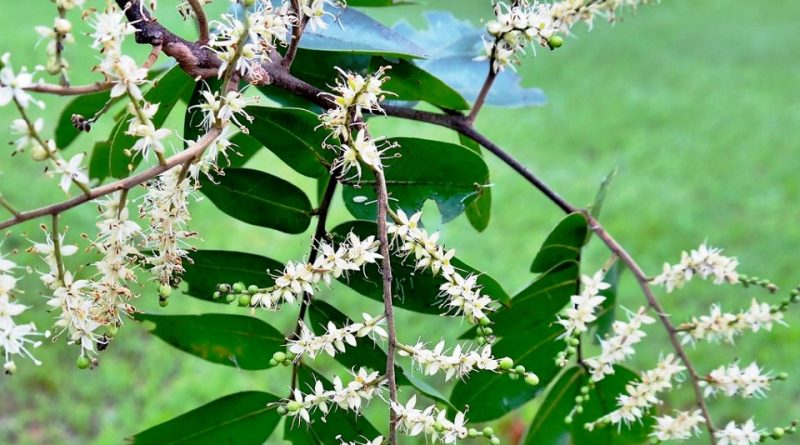 Etymology –
The term Copaifera, most likely, derives from the word copal which is a semi-fossil resin still produced today by various tropical plants, often by legumes.
The specific epithet langsdorffii is in honor of GI Langsdorff, who was the Russian consul in Rio de Janeiro. Langsdorf was in charge of an expedition to explore the interior of Brazil in the 1820s.

Geographic Distribution and Habitat –
Copaifera langsdorffii is a plant that grows in a vast range that includes South America, and in particular: Argentina, Paraguay, Brazil, Bolivia, Guyana.
Its habitat is the rainforest and it is found in primary and secondary forests, especially in the transition areas between forest and savannah, often on well-drained soils free from flooding.
The tree tolerates annual rainfall of 1000-4000 mm, annual temperature of 20-27 degrees ° C (without frost) and soil pH of 4.5-7.5; it also grows well on dark red latosols and lithosols. 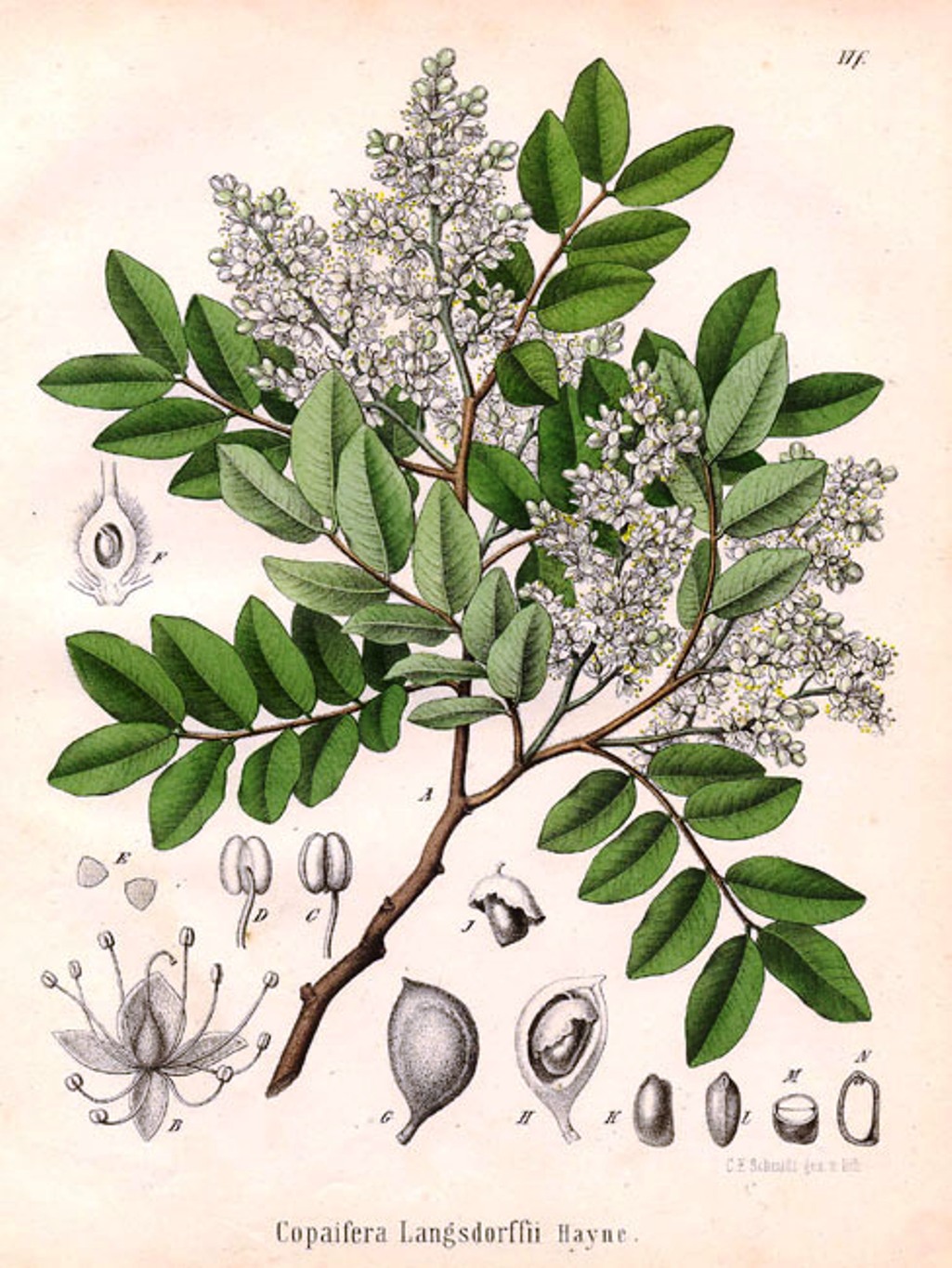 Description –
Copaifera langsdorffii is a medium to large tree that usually reaches 12 m in height.
The leaves are darker green on the upper page, ovate lanceolate and opposite on the branches.
The flowers are white, small and collected in inflorescences.
The fruits are small and oily.
The wood is light due to its porosity and is alveolar with oil-filled capillaries.

Cultivation –
Copaifera langsdorffii is a plant from the humid and subtropical tropics that requires high humidity and a minimum temperature that does not drop much below 13 ° C.
It thrives well in areas where the average annual rainfall can be between 1,000 and 4,000 mm and prefers a sunny, well-drained sandy soil.
It tolerates a pH between 4.5 and 7.5 and now stabilized plants tolerate both drought and some stagnant soil water.
The tree has a rather slow growth, two-year-old specimens are generally less than 2 meters tall.
Trees tend towards a three-year pattern of seed production. on average a single copaiba tree can provide around 40 liters of oleoresin per year, making it a sustainable rainforest resource that can be harvested without destroying the tree or forest in which it grows. Trees can produce up to 55 liters of resin per year.
The resin accumulates in the cavities inside the tree trunk and is collected by tapping or drilling holes in the wood of the trunk and collecting the dripping resin, much like collecting maple syrup.
When the tree is tapped, the initial oily resin is transparent, thin and colorless; it thickens and darkens on contact with air. The resins that are sold commercially are a thick and clear liquid, with a color ranging from light yellow to light golden brown
The propagation of the plant occurs by seed which must be done by sowing the same as soon as it is mature in a semi-shaded position in a nursery or in individual containers. The germination rate is over 60%, with seeds sprouting within 20 – 40 days.
However, the plant can also be propagated by woody cuttings.

Customs and Traditions –
The Copaiba langsdorffii, also known as the diesel tree, is known by many names in the local languages, including: kupa’y, cabismo and copaúva.
The tree, as mentioned, produces terpene hydrocarbons, present in the wood and leaves, and this had aroused interest in the search for renewable energy sources. According to the first anecdotal reports cited, the tree could be exploited for a production of 40 liters of oil, and a hectare with about 250 mature plants could produce just over 61 barrels of oil per year.
These reports were released in 2007 by the Australian media after an Australian citizen from Mackay, Queensland imported seeds of the plant in hopes of growing diesel fuel in Australia. However, a 2003 study showed that actual oil yields are significantly lower: small trees, with a chest height of 35 centimeters, do not produce oil; and medium-sized trees (between 55 and 65) produced more oil than large ones (with a diameter greater than 65). No tree in the study produced more than 1 liter of fuel. A 2006 study by Oliviera et al. He agreed with the 2003 study and also found that the best time to exploit the trees was spring.
The main compound in the oil is copaiba (15%), an oleoresin useful in the production of petroleum products such as lacquers and can be used as biodiesel. After filtration, this oil can be used in the engine of a normal diesel car. It seems that some natives use the fuel for cooking.
Other uses include that of wood which is highly resistant to natural decay, and as such is used in carpentry where the tree is native.
Also, in beekeeping, European honey bees are strongly attracted to the tree for its pollen, making it a mainstay of Brazilian beekeeping.
As for uses in medicine, natives of the Amazon use the oil collected from the tree as traditional medicine: mainly as an expectorant and antiseptic, but also for the treatment of skin diseases such as eczema and dermatosis. It was also recently discovered that this oil is extremely good as a healing agent, thereby increasing the value of the oil.
The oily resin, obtained from the trunk of the tree, has a very long history of medicinal use. It was widely used by native peoples before Europeans reached South America and these uses were soon taken over by Europeans. The resin is particularly appreciated for its ability to counteract the mucous membranes of the chest and the genitourinary system.
Resin is an aromatic and stimulating herb with a bitter, burning taste.
Both it and the cortex are anodyne, antacid, antibacterial, antifungal, anti-inflammatory, antimicrobial, astringent, cytostatic, emollient, digestive, disinfectant, diuretic, expectorant, slightly laxative, vermifuge and vulnerable.
The resin obtained from the trunk contains a number of medically active components, including 30-90% essential oils and unusual condensed tannins.
The essential oil contains alpha and beta-caryophyllene, sesquiterpenes, resins and terpenic acids.
This improves digestion, has diuretic and expectorant effects, and controls bacterial infections.
Much of the clinical research carried out to date has verified the traditional uses of copaiba. For example, it has been shown to be highly effective as a topical wound healing and anti-inflammatory agent. The anti-inflammatory effect is mainly due to sesquiterpenes, in particular caryophyllene which has also shown effective pain relieving properties, antifungal properties against nail fungus and gastroprotective properties.
The resin as a whole (and, in particular, two of its diterpenes – copalic acid and kaurenic acid) demonstrated significant antimicrobial activity against gram-positive bacteria. One of Copaiba’s other chemicals, kaurenoic acid, has also demonstrated selective antibacterial activity against Gram-positive bacteria in other recent studies.
Furthermore, other constituents of the resin have demonstrated significant antitumor activity.
The resin is absorbed internally in the treatment of a number of respiratory problems such as tuberculosis, bronchitis and sinusitis; diseases of the urinary tract and reproductive system such as cystitis, kidney and bladder infections, vaginal discharge and gonorrhea.
Stomach ulcers, tetanus, herpes, pleurisy, and bleeding are just some of the other conditions treated with the resin.
The resin has been officially approved in the United States as a food additive and is used in small quantities as a flavoring agent in foods and beverages.

Preparation Method –
The resin can be used externally, in the treatment of a number of skin problems including insect bites, eczema, chilblains, sores and psoriasis. It is also used to heal wounds and stop bleeding.
It is also used for antiseptic gargling and is used to treat sore throats and tonsillitis.
It is used in infusions or distillates for its essential oil.
The resin must be used with care and is extracted through the threads to the tree trunks at intervals and then the holes are filled.