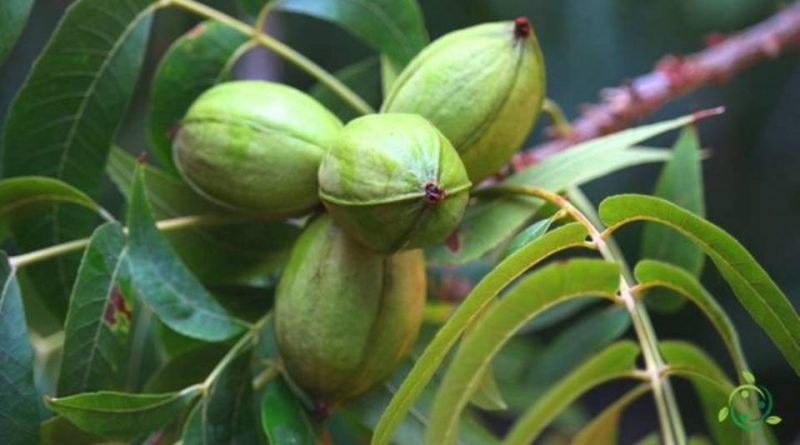 Pecan (Carya illinoensis (Wangenh.) K. Koch) is a fruit and wood tree of the Juglandaceae family, cultivated mainly in North America for the harvest of its fruits which are called: pecans.
It is a species native to the eastern part of the United States of America (southern states of Illinois and Iowa, Kansas, Missouri, Oklahoma, Texas and Virginia) which has adapted and spread in throughout the northern part of the American continent.
In Europe it was introduced in the nineteenth century, but it had little diffusion.
Pecan is grown in southern Italy in small specialized plots in Sicily and in the southern sector of Puglia. The varieties grown in Italy are: Kiowa, Wichita and Shoshoni.
Pecan is a monoecious and self-fertile species, with a marked dichogamy in most of the cultivars.
It is a very long-lived tree that in spring produces elongated male flowers, and rounded female flowers on long spikes.
The fruits have a smooth and thin shell, of variable size according to the variety, with a pleasant flavor kernel.

Propagation needs –
Pecan is a fast-growing plant that adapts to different pedoclimatic environments, as long as they are warm, due to the long length of the vegetative period. It is also a deciduous plant that resists low winter temperatures (down to -10 ° C) well.
The pecan nut cultivars are numerous and differ in the quantity of fruit produced as well as in physical peculiarities; including the width of the leaves.
Western species are those that best adapt to hot climates characterized by sporadic and not very abundant rains. These are grown in the area of ​​Texas and New Mexico and are characterized by a production that is not too high but with excellent organoleptic qualities.
The Nordic species, on the other hand, do not fear the cold and have become accustomed to making the most of the high levels of humidity to which they are subjected daily. These produce less flavorful fruits later in the season than all other varieties.
The most cultivated Nordic species are the Colbys and Giles which produce much larger than average fruit.
Among the varieties of American origin grown in Italy we remember: Kiowa, Wichita and Shoshoni.
The propagation of Carya illinoensis occurs almost exclusively by grafting. In this way it is possible to use grafts resistant to some parasites that are very harmful both for the plants and for the crop. Adult trees reach considerable size and precisely because of this particularity, they must be planted in large spaces that are no smaller than twelve square meters.
For the cultivation technique, see the following sheet.