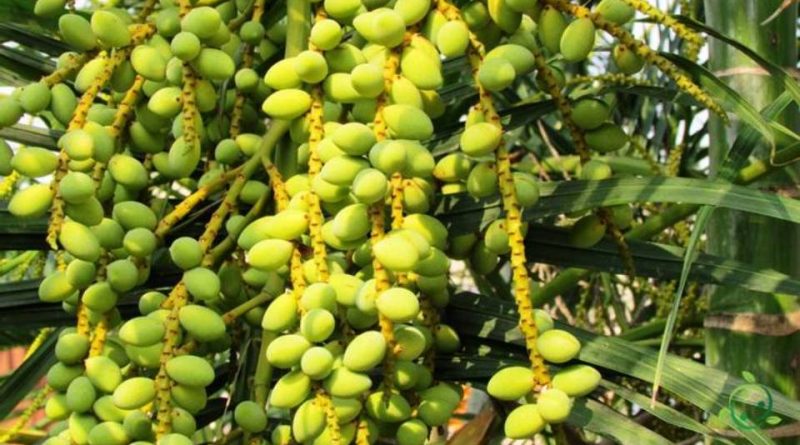 The date palm (Phoenix dactylifera L., 1753) is a plant of the Arecaceae family that boasts an ancient history so much that it has been cultivated since ancient times among the Egyptians, the Carthaginians, the Greeks, the Romans, the Berbers for its edible fruits called dates.
The typical cultivation areas of the date palm are those located mainly in the Maghreb, Arabia, Egypt, the Canary Islands, some southern areas of the United States and the Persian Gulf.
In Italy the date palm is cultivated in Sicily, especially in Palermo, even if in these areas the cultivation has been done for a long time mainly for ornamental purposes.
The date palm is a dioecious plant, therefore with male trees and female trees; both have clear flowers grouped in cluster-shaped inflorescences, with a diameter of 5cm and a weight of almost 25kg. Pollination occurs thanks to the wind or insects, but in plants grown for commercial purposes this is done artificially.
It should be emphasized that there are several varieties of this palm, but we can easily group them into three groups:
– soft fruit, very demanding from an environmental point of view, whose fruits, large, tender and valuable, are eaten fresh and have a very high cost;
– semi-soft or semi-hard fruit, the fruits of which are dried to help their conservation and whose cultivation and sale remain within intermediate costs;
– hard-fruited, with high productivity and resistant to the most hostile environmental conditions; however, as dates are not very valuable, they are used for food flour or for feeding livestock.
Regarding the multiplication of the Phoenix dactylifera there are two techniques: by suckers or by seed.

The first is propagation by suckers:
– in this technique the suckers, which are branches that develop at the foot of the plant or from the root itself, must be removed from the mother plant and planted in the ground after a year. Starting from this multiplication it will be necessary to wait at least six years to have the first fruit production.
The second is sowing:
– with this technique the seeds must be removed from the pulp from the dried dates; at this point they must be rinsed and immersed in water for a few days. Remember to change the water every ten hours. After which they are dried and stored in the warehouse or at home wrapped in paper. Once in the period between February and March, the seeds can be planted at a depth of 4 cm in a jar. It is good that inside the pot there must be soil mixed with peat and sand, with which to cover the seeds as well. at this point it is necessary to irrigate with water at room temperature, placing the pots in a sunny place with stable temperatures around 12 ° C and taking care to keep the soil moist. After a period of about two months, the seeds will have started germinating. At this point, once the root system is well formed, the different seedlings will have to be arranged (if not done before) in individual jars.
Among the varieties of date palm are mentioned:
– Majhool, Deglet noor, Ameri, Deri, Halawi and Zahidi, Berhi and Hiann.