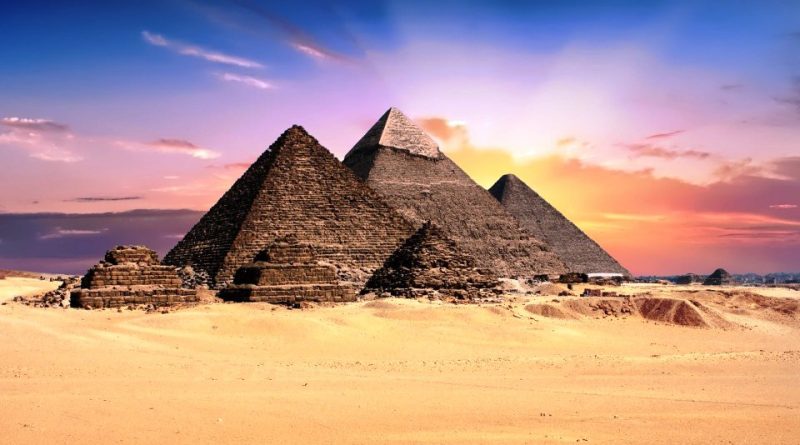 Egypt is a transcontinental country that crosses the northeast corner of Africa and the southwest corner of Asia across a land bridge formed by the Sinai Peninsula.
Egypt has an area of ​​1,001,000 km2 and borders the Mediterranean Sea to the north, the Gaza Strip and Israel to the northeast, the Gulf of Aqaba to the east, the Red Sea to the east, Sudan to the south and Libya to the west.
Egypt has a population of about 100 million inhabitants who live near the banks of the Nile River, on an area of ​​about 10,000 square kilometers, where the country’s only arable land is located. The large regions of the Sahara Desert, which make up most of the territory of Egypt, are sparsely inhabited. In addition, about 42% of Egypt’s residents live in urban areas, with the largest spread of all densely populated centers in Cairo, Alexandria and other large cities of the Nile delta, such as Mansura.
Egypt has very few rivers, but it does have the Nile, the most important in the country, as well as the longest river in the world. The Nile originates from the great African lakes, in the central area of ​​the continent, and in its last stretch it crosses the eastern part of Egypt from south to north.
For Egypt, the Nile was the river that characterized its history so much that it was of vital importance for the flourishing of ancient civilizations.
The Nile is almost entirely navigable, with the exception of the course near the first cataract, to the south. It flows on a large bed for some stretches set between high rocky walls. The Nile delta, called Kantar, is rich in sand bars, and is crossed by a dense network of artificial canals.

Climate –
The climate of Egypt is of the desert type with the exception of the Mediterranean area where it is more temperate, although considerably drier than the average. The climate is characterized by mild winters, although there is no lack of winter frosts in the desert, due to the strong temperature variations between day and night. Summers are very hot and dry (the Red Sea coasts tend to be more humid but remain desert-like in terms of precipitation), and temperatures easily reach 43-45 ° C, with peaks of over 50 ° C in the desert . Rainfall is very scarce, especially in inland Saharan areas, where it may not rain for many months. Torrential rains sometimes occur, but only a few times a year.
The climatic characteristics and the presence of the Nile River, as well as the oases characterize both the flora and fauna of Egypt.
The flora of Egypt, and in particular the flora of the Nile, was very rich since the time of the pharaohs. Papyrus, lotus water lily, reed and acacia grew abundantly in the internal valley and in the oases; next to them flourished then the sorghum wheat, barley, flax, several vegetables (lettuce, onion, garlic) and the vine, and, again, the palm palm (Hyphaene thebaica) with palmate leaves and the date palm (Phoenix dactilifera) with pinnate leaves, the carob, the fig, the tamarisk and the sycamore fig. On the other hand, there were no tall trees, suitable for providing good timber, and there was no olive tree, which, however, was made up of by the castor plant from which oil was extracted.
As for the fauna, the elephant was present in the South and the hippopotamus, the cheetah, the lion, small monkeys of the vervet and cynocephalic families, the crocodile, an archaic species of sheep, goats, antelopes, gazelles, bovids were present throughout the territory. and donkeys, and again jackals, wild cats, hares and hyenas, fish in large numbers and varieties, small snakes (cobras and viperids).
Already around 2600 BC several of these animals were widespread in domestic and selected varieties (ox, donkey, sheep, along with goose, duck and pigeon); others, such as the hen and the horse, were imported around 1500 BC. from the East. Bees were then raised extensively in all ages as suppliers of honey and wax. 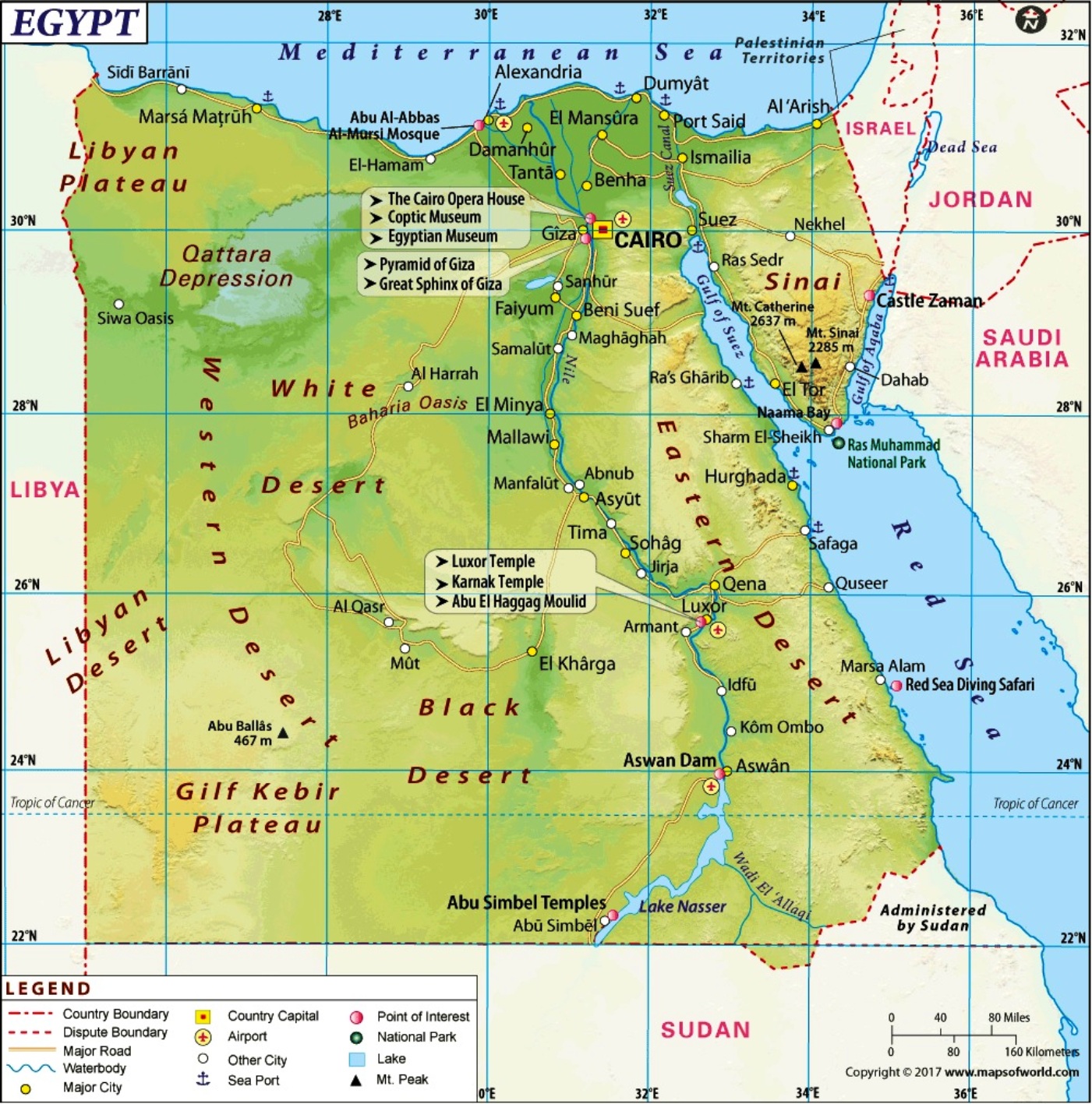 Flora –
Papyrus is certainly the most characteristic Egyptian plant, considered by the ancient Egyptians as a symbol of gestation, joy and youth. The papyrus plant was used in the kitchen, to make sandals, baskets and sheets, but also in the nautical field to caulk boats, make sails and ropes and build small rafts. When it was transformed into white and resistant paper, indispensable for hieroglyphic writing, the papyrus acquired its immense value for history, allowing precious texts to be handed down over the centuries for the knowledge of Egyptian civilization. Today the papyrus is still present although in a few areas along the Nile (and in Italy along the Ciane river in the province of Syracuse)
Three types of palm have been cultivated in Egypt since ancient times: the date palm (Phoenix dactylifera), the argun palm (Medemia argun) and the dum palm (Hyphaene thebaica)
The sycamore fig (Ficus sycomorus) is a plant found in East Africa, particularly in Egypt.
The tamarisk or tamarisk is a tree that lives in the coastal regions; it is used for ornamental purposes and as a windbreak.
The carob is another tree that is particularly common in Egypt. There are different hypotheses on its area of ​​origin.
Also important is the history of medicinal plants that boast very ancient crops and uses.
Ancient Egyptian writings confirm that herbal medicines have been used in North Africa for millennia. The Ebers Papyrus (1500 BC), one of the oldest medical texts available, includes more than 870 prescriptions and formulas and 700 medical herbs. Among the most used today, alpha alpha or alfalfa and fenugreek (called “helba”), which was used in Ancient Egypt by women of marriage age for its fattening properties.

Fauna –
An interesting fauna still lives on the expanses of sand, along the Nile or in the depths of the Red Sea. The Nile valley represents an oasis of remarkable fertility for avifauna, in particular for migratory birds.
There are 100 species of mammals, although those that once inhabited the deserts (leopards, cheetahs, oryxes, striped hyenas and coracals) have been victims of hunting, and are therefore considered endangered. Other animals such as the sand cat, the desert fox and the Nubian ibex have rarely been sighted. However, there are three types of gazelles, which are also in danger of extinction.
The dromedary is an animal of strategic importance. Mount, pack animal, producer of milk, meat and skin: essential products for the peoples of the desert.
As for the avifauna, currently the birds in Egypt are represented by over 400 species, mostly migratory.