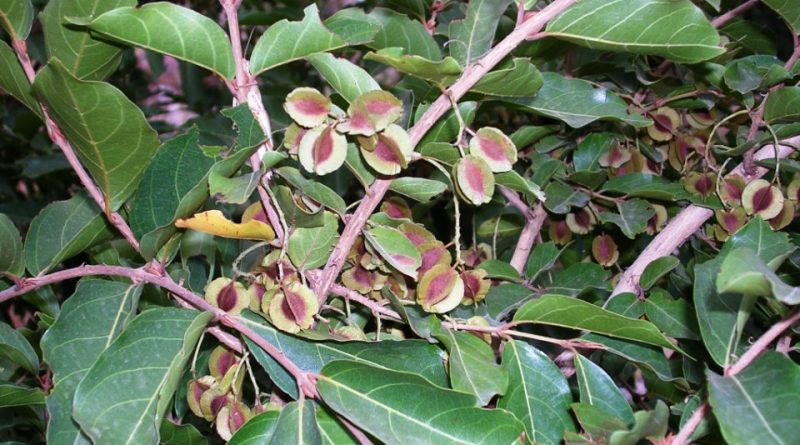 The kinkeliba (Combretum micranthum G. Don) is a shrub or small tree species belonging to the Combretaceae family.

Etymology –
The term Combretum is due to the name used by Pliny for an unidentified climbing plant of another genus; according to a French edition of 1809 by Linnaeus from a Greek word meaning adorned, dressed, for seeds bristling with hair.
The specific micranthum epithet comes from the Greek μικρός micrós small and from ἄνϑοϛ ánthos fiore: with small flowers.

Geographic Distribution and Habitat –
kinkeliba is a plant native to tropical Africa, mainly from the driest tropics, where it is found at altitudes of up to 1,000 meters.
Its habitat is in the arid areas of the savannah, on sandstone, clay, laterite, crystalline rocks and skeletal soils. 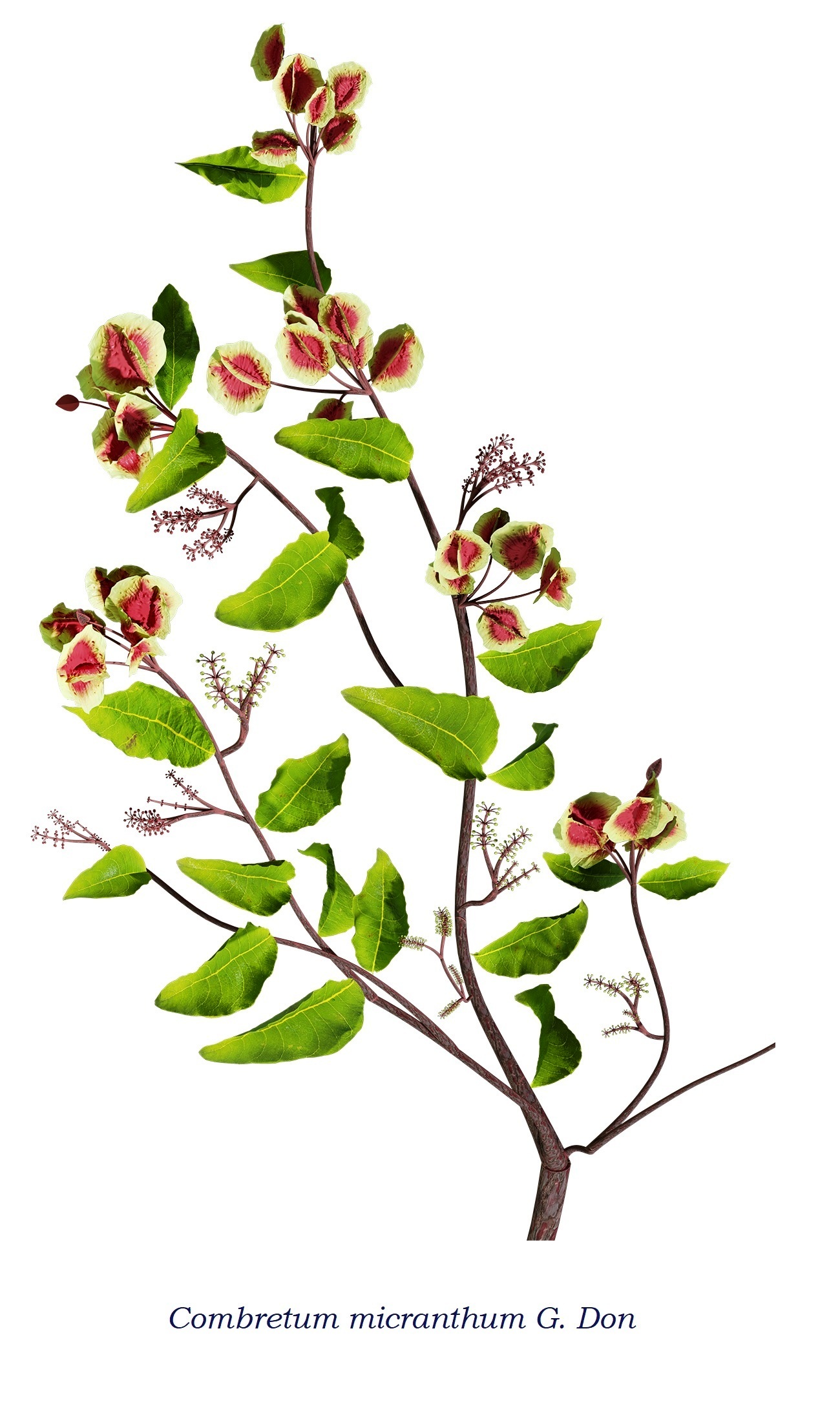 Description –
Combretum micranthum is a plant that can vary greatly in shape depending on its habitat. It often occurs in the form of a shrub or small tree that grows from 2 to 5 meters in height; under favorable conditions it can reach a height of 10 meters. It can also assume a climbing conformation, twisting around the branches of nearby trees and producing stems that can be 20 meters long.
the leaves are oval with a leathery consistency and dark green color;
The flowers are small and white.

Cultivation –
kinkeliba is a poor soil indicator plant, often found in termite nests, although the roots are susceptible to attack by termites.
It grows best in areas where annual daytime temperatures are between 22 and 35 ° C, but can tolerate 10 – 45 ° C.
Mature plants can be killed in temperatures of -5 ° C or below, but new growth can be severely damaged as early as -1 ° C.
It prefers an average annual rainfall of between 500 and 1,300 mm, but tolerates 300 – 1,500 mm and requires a sunny location.
From a pedological point of view it grows well on sandstone, clay, laterite, crystalline rocks and skeletal soils, with a pH between 6 and 7, tolerating 5.5 – 7.5.
It grows well on dry soils and is very resistant to drought once it takes root.
Plants can recover from damage caused by forest fires.
As for propagation, it can be multiplied by seed which must be pre-soaked for 24 hours in water to increase the germination rate. Removing the cover structures from the seed can also improve the level of germination. Germination rates are generally high, up to 100%.
The seed can be stored for a long time. A germination rate of over 96% was obtained from 4-year-old dried seeds stored at 4 ° C.

Customs and Traditions –
Combretum micranthum is known as kinkeliba in Benin, Burkina Faso, Senegal, Mali and Gambia.
It is used to make tea and has uses in traditional medicine, and is used by many West African Muslims during Ramadan to break the fast. The name kinkeliba (meaning “tree of health”) is believed to derive from the Fulani language. It is referred to as sekhew in the Wolof language and ŋɔlɔbɛ in the Bambara language.
The drug used is represented by the leaves collected before the evolution of the fruits.
The active ingredients are:
– combretin, catechin, catetic tannin, flavonoids, potassium nitrate, organic acids, coumarins, sterols, terpenoids, carbohydrates and alkaloids.
It is traditionally used in Senegal and Mali for fatigue, liver problems, headaches, convalescence, blood diseases, weight loss, cancer, sleep problems and is particularly used for Muridiyya fasting in Senegal. It is one of the important plants of Nigerian medicine.
The branches are strong enough and are a useful material for building stools, beds, tool handles, etc.
A tea made by soaking the leaves in boiling water is a traditional tonic drink in tropical savannah countries such as Senegal, Mali, and Burkina Faso. It is believed to aid in weight loss and have detoxifying properties.
Among West African Muslims, most notably Wolofs, Fulas, and Mandinkas, kinkeliba leaves, bark, and twigs are harvested and sold in bundles during the dry season that precedes and accompanies the month of Ramadan. The plant is used daily to make strong tea that is mixed with sugar and milk and is drunk with bread at sunset as a means of breaking the daily fast. Kinkeliba is used specifically for this purpose because of its sweet taste and because it is believed to be an appetite stimulant, as those who have fasted want to be able to enjoy the richest food possible in the evening after not eating from sunrise to sunset.
In Burkina Faso, a decoction of the leaves is used as a drug for malaria.
As for the pharmacological effects, it has been shown that the plant leaf extract contains a number of polyphenolic compounds. These compounds are known for antioxidant activities and have shown potential for diabetes prevention. The whole plant is variously used to treat diseases such as viral hepatitis and others. In particular, kinkeliba is able to increase urinary secretion and facilitate the evacuation of bile. Almost specific, against bilious and hematonic fever.
Kinkeliba can be used as a fluid extract for jaundice and gallstones. Thus the wood and the leaves of kinkeliba are used against anemia, as a tonic, febrifuge with a consumption of one liter per day for three days or more, depending on the severity.
Kinkeliba can replace coffee or tea for breakfast.
It is also used in the treatment of constipation, stimulation of digestive function and appetite. Treatment of gallstones: stimulating action on biliary function. Anti-inflammatory and antibacterial: soothes people suffering from infectious diarrhea. Urinary disorders: promotes urinary excretion. Complement of weight loss diets.
Among the edible uses it should be remembered that the leaves are used to prepare the “quinquelibas drink”, a refreshing tea.
Drinking tea is said to help a person get used to the local climate.
The seeds are also edible.
The roots are used to rinse the eyes.
Combretum micranthum is also used for agroforestry uses, as the plant, as mentioned, is often seen as an indicator of poor and nutrient-poor soils in nature.
The internal fibers of the bark are used for binding and ropes.
The timber is used as a rattan, for roof frames, for huts and mezzanines, making baskets, furniture and walking sticks; furthermore, wood is used as fuel and to produce coal.
Finally, as regards the contraindications, it has been reported that it can cause gastrointestinal disturbances.

Preparation Method –
The plant is used for various medicinal and food uses. In particular it is used daily to prepare strong tea that is mixed with sugar and milk and is drunk with bread at sunset as a means to break the daily fast.
In Burkina Faso, a decoction of leaves is prepared as a drug against malaria.
The leaves, the root and the stem are used, which are boiled in water for fifteen to twenty minutes and then left to infuse for a few minutes, adding sugar and milk to taste. It is possible to use a decoction of kinkeliba for cereal porridge for a sick person.