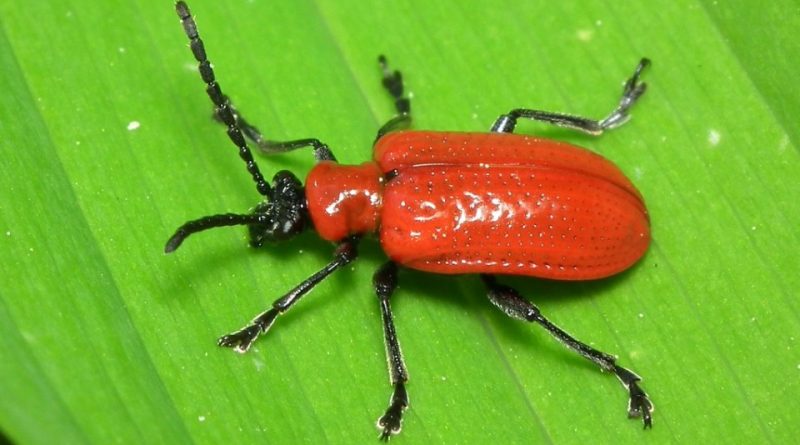 The Scarlet lily beetle (Lilioceris lilii Scopoli, 1763) is a beetle belonging to the Chrysomelidae family.

Geographic Distribution and Habitat –
The Scarlet lily beetle is a species native to Eurasia where it has become a weed in temperate zones, where there are cultivations of Liliaceae, but it is also present in the American continent where it is thought that it was introduced in North America through the import of plants in 1943.
This insect is widespread throughout the Italian territory.

Morphology –
Adult individuals of Lilioceris lilii are 6-8 mm long.
The body, legs and antennae are black, while the prothorax and elytra are bright red.
The eggs are ovoid, cylindrical, orange in color, laid in small groups along the lower pages of the leaves.
The larvae are 9-10 mm long, brownish orange in color and with a black head. These surround themselves with blackish droppings, which when dried form a cap to protect predators. They feed for a period of about 16-24 days and then pupate in the ground.
From the chrysalis stage, which lasts 16-22 days, the adults emerge.

Attitude and Life Cycle –
The Scarlet lily beetle is active in the period of March-April, in which the mating and the oviposition on the vegetation take place, which last until the end of autumn, and then overwinter at the end of autumn in various shelters.
Larvae and adults feed on leaves, stems, buds and flowers of plants belonging to the Liliaceae family; in particular parasitize the genera Lilium sp. and Fritillaria sp. and with adults who consume relatively little plant matter.
The main damages are caused by the larvae frequently leading to the total defoliation of the plants.

Ecological Role –
In Europe, the total parasitism rate in the last stage averages about 90% in wild Lilium martagon, 75% in gardens and 60% in cultivated lily fields. Most of the parasitoids of this insect are wasps that lay their eggs inside the host and effectively kill all infected individuals. Diaparsis jucunda dominates over 90% of parasitoid infestations of Lilioceris lilii, however, in gardens and commercial fields, Tetrastichus setifer and Lemophagus pulcher become the dominant parasitoids in the following season.
At the moment, the situation of the natural predators or parasites of Lilioceris lilii in North America is different. In 1996, the University of Rhode Island began testing the biological control effectiveness of this coleooter using six natural parasitoids from Europe. CAB International Bioscience Switzerland Center also participated in this project from 1998 to 2001. The European parasitoid wasp Tetrastichus setifer was used in Massachusetts from 1999 to 2001; the experiment showed a reduction in the beetle population. Population decline was also observed at another test site in Rhode Island. In 2003, another parasitoid, Lemophagus errabundus, was released in Massachusetts and is now established in the region. Similar parasitoid releases were made in Boston with positive results.
Given the evolution of parasitic biocenoses, at the moment when there are few plants in a garden, it is advisable to collect the adults and the larvae and eliminate them mechanically. The control on the plants must be done very frequently, because the adult insects fly, mate on the plants and immediately lay their eggs on the underside of the leaves.
If it becomes necessary to contain the beetle, we recommend, therefore, at the first appearance of the insect an intervention with a liquid insecticide based on natural pyrethrum (allowed in organic farming), which can be used both on ornamental plants and on plants from the garden as it is allowed in organic farming. It has a very rapid killing capacity and also performs a repellent action to avoid future infections.
For the intervention it is recommended to shake the product before use, dilute it in water following the doses indicated on the label and spray it. It is advisable to abundantly wet the plants to be protected with this solution, in order to be sure that the product covers the entire crop: take particular care of the underside of the leaves. The operation must be repeated after a week. However, treatments should not be done during flowering.