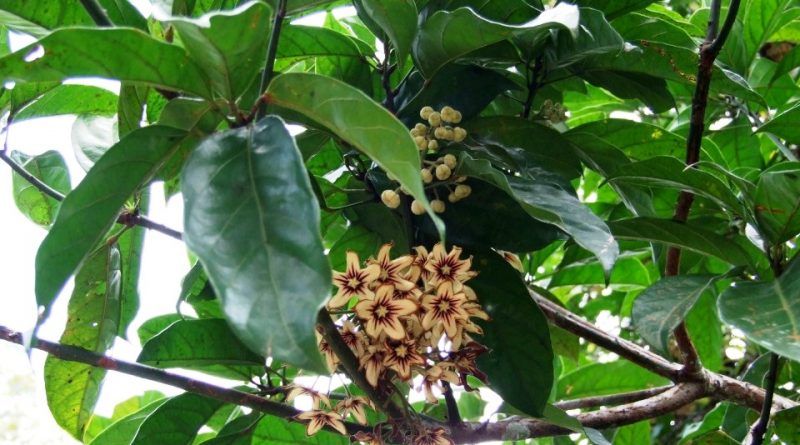 Geographic Distribution and Habitat –
Cola nitida is a tree native to the rainforests of tropical West Africa and precisely to an area that includes Sierra Leone, Liberia, Ivory Coast, Ghana and Nigeria.
It is a lowland tree but can be found up to altitudes of about 300 meters above sea level. in areas with deep, rich soils and evenly distributed rainfall. 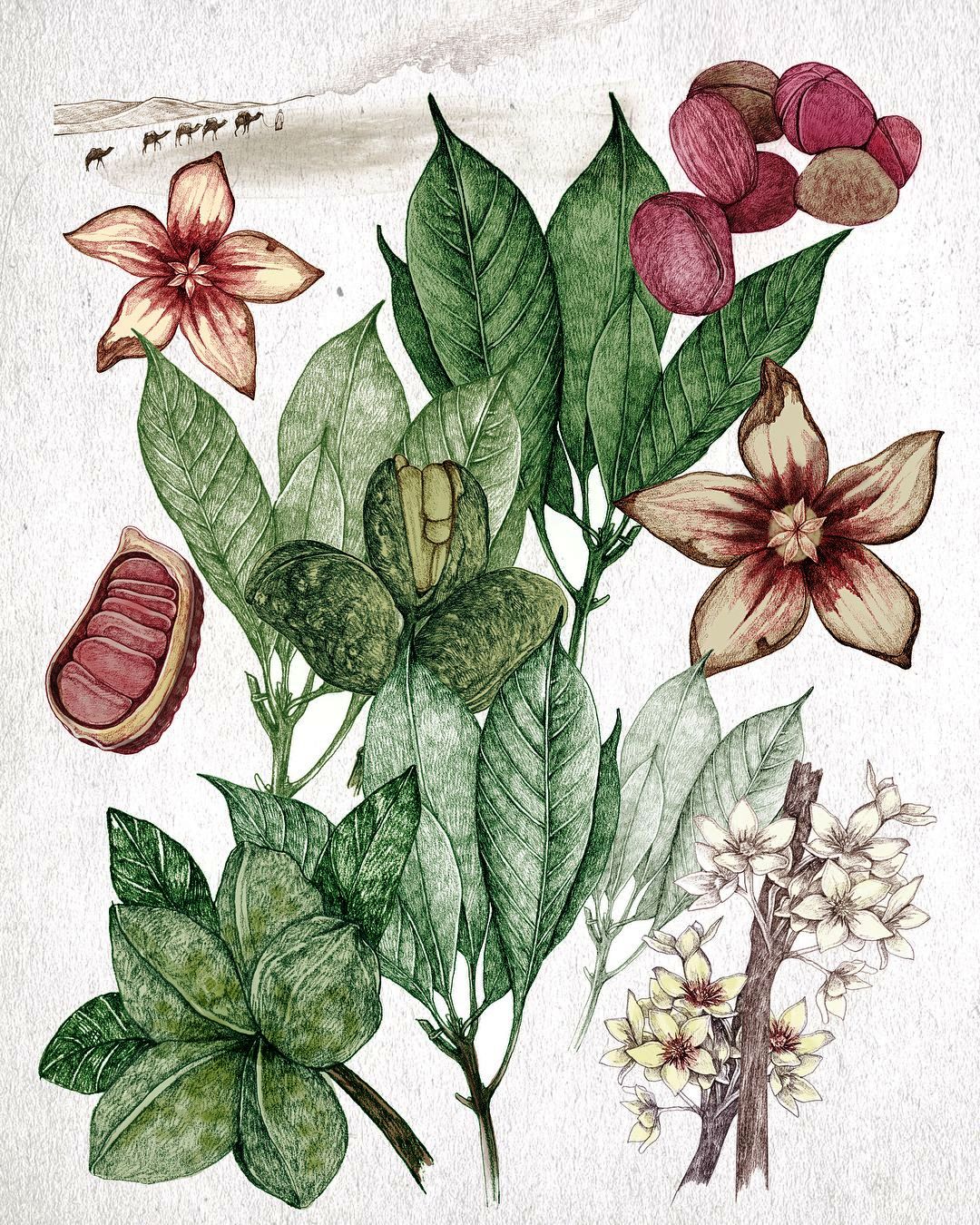 Description –
Cola nitida is an evergreen tree that grows to a height of 12 to 20 meters.
The trunk has a maximum diameter of 1.5m and older trees develop buttresses. The bark is thick and fibrous, with deep longitudinal cracks and is gray or brownish-gray in color, with the reddish-pink wood becoming visible when the bark is damaged.
The leaves are alternate, oblong, glabrous, leathery and hard, with undulating edges, not toothed and up to 33 cm long.
The flowers have a pentameral geometry and grow in panicles from the axils of the leaves and have no petals. Male flowers have a deeply lobed cup-shaped calyx of about 2 cm in diameter with two stamen swirls. The female flowers are larger with a diameter of 5 cm with five carpels. The glass is yellow with red parts.
The fruits are fleshy and up to 13 cm long and 7 cm wide. When ripe, the pods open to reveal seeds which may be mottled with white, reddish-gray or brown. The seeds are bitter when fresh but become more aromatic as they age.

Cultivation –
Kola nut is a plant grown in various parts of tropical Africa as well as in India, Jamaica, Brazil and Hawaii.
This plant can grow where there is about 1,200 mm of rain, but develops best where annual rainfall exceeds 1,700 mm, spread over eight months or more. Its optimum temperature ranges from 23 to 28 ° C and grows on both light and heavy soils as long as they are deep.
The plant starts producing at the age of four.
The pest responsible for most of the damage is the Balanogastris kolae weevil which attacks fruits and nuts either on the tree, in the ground or during storage.
Harvesting occurs before the pods begin to open. The peasants climb trees with a long blade armed stick to pluck the pods but also collect the fallen fruit. The average yield of one hectare of cola is 5 tons.
The nuts are then extracted from the pod using a knife or machete.
The next step is pulping: it consists in removing the pulp covering the nuts with a sharp object. To facilitate the operation, the walnuts are left to soak in water for a few days.
To keep the nuts in a fresh state, they are treated with an insecticide. These are kept away from light, in a basket lined with attiéké leaves (Thaumatococcus) or in a plastic bag.

Customs and Traditions –
Kola nut seeds contain caffeine and are chewed as a stimulant and used in the production of soft drinks. Nuts and other parts of the tree have many uses of a ceremonial nature and in traditional medicine. Wood has multiple uses.
In addition to caffeine, nuts contain theobromine and tannins. Dried fruit is used in the production of “cola” drinks. Other ingredients in these drinks include spice oils, other flavor compounds (sometimes including the leaves of the tree), caramel to color, sweeteners, phosphoric or citric acid, and carbon dioxide to provide effervescence.
Walnut has traditionally been used as a stimulant when chewed. It is said to reduce fatigue, prevent hunger pangs, increase mental activity and reduce the need for sleep. Parts of the plant are also used in rituals such as weddings, childrens ceremonies, induction of village leaders, funerals and sacrificial ceremonies. The leaves, twigs, bark, flowers and nuts are also used in traditional medicine. Cola nitida is closely related to Theobroma cacao, the cocoa tree, and nuts have been used as the main ingredient for chocolate with a high melting point.
The nut is used in dyeing and water purification. Timber is used in construction, boat building, furniture and woodworking, musical instruments, tools and carving. Also useful as firewood. The pods have been used to make fertilizer and soap and can be used as a substitute for up to 60% of the corn in poultry feed.
Moreover, and certainly not least, this plant is used to produce the most famous drink in the world after water and whose flowers change color once pollinated to warn insects as well as to warn them that they must go to find somewhere else to find good nectar.

Preparation Method –
Fresh kola nuts are chewed by many Africans for their stimulating properties and as appetite suppressants. As mentioned, they also play an important role in the rites and customs of social life.
Offering a few peanuts to someone is considered a sign of kindness and courtesy. They are known to be aphrodisiacs.
The leaves, fruits and roots are used as a tonic or against dysentery, diarrhea.
The kola nut is used in the composition of wine, syrups, candies, chocolates and pastries.