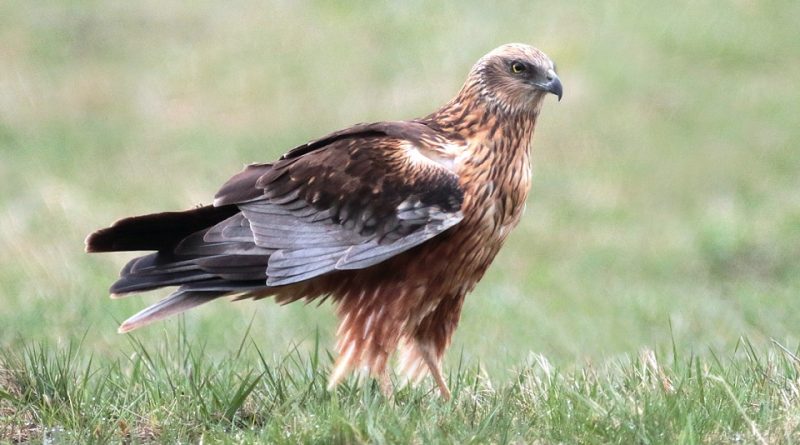 The Western marsh harrier (Circus aeruginosus (Linnaeus, 1758)) is a bird belonging to the Accipitridae family.

Geographic Distribution and Habitat –
The Western marsh harrier is a bird found in Europe, Asia, and Africa.
In Italy there are scattered nesting with the greatest presences in the Po Valley, in Salento, Calabria and Sardinia.
The northern and most of the southern populations of this bird are migratory.
Its habitat is represented by wetlands rich in emerging marsh vegetation, especially fragmiteti and in general in the reeds near marshes and marshes. 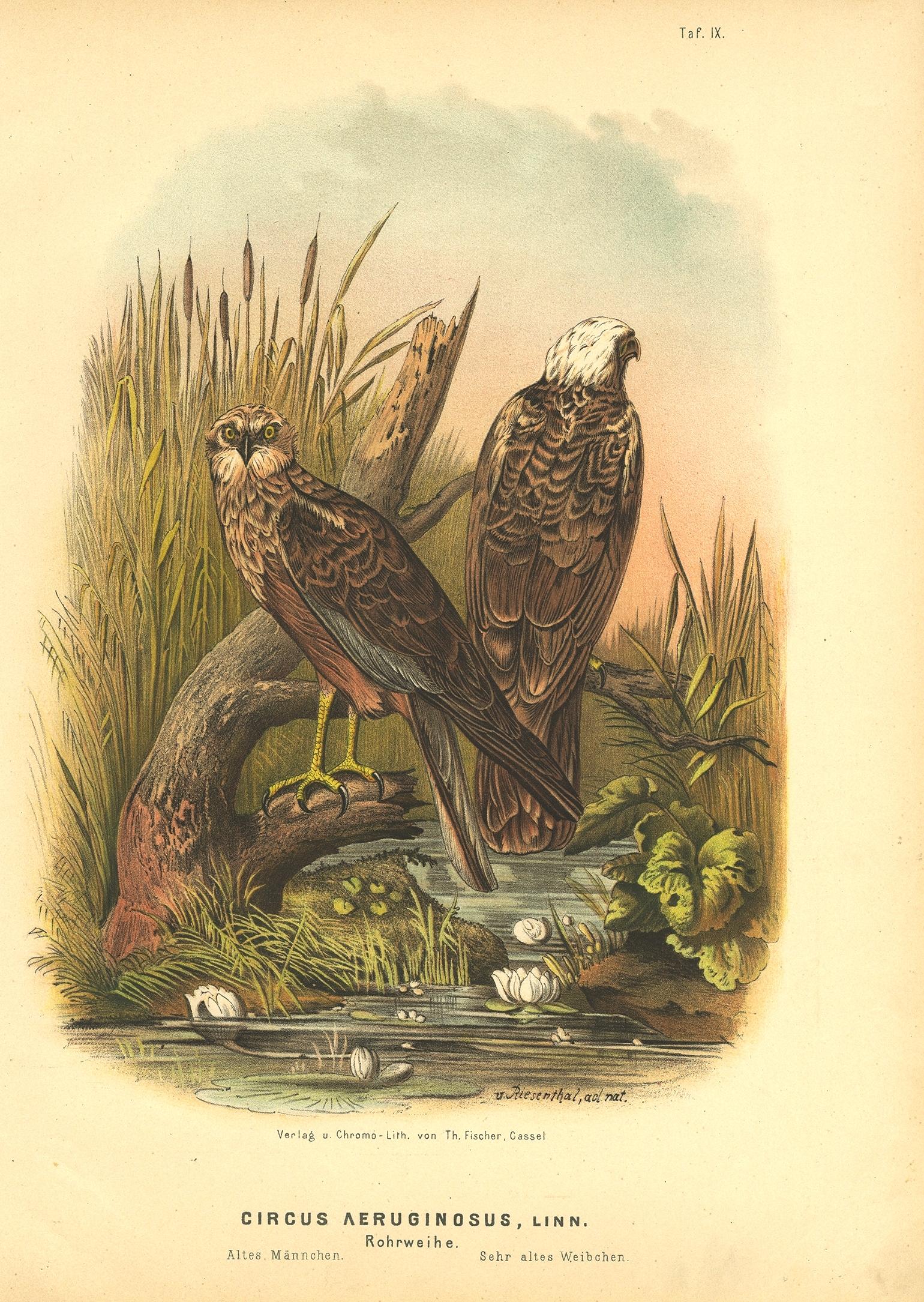 Description –
Circus aeruginosus is a bird, with the presence of sexual dimorphism, with a size of 48-55 centimeters in length, a wingspan of 110-125 cm, for a weight which in males is 400-650 gr. and in females of 500-800 gr.
Males feature tricolor plumage with dark brown feathers, dark red coat, ash gray tail and wings.
The females and the young specimens are of a uniform brown color; the upper part of the female’s head is cream-colored like the edge of the junction of the wings. Characteristic is the collar of facial feathers that covers the very large openings of the ear, an adaptation useful for locating the preys even in the middle of tall grass thanks to the rustle they produce and the squeaks emitted.
This hawk is recognized in flight for its slow progress in which it performs long and low-altitude exploration flights over the fields with rare wing beats, keeping the wings spread well above the level of the back. Fly higher than other hawks, usually 35-50 meters above the ground.

Biology –
The Western marsh harrier reproduces in spring when it nests near the water.
During the courtship phase, the male performs spectacular acrobatics over the nest and the surrounding area. During the nesting period, the male goes hunting and when he brings back the prey he warns the female with a characteristic whistle. The female then reaches the male and in flight positions herself under him and turns, bringing her legs upwards. At that point the male leaves the prey which the female retrieves with her paws.
Before spawning, the female builds a large flat nest made of reeds and grasses, hidden in the dense vegetation of the reeds or in the dense vegetation in shallow water. Both parents add material to the nest while caring for the young.
The female lays from 2 to 5 eggs, greenish in color, in the period from March to May, which are incubated, one at a time, for 30-33 days.
For the first week the young are hatched by the female, who feeds them with her beak, but subsequently they feed alone in the nest even with a certain voracity.
When the chicks have grown up, the female helps the male in hunting and if the male is killed she can raise the brood by herself. After a month, the chicks scatter in the surrounding vegetation, and become covered with feathers after 35-40 days. The young fly off at 50 days.

Ecological Role –
The Western marsh harrier feeds on fish, frogs, lizards, insects, eggs and birds up to the size of a teal and small mammals, especially rats and voles.
The migration period in Western Europe begins in mid-August with young birds born during the year, followed by adults in September-October.
Males migrate later than females and juveniles and arrive later in wintering places and usually migrate alone or in small groups, not in large flocks, but when they land the hawks are more gregarious than usual, forming groups of up to 300 individuals. The birds arrive in their breeding areas from late March onwards, at the latest in early May in the northernmost areas of the range.
Southern migration from Europe follows a specific path, through Gibraltar and the Bosphorus, and rarely crosses large bodies of water. During migration they manage to fly at such heights as to be able to overcome mountain ranges, even if they usually prefer to fly at low altitudes. The northward migration begins in February and March and frequently crosses the Mediterranean.
In Italy it is a regular migrant and winter visitor, locally sedentary and its population is increasing. In 2005, 200-300 pairs were estimated, which is an increasing number compared to the 170-220 pairs in 2003.
The main threats to this hawk are related to illegal killings.
Conservation measures see this species listed in Annex I of the Birds Directive (79/409 / EEC). It is also a species subject to protection according to Article 2 of Law 157/92.