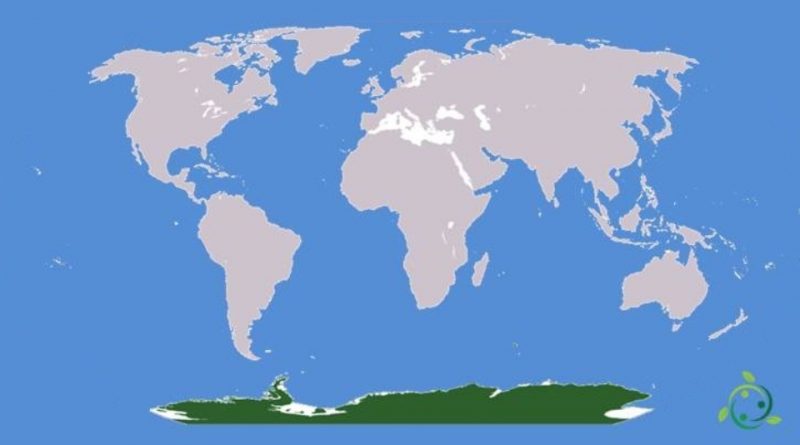 The Antarctic ecozone is one of the eight terrestrial ecozones with which the globe has been delimited.
The Antarctic ecozone is an ecosystem that includes the continent of Antarctica and some islands of the South Atlantic Ocean and the Indian Ocean and which extends over an area of ​​about 0.3 million km2.
Some island groups are also part of the Antarctic ecozone, including South Georgia and the South Sandwich Islands, South Orkney Islands, South Shetland Islands, Bouvet Island, Crozet Islands, Prince Edward Islands, Heard and McDonald Islands, Kerguelen Islands. These islands have a slightly milder climate than the Antarctic proper and allow the growth of tundra vegetation, even if they are too windy and cold to allow the growth of trees.
From a geological and climatic point of view millions of years ago Antarctica was warmer and more humid than today, and allowed the growth of an Antarctic flora that included podocarpus and southern beech forests.
In that geological era, Antarctica was then part of the supercontinent Gondwana, which began fracturing around 110 million years ago. The subsequent separation of South America from Antarctica, which occurred between 30 and 35 million years ago, led to the establishment of the Antarctic Circumpolar Current, which climatically isolated the continent and led it to become much colder.

Flora –
After the separation occurred between 30 and 35 million years ago, the Antarctic flora disappeared from these areas, while it is still present in the neotropical eco-zone of South America and in the Australasian eco-zone, whose territories were also part of Gondwana.
The continent of Antarctica is so cold that it has practically not allowed the growth of vascular plants for millions of years and its flora currently consists of about 250 species of lichens, a hundred mosses, 25-30 liverworts and 700 species of terrestrial and aquatic algae. , which live in exposed areas of rock and soil around the continental coasts. The only two species of Antarctic angiosperms, the herbaceous plant Deschampsia antarctica and Colobanthus quitensis, are found in the northern and western parts of the Antarctic Peninsula.
Furthermore, the ocean is very rich in phytoplankton because the water rises from the depths of the sea towards the illuminated surface, bringing the nutrients of the ocean back to the photic zone.

Fauna –
The krill (Euphausia superba Dana, 1850), commonly known as Antarctic krill, is one of the key species of these seas and represents a fundamental component of the diet of whales, seals, leopard seals, fur seals, crab-eating seals, squid, penguins, albatross and many other birds.
Krill is a crustacean of the Euphausiidae family, widespread in Antarctica and is a key species of the Antarctic ecosystem and, in terms of biomass, probably the most abundant animal species on the planet (approximately 500 million tons).
This crustacean lives in flocks that can reach a number of 10,000–30000 individuals per cubic meter.
Antarctic fauna also includes a vast diversity of animal life including penguins, pinnipeds and cetaceans.