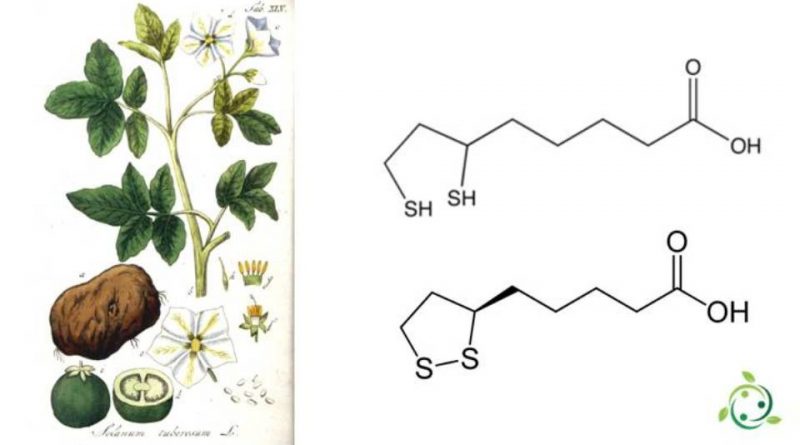 Lipoic acid or thioptic acid, also known as Vitamin N is an organic acid whose term in the IUPAC nomenclature is: (R) -5- (1,2-dithiolan-3-yl) pentanoic acid.
Lipoic acid was isolated for the first time in 1951 from liver extracts, by the two American biochemists L. J. Reed and I. C. Gunsalus who managed to obtain only a few mg starting from large quantities of liver.
Lipoic acid is a small amphipathic molecule made up of eight carbon atoms, two of oxygen in the carboxyl group and two of sulfur. In nature it exists in two forms, as a cyclic disulfide (oxidized form) or as an open chain with the name of dihydrolipoic acid, which shows two sulfhydryl groups in position 6 and 8. However, the two forms are easily interconvertible through redox reactions. Lipoic acid participates in various antioxidative mechanisms such as the reduction of glutathione (GSH) and ascorbic acid. Reduced vitamin C reactivates oxidized vitamin E (chromanoxyl radical), reducing it to tocopherol (active vitamin E).
Alpha lipoic acid can undergo both redox reactions and act as a carrier of electrons or acetyl groups. It is highly absorbable through the cell membrane, carrying out its antioxidant action inside and outside the cell.

Furthermore, from a biochemical point of view, lipoic acid is a cofactor of numerous enzymes that intervene in the oxidative decarboxylation of pyruvate and other ketoacids, being continuously regenerated. It also plays an important role in glucose control and in the prevention of diseases such as cataracts and stroke.
Furthermore, lipoic acid is a lipid nutrient with strong antioxidant power (it also supports the regeneration of Ascorbic Acid, or Vitamin C) and with a certain versatility since it has the characteristic of being both fat-soluble and water-soluble. Lipoic acid also improves the transport of glucose within cells, keeping in balance or restoring its correct values ​​in the blood, and facilitates the speed and functionality of nervous communication; finally, it helps in the case of cataracts, regenerating Glutathione, an antioxidant present in the ocular fluid.
Lipoic acid is contained in foods such as: red meat, liver, potatoes, vegetables (broccoli, lettuce, spinach).