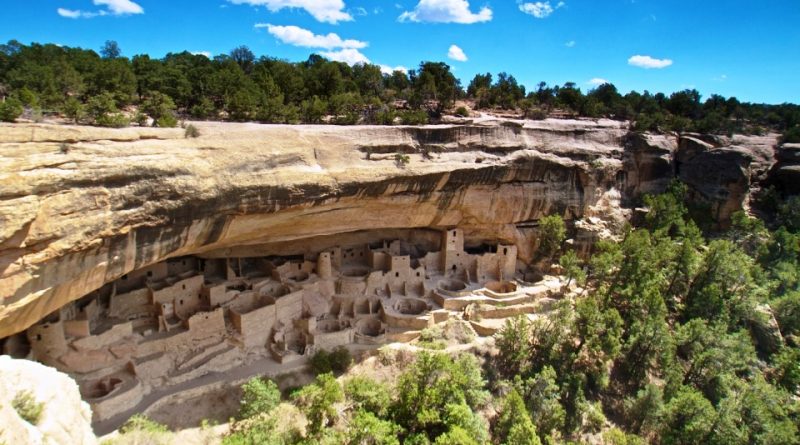 Mesa Verde National Park, whose WDPA Code is: 997 is a protected natural area located in the United States.
On 29 June 1906 in order to protect the settlements of the ancient Anasazi, the Mesa Verde National Park was established. This natural area, after Yellowstone, was the second US park to be established. Subsequently, since 1978, the Mesa Verde National Park has also been included in the list of UNESCO World Heritage Sites.
Mesa Verde National Park is located in the state of Colorado and precisely in Montezuma County, in the southwestern section of the state. The territory consists of a plateau with an altitude varying between 1860 m and 2560 m and is crossed by a series of rocky reliefs and valleys arranged longitudinally.
This park extends for 211 km2 and includes an area where there are the remains of numerous settlements built by the ancient Ancestral Peoples, once called Anasazi.
These settlements were built within recesses in the rock, called cliff-dwellings. The best known and largest of these settlements is the one called Cliff palace.
From a historical and archaeological point of view, although the oldest settlements in the Mesa Verde National Park date back to no more than 800 years ago, the region was inhabited by the Anasazi as early as the 6th century. These first inhabitants of which there is no evidence neither on the origin nor on the name by which they defined themselves, initially lived in pit houses forming small villages arranged over a rather large surface. Over the span of 500 years they honed their building skills and built large settlements with multi-level buildings built of mud and stone. This type of settlement is generally referred to as a pueblo. In these villages there are not only buildings for residential use and warehouses, but also community buildings for ceremonial use called kivas. From the beginning of the twelfth century, the Anasazi began to build their villages inside the recess of the rock, creating the settlements visible today in Mesa Verde.
It was in this era that the Anasazi reached their heyday. Although archaeological excavations have not yet provided such elements to reconstruct their history in detail, the numerous finds allow us to have a fairly clear idea of ​​their lifestyle and culture.
The Anasazi achieved considerable skill in making terracotta artifacts, such as vessels, bowls and other objects probably with ritual functions, as well as baskets and other objects obtained by weaving vegetable fibers. It is believed that these crafts were mainly practiced by women, who handed down the technical knowledge from mother to daughter. The terracotta objects were decorated with geometric motifs. The Anasazi practiced agriculture, mainly growing corn and legumes.
It still remains a mystery what are the reasons that led the Anasazi to abandon these settlements and these territories.
Among the possible hypotheses are the climatic changes that would have caused a scarcity of resources such as to prevent survival in those places, or the occurrence of strong social tensions.
After being left by their original inhabitants, the villages built in the rock fell into a state of neglect and were rediscovered only in the sixteenth century by Navajo populations, to whom we also owe the name Anasazi, which indicates the populations that had previously inhabited the region.
There are about 600 cliff dwellings in the Mesa Verde National Park. Most of them are very small settlements. There are barely a dozen of the largest, including the most famous, including Spruce Tree House, Balcony House and Cliff Palace.
These include:
– Cliff Palace is the largest rock-built settlement in North America. It is located in a recess 27 m deep and 18 high and consists of 220 rooms (including 23 kivas), of which only about thirty retain traces of a hearth. This suggests that the houses were made up of several rooms connected to each other and that some of them were used as warehouses;
– Long House is the second largest settlement in Mesa Verde. It is located on Wetherill Mesa in the western sector of the park;
– Spruce Tree House, is certainly the settlement that is in the best state of conservation and is the third largest village in Mesa Verde. It consists of 130 rooms and 8 kivas. It is believed that it may have been inhabited by about 80 people;
– Balcony House, was discovered in 1881. To visit the settlement it is necessary to go down inside the canyon for 30 meters and then go up to the buildings built in the cavity of the rock by means of a 10 m ladder;
– Square Tower House, the tower that gives the settlement its name is the tallest building in Mesa Verde. It was occupied between 1200 and 1300 AD;
– Mug House, is located on Wetherill Mesa and was excavated and studied in the 1960s by archaeologist Arthur Rohn. It consists of 94 rooms on four levels and includes a large kiva. 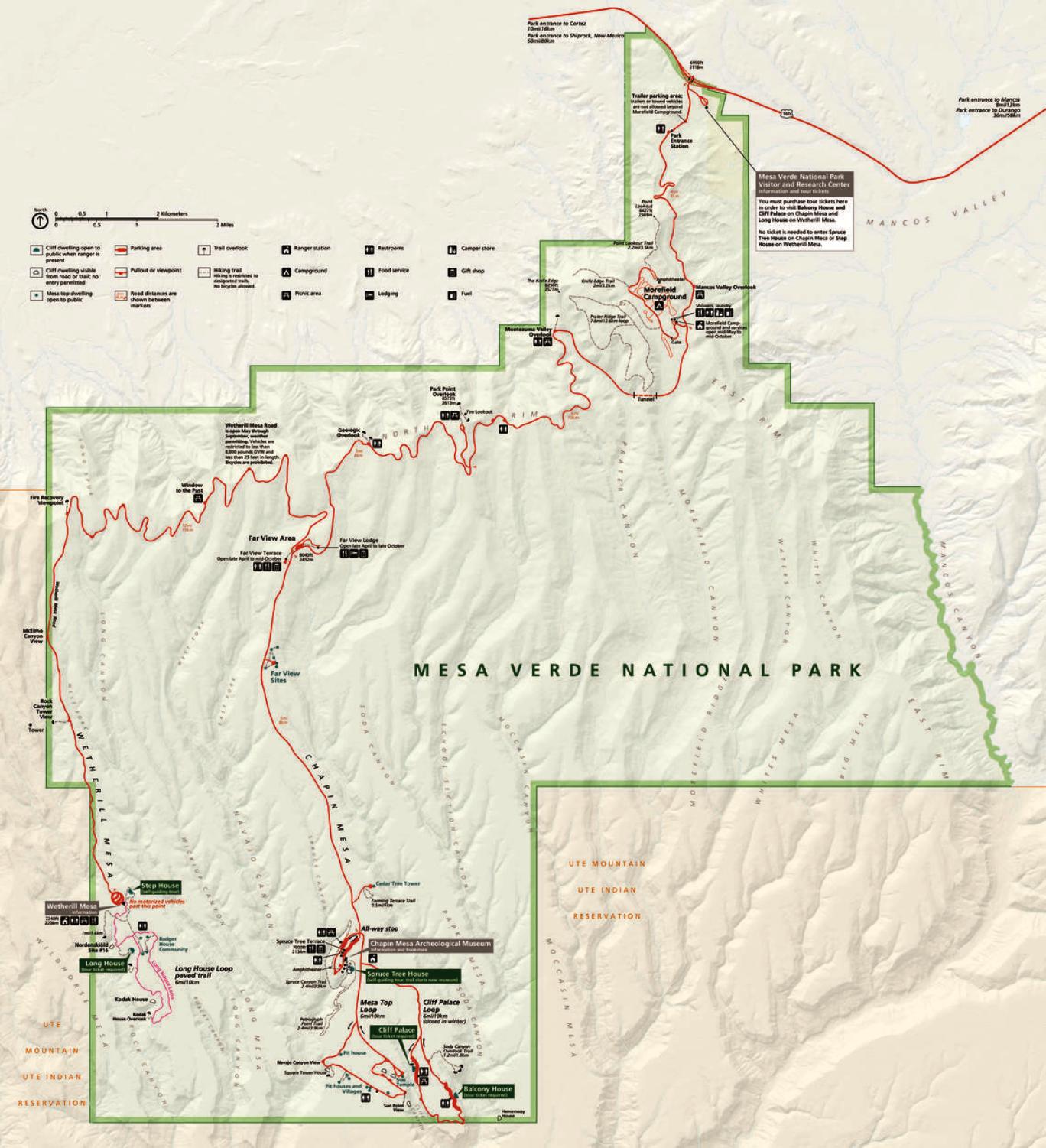 Flora –
The Mesa Verde National Park is characterized by a territory furrowed by deep canyons, high altitude and an arid climate. These factors shape the plant species that grow in the park. Pinyon juniper woodlands, mixed herb grasslands, and mountain shrubs are the largest plant communities in Mesa Verde that support much of the park’s flora.
Over 640 plant species are found in Mesa Verde National Park. These include approximately 556 species of vascular plants, 75 species of fungi, 21 species of moss and 151 species of lichen. In addition, there are many rare endemic species in Mesa Verde that are not found anywhere else. There are also about 80 species of allochthonous plants that have invaded the park, some of which have been classified as invasive and harmful weeds that, by law, must be controlled.

Fauna –
Mesa Verde National Park contains several habitats that support a great diversity of resident and migratory wildlife. The park was named Colorado Important Bird Area (IBA) by the Audubon Society and has two protected activity centers and three central breeding areas for the threatened Mexican spotted owl, totaling 5,312 acres. The Colorado Natural Heritage Program and The Nature Conservancy have classified all of Mesa Verde National Park within their Network of Conservation Areas (NCAs) due to exceptional cases of rare animal and plant species.
The geographic isolation of the park and its location in a geographical transition area help provide niches for this wide variety of animal species. Currently, some 74 mammal species, 200 bird species, 16 reptile species, five amphibian species, six fish species (four of which are indigenous) and over 1,000 insect and other invertebrate species spend at least part of the year within the boundaries of the park. Some animal species, such as native fish and amphibians, are confined to rather narrow eco niches in a single biotic community. Others, such as coyotes, deer, and other large mammals, are found in a wide range of habitats.
Ecological relationships, such as with the rare black swallowtail butterfly, whose larvae feed on one of the park’s rare endemic plants, the Mesa Verde Wandering Aletes, are found in the park. If the plant disappears, the butterfly may also disappear. Some insects found at Mesa Verde and Yucca House in recent years are completely new to Colorado and science or Colorado, such as the Mesa Verde tiger beetle and the Anasazi burrowing bee.