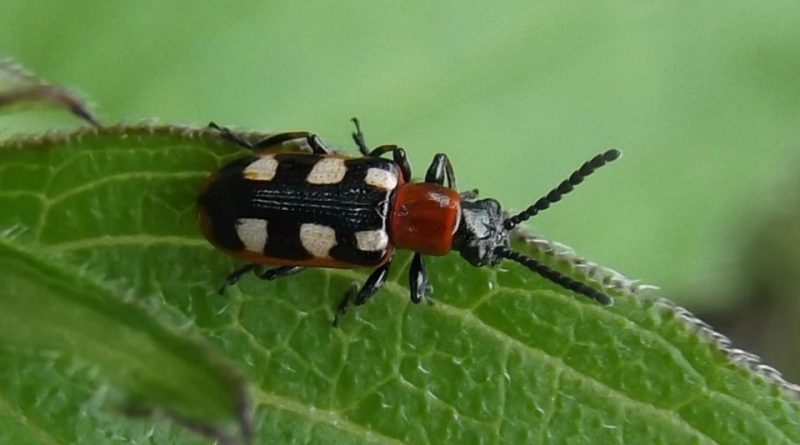 The common asparagus beetle (Crioceris asparagi Linneo, 1758) is a beetle belonging to the Chrysomelidae family.

Geographic Distribution and Habitat –
Crioceris asparagus is a phytophagous beetle that attacks asparagus, which can also cause extensive damage and even ornamental and spontaneous species.
The insect is present both in Europe and in America and in other areas where asparagus is grown.

Morphology –
The common asparagus beetle is a small beetle in which adults measure 6 mm. these have a bright blue head, black antennae, a red pronotum, decorated with 2 small black spots. The elytra are bright blue, edged in red with 2 marginal rows of 3 white spots. The legs are black.
The eggs are 2 mm long, dark greenish gray in color, fixed by one of the poles perpendicular to the branches.
The larvae measure 7 – 10 mm, have a slightly curved gray – greenish yellow body, with black head and legs; they also have small black points on the abdominal segments.

Attitude and Life Cycle –
The common asparagus beetle overwinters as an adult in shelters, among plant residues or in the ground. Arrived in the spring this beetle moves on the vegetation to feed; at the end of May, after the mating period, the females lay eggs on the aerial part of the plants.
The larvae, when ripe, pupate in the ground; new adults appear in the period of July. These adults originate a second generation that always feeds on the epigeal part of the Asparagus; the adults of this generation flicker towards the month of September and are destined to overwinter.
The Criocera therefore completes two generations a year.
The adults who have wintered go, in spring, to the “shoots” on which they feed; subsequently, together with the larvae, they carry on the cladodes and stems which are eroded.

Ecological Role –
The common asparagus beetle, both in the larval and adult stages, feeds to the detriment of the asparagus, as well as the shoots, cladodes and stem, causing a trophic action.
The main damages are due to the larvae that gnaw and destroy all the green branches of the shoots, considerably or totally reducing all the possibilities of assimilation of chlorophyll photosynthesis.
The phytophagus also attacks ornamental and spontaneous species.
The fight against the asparagus Crioceris, up to now, has been a chemical one. In the evolution of techniques with a lower environmental impact, it is also recommended to decrease the specialization of the plants, the fragmentation of the plots, the interposition of hedges where useful insects can live.
In fact, it is recalled that this species is parasitized by some Chalcidoid Hymenoptera.
Among the beneficial insects it should be remembered that the parasitic wasp, Tetrastichus coeruleus, present mainly in the United States and Europe, can cause up to 71% of mortality in the field and has been successfully used for biological control.
Furthermore, if the fight becomes necessary, it is advisable to intervene with insecticides of natural origin such as natural pyrethrum or spinosad.
The chemical fight must be carried out:
– in spring, against wintering adults;
– in the summer, against subsequent generations.