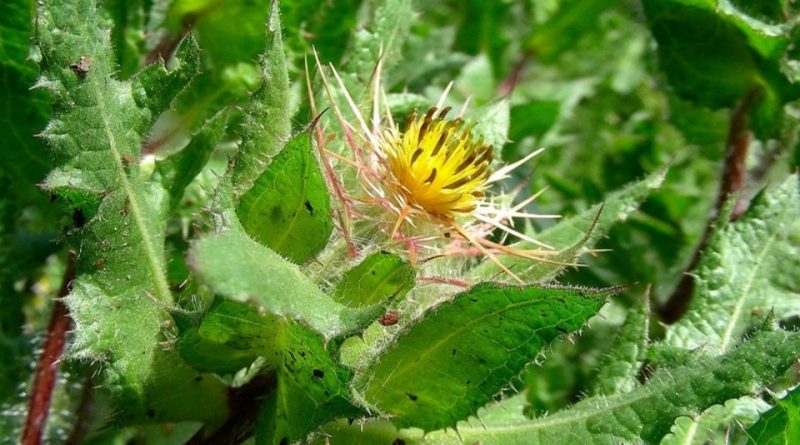 Etymology –
The term Centaurea is assonant with the Greek κέντρον céntron goad, spur: due to the shape of the bud, or from Centaurus, Greek κένταυρος céntauros centaur, mythological figure half man and half horse; according to some authors, this genre would be dedicated to Chiron who, unlike the other centaurs, had a wise and meek disposition: an expert in science and medicine, he was considered a teacher of Aesculapius, Achilles and other heroes.
The specific epithet benedicta is the participle of benedico benedire: blessed, probable reference to possible therapeutic properties.

Geographic Distribution and Habitat –
The St. Benedict’s thistle is a plant native to the countries of the Mediterranean basin; common in Italy especially in the plains, in particular in the Tyrrhenian areas.
Its habitat is that of uncultivated or deep, loose and fertile soils, where it is also found among ruins and in resting fields, from 0 to 800 m. 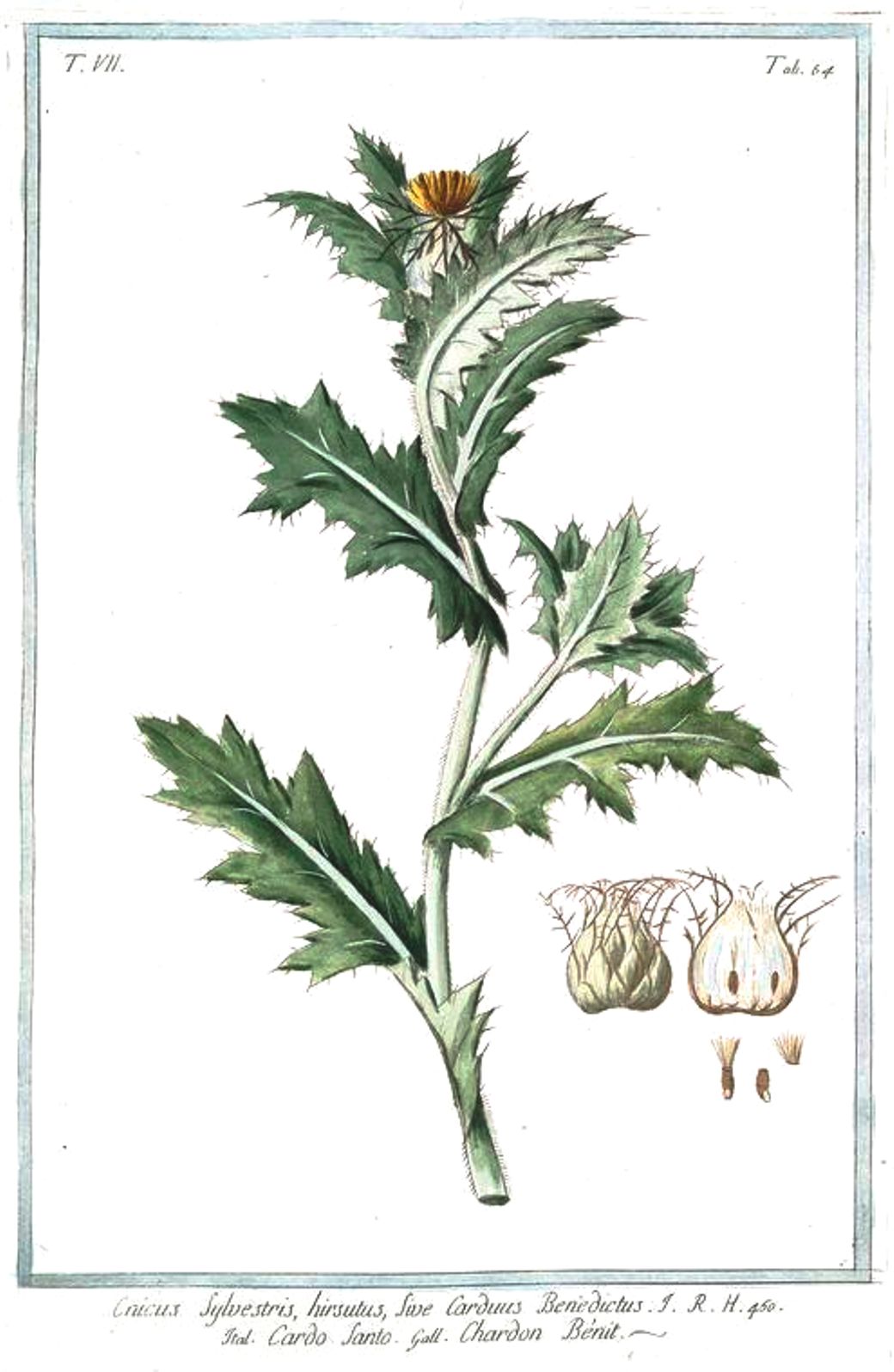 Description –
Centaurea benedicta is an annual herbaceous plant with a white tap root, with a height of 20-60 cm.
The stem is hairy-fluffy, reddish-purple in color, erect, spread-branchy, leafy up to the apex.
The leaves are pale green, glandular-woolly, alternate, sinuous-pinnatifid, with a white ribbed rachis, the basal ones briefly petiolate, up to 30 cm long, those of the caule semi-embracing or briefly flowing on the stem, all with triangular toothed segments. spinulosis.
The inflorescences are gathered in solitary flower heads, about 2-3 cm in diameter, located at the apex of the stems, surrounded by a set of large leafy bracts, inserted under the flower head itself.
The globose-cobweb envelope has a series of variable scales, acute ovate, red-yellowish, dentate-spiny, ending in a long pinnate thorny appendage.
The corolla is yellow with purplish or greenish veins, it is formed by all tubular flowers, the exteriors sterile, the insides hermaphrodites.
The antesis is in the period of May – June.
The fruits are cylindrical achenes, slightly curved, 8-11 mm long, provided with about 20 longitudinal ribs, surmounted by a pappus composed of a membranous crown and 2 series of hairs: the inner ones by short bristles, the middle ones by rigid bristles .

Cultivation –
The St. Benedict’s thistle was once also cultivated, with sowing in April in rows with a sixth of 60–70 cm x 30 cm. The plants were cut at the beginning of flowering in summer, with the possibility of a second mowing in autumn.
It is a plant that adapts well to deep, loose and fertile soils.

Customs and Traditions –
The St. Benedict’s thistle is used in cases of inappetence, to promote digestive processes, stimulating the intestine and the gallbladder, to increase diuresis and purify the body. Due to its bitter-tonic and flavoring properties, it is used in the preparation of wermouth and digestive bitters.
One of the active ingredients, cnicin, has antibiotic and anti-inflammatory properties.
In addition to cnicina it contains ethereal oil, sugars, mucilages, tannin, resinous and rubbery substances, leaves abundant ashes with the presence of potassium, calcium and magnesium salts.
The use is contraindicated for subjects suffering from gastric hyperacidity and allergic to asteraceae, high doses can cause vomiting and diarrhea, following irritation of the gastric mucosa.
A legend has it that this herb was introduced from the Indies in the mid-1400s and donated to Emperor Fedric III, who recovered from his migraine, who as a result of these beneficial effects named it blessed.
It was also very much in vogue in the 16th century, Shakespeare extolled it as an excellent remedy for palpitations.

Preparation Method –
Centaurea benedicta is used in phytotherapy; the whole dried plant is used, removing the larger parts and the stem, and flowered: it has bitter, tonic, stimulating, emagogic, diuretic, diaphoreticic properties, overdose, as mentioned, causes tracheo-esophageal burns, vomiting and accompanying colic from diarrhea. It is not recommended for those suffering from hyperchlorhydria or kidney damage.
It is also used in liquor shops as well.