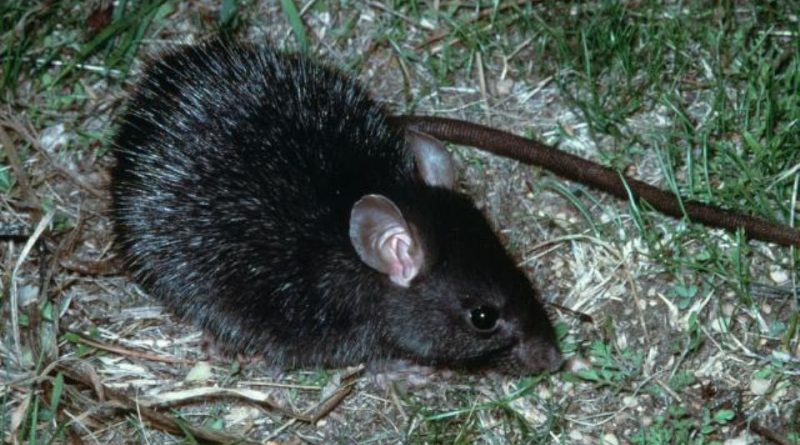 The black rat or common rat (Rattus rattus Linnaeus, 1758) is a rodent belonging to the Muridae family.

Systematics –
From the systematic point of view it belongs to the Eukaryota Domain, Animalia Kingdom, Eumetazoa Subarign, Bilateria Branch, Superphylum Deuterostomia, Phylum Chordata, Subphylum Vertebrata, Infraphylum Gnathostomata, Superclass Tetrapoda, Class Mammalia, Subclass Theria, Infraclasse Order Eutheria, Suborder Eutheria Myomorpha, Superfamily Muroidea, Family Muridae, Subfamily Murinae and then to the Genus Rattus and to the R. rattus Species
Following a taxonomic revision, the following subspecies are recognized within this species:
– Rattus rattus alexandrinus, brown dorsally and gray on the belly;
– Rattus rattus frugivorus, brown color on the back and white or cream color in the lower parts;
– Rattus rattus rattus, completely black on the back, black or dark gray on the ventral regions.

Geographic Distribution and Habitat –
The black rat is a species of Asian origin, probably from the Indian Peninsula, and has now become cosmopolitan. It is in fact widespread in temperate and tropical areas all over the world and therefore also throughout the Italian territory including the islands, with the exception of areas at high altitudes, where it is located only in close proximity to human settlements.
In Italy, the nominal subspecies is widespread throughout the territory, including major and minor islands: its density is greater in coastal areas, while it tends to rarefy as one proceeds inland, up to an altitude of 250 m, while for greater heights its presence is linked to the presence of human settlements.
This species spread in the wake of Arab traders in much of Asia, and later reached Europe with ships returning from the Holy Land during the Crusades: from here, following the sea voyages of European merchants and settlers, gradually spread throughout the world.
It is believed that the arrival of the black rat in Europe preceded that of the gray rat by six centuries: it coincided with the outbreak of the bubonic plague that devastated the continent, caused by bacteria carried by fleas belonging to the species Xenopsylla cheopis, which thrives in the fur of these animals.
Subsequently, the gray rat, more aggressive and adaptable, over time replaced the black rat in most of the temperate and cold areas of its range, while in tropical areas (as well as in New Zealand) it is the black rat that has the upper hand in the competition. .
In fact, from the surveys carried out it seems that the black rat also bears both warmer and colder climates than the gray rat, thriving in subtropical and tropical environments, where it reproduces at much higher rates than normal.
The Rattus rattus, in fact, unlike the congener, prefers drier areas: although it is often found in areas close to water, such as coastal areas, ports and ships (even if currently the strict rules of rodent control have made it rather rare presence in boats, while in the past it was so common as to give it the name “rat of the ships”), it is very rare that it ventures into the water. 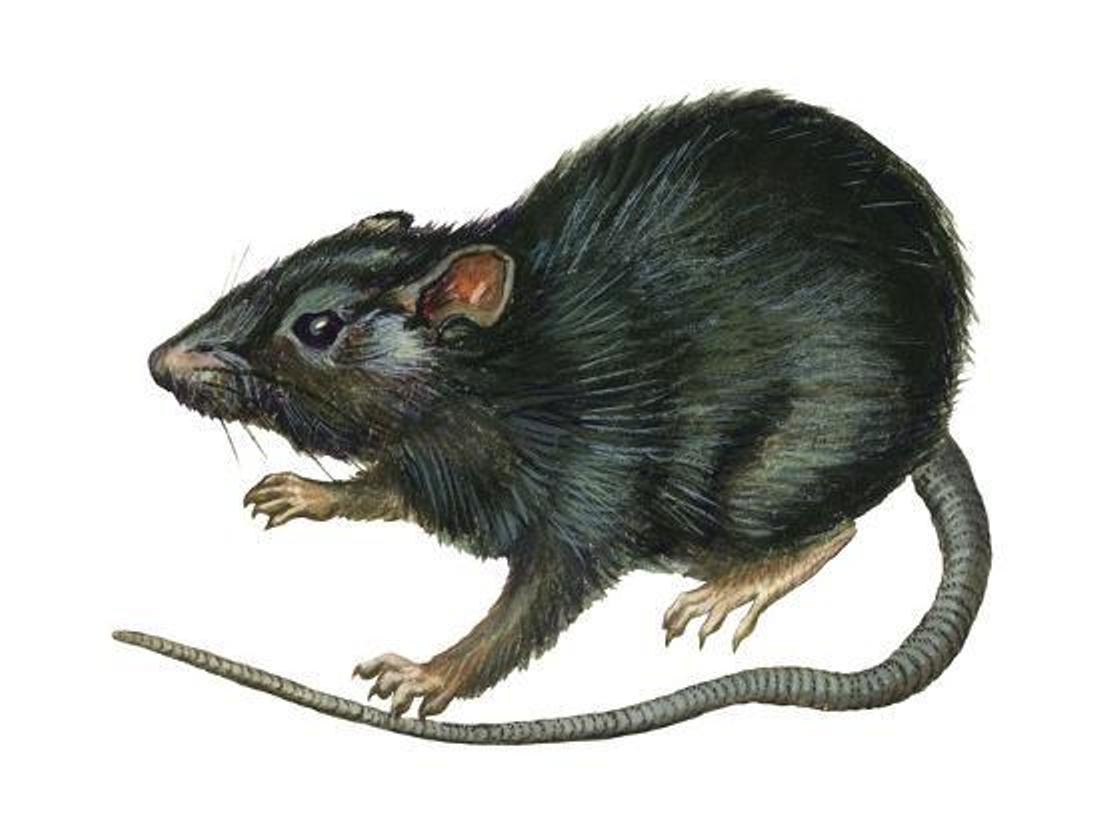 Description –
The Rattus rattus has a head-body length of 16-24 cm, a tail length of 18-26 cm, for a weight of 150-250 (300) grams.
Males are generally larger and more robust than females.
It is recognized for its square and robust body.
The hind legs are longer and stronger than the front ones: the lower part of the front thumbs have rings in the shape of scales, while the big toes of the hind legs are reduced to simple tubercles. On each leg there are five pads corresponding to the toes in the plantar region.
The hair has a dark color, tending to black but with the characteristic of lightening in the ventral area, with variations in local populations.
The tarsus and the real paw are hairless and flesh-colored-black, while the tail, covered with sparse hair, is scaly and of the same color as the paws.
The snout, on which there are long and sensitive whiskers, has a pointed shape and is hairless and pink in color like the ears which are of medium size.
The eyes are black.
The verses are squeaking and hissing and he has excellent hearing and smell.

Biology –
The black rat can reproduce at various times throughout the year, with peaks in the summer and reaches sexual maturity from 3 to 5 months.
Females give birth to up to five litters a year if weather conditions permit.
The gestation time lasts just under a month, at the end of which a number of puppies varying between 5 and 12 are given birth.
When the female comes close to giving birth, she begins to stuff the nest with a large amount of soft material, such as dry leaves and moss, but also paper and plastic.
The puppies that are born are hairless, blind and deaf; these do not open their eyes before two weeks of age and are weaned around the month.
The independence of the cubs occurs just after weaning, even if they do not leave the nest before reaching adult size.
The Rattus rattus lives more than a year in the wild, while in captivity it reaches four years of life.

Ecological Role –
The black rat is a purely herbivorous rodent: it feeds mainly on cereals, fruit and grains, preying on silos in rural and port areas and causing even considerable damage, as it contaminates the food with urine and excrement, thus making it a vehicle for numerous diseases such as leptospirosis.
If necessary, it can also feed on insects or other invertebrates, eating anything it can digest if necessary. Additionally, a medium-sized black rat consumes 15 g of food and 15 ml of water per day.
From the ecological point of view, the Rattus rattus lives in mixed groups including numerous specimens of both sexes.
Furthermore, among males, there is a rigid hierarchy, which translates into greater or lesser access to food or females: the latter are more aggressive than males and tend to move less within the territory that each group defines and which typically measures about a hundred square meters.
A certain hierarchy is also present among the females and in particular there are always two or three of them that are dominant with respect to all the others belonging to the group, with the exception of the dominant male.
From the point of view of territorial control, however, these rodents take little care of their own territory, aggressively defending strategic areas such as food supplies from intruders. in this regard, black rats secrete a particular oily substance which is used both in communication with other specimens within the same group, and as a deterrent for intruders, as this is often used to mark the borders of the territory.
These rodents are active at all hours, but have peaks of activity mainly after sunset: during the day, black rats tend to rest in voluminous and globular nests, built with grass stems and leaves, generally located high up , for example among the branches of a tree or on the upper floors of a building (in particular in the attics, hence the common name of “rat of the roofs”): only rarely do black rats dig underground burrows. To move at great heights, the black rat uses its long tail as a counterweight during its movements, to maintain balance and avoid falling. In the Trobriand Islands, however, black rats use their tails as a bait to catch small crabs.
These animals are expert climbers, so much so that they are often found on the upper floors of buildings (hence the common name of “roof rat”) or on the tops of trees.
Rattus rattus is included in the list of 100 of the most harmful invasive species in the world.