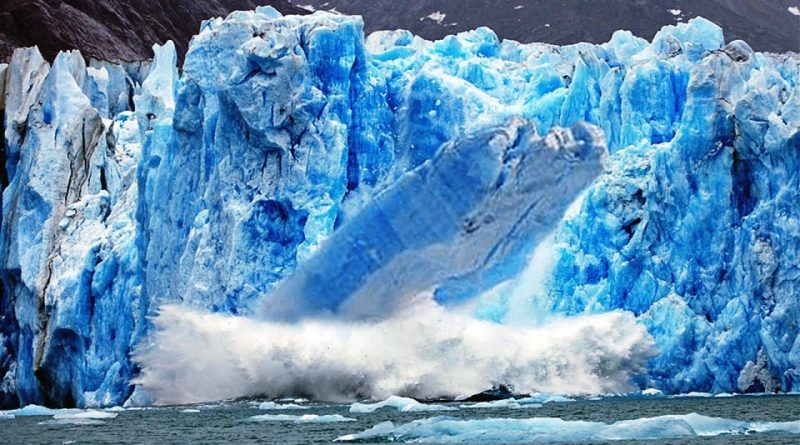 The Wheat that is destroying the glaciers

Wheat, as is well known, is not only one of the most consumed foods on the planet but also the symbol of the birth of agriculture.
Wheat was, in fact, among the first plants to be cultivated. As is well known, the center of its domestication has been identified by archaeologists in different locations of the large area that reaches the coast of Palestine from the Iranian reliefs and the mountains of Anatolia, including the Tigris and Euphrates valleys, an area which its shape has been called the Fertile Crescent.
This symbol of the history of entire peoples and of incredible civilizations is now becoming the symbol of an incredibly contradictory civilization and unable to solve problems, now on a global level.
Modern civilization, blinded by the god of profit, is no longer able to overcome contradictions so evident that they appear simple even to a child.
The laws of the market have become like dictators that dominate reasons of state but also human reasons, creating the conditions for what could become the greatest change and therefore climate catastrophe from the Pleistocene to today.
Climate change is affecting the immense Antarctic and, above all, Arctic glaciers, resulting in the weakening of that permafrost which contains enormous quantities of greenhouse gases.
If the melting of the ice continues at the current rate – much faster, moreover, than the climate models had predicted – this phenomenon would in a few years release into the atmosphere a rate of emissions equal to that of the first world polluter: China, a eventuality that we cannot afford.
Much of global warming today is due to human activities, such as industry, agriculture and services but also to a transport system that is beyond any energy and thermodynamic logic.
Cars, vans, trucks and buses produce more than 70% of the greenhouse gas emissions generated by transport. The remainder comes mainly from sea and air transport.
Furthermore, transport also continues to be a significant source of air pollution, especially in cities.
Thus, since the beginning of the industrial revolution, the earth’s temperature has risen by more than one degree. With the Paris Agreement, the 190 signatory countries have set themselves the goal of limiting the increase to below two degrees, and if possible by one and a half degrees. The Treaty of Paris, without specific commitments, however, struggles to produce measurable effects. The most recent studies on emissions trends confirm this. But even if it were applied, it would not be enough to stop the catastrophe if we do not change the rules that dominate the laws of the market.
In the agricultural sector, to enter a specific area, we are even at the paradox.
Huge quantities of goods cross the planet without a real nutritional need but to satisfy market conditions, often artfully created, to favor an exporter to the detriment of an importer.
This is the case with Canadian wheat exported to Italy. This food, beyond the question of the content of glyphosate, mycotoxins and other biocides, which should not even see it classified as suitable for animal feed, and about which so much is written and debated, carries with it an equally serious load.
In order to be conveyed and transported (as well as produced), through the main Canadian ports, the wheat can travel distances that can oscillate on an average ranging from 7,000 to 10,000 km.
With this distance, making more or less complex calculations, for every kg of wheat, over 6 kg of oil is burned with an emission of about 18 kg of CO2.

An immensity which, in spite of the Kyoto Protocol and the recent Paris Agreements, finds no justification (except that of some speculators) and which, according to other somewhat more complex stoichiometric calculations, affects much more (for its share part) to the famous two degrees of the Paris Agreement.
In fact, to return to the concept established by these Agreements, James Hansen, a famous American climatologist for a long time at NASA, defines the scenario of the two degrees as a “recipe for disaster” in the long term. To understand what we are talking about, an increase of less than two degrees means the total destruction of the coral reef – half died this year – the sea level rising by a few meters and the abandonment of the Persian Gulf.
But worse still, for Robert Watson, former director of the United Nations Intergovernmental Panel on Climate Change, the most plausible scenario is a three-degree rise. At this temperature we will have forests at the Arctic Circle and most of the coastal cities will disappear. With an increase of four degrees, Europe is left without water while vast areas of China, India and Bangladesh are invaded by the desert. Polynesia is engulfed by the ocean and much of the southern United States becomes uninhabitable. Five degrees endanger the very survival of the human species. The recipe for long-term disaster, those two degrees evoked in Paris, has now become our best chance of survival.
Ironically (but whoever does it expects it and this, humanly, does not console us at all) the devastating effects of this phenomenon will hit above all Canada which will be forced to pay a very high price with the ongoing melting of the Hubbard Glacier, a glacier located in Alaska (United States) and partly in the Yukon Territory (Canada), where the glacier front is constantly moving and in May 1986 blocked the exit to the sea of ​​the “Russell Fjord” (south -east of the glacier front) forming the “Russell” lake whose level, during the summer, rose by 25 meters. In October, however, the ice dam gave way and about 5.3 cubic kilometers of water spilled into the sea within 24 hours.
Same thing is happening to other glaciers without any government having the courage to raise their voice against the havoc of a free market without rules that will drag horse and rider with it.
If for a moment we return to our small country, that is Italy, within a European Union in the presence of which a mole looks like an eagle with a profound view.
It is not clear (obviously beyond the predominance of large interests) how it is possible that this destruction is not stopped.
We continue to talk (and with good reason) about the health issue of wheat from Canada (but the problem is much wider and Canada risks becoming the scapegoat of a much wider canvas) without realizing that the issue is much more serious and, continuing in this way, the debate will not only involve humanity and animals but the fever of a Planet that rises more and more every day due to the indolence of a policy that has lost, too often, the power of the Agenda , and the ethical sense of the rules.
If certain rules on infringements are not combined with the Paris Agreements, let us no longer expect so much from history, because in this way with the Planet we are burning the future of humanity.
We need a strong cry, a concrete stance, even at the risk (and it would be time) of questioning the principles on which the policies of large states such as the United States, the European Union or China are based, to quote the more in sight.
We expect a policy that leads the economy back to ecology; we expect Voices of cries in the desert of a current Politics so short-sighted to tackle, and often clumsily, the questions on the effects but unable to reason about the causes.
Let’s go beyond appearances, let’s move towards the heart of the matter. The case of wheat that continually lands in our ports is only the tip of the iceberg and goes far beyond those health aspects on which the European regulations themselves, and the system of controls, are showing all their fragility.
We provide new visions to the Policy to cover it with a renewed dignity.