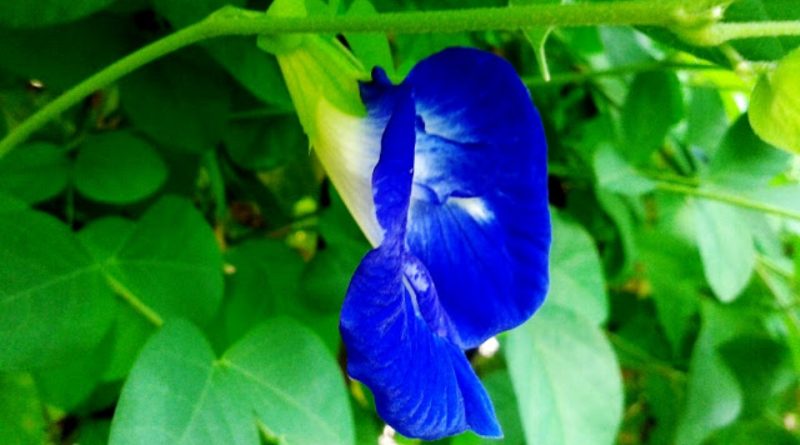 Etymology –
The term Clitoria comes from the Greek κλιτορίς clitorís clitoris: for the shape of the flower.
The specific epithet ternatea as the species is probably native to the island of Ternate, but generally referred to in protologues of the Indies and currently widespread in all tropical countries.

Geographic Distribution and Habitat –
Clitoria ternatea is a plant native to equatorial Asia, including locations in South Asia and Southeast Asia, but has also been introduced in Africa, Australia and the Americas. 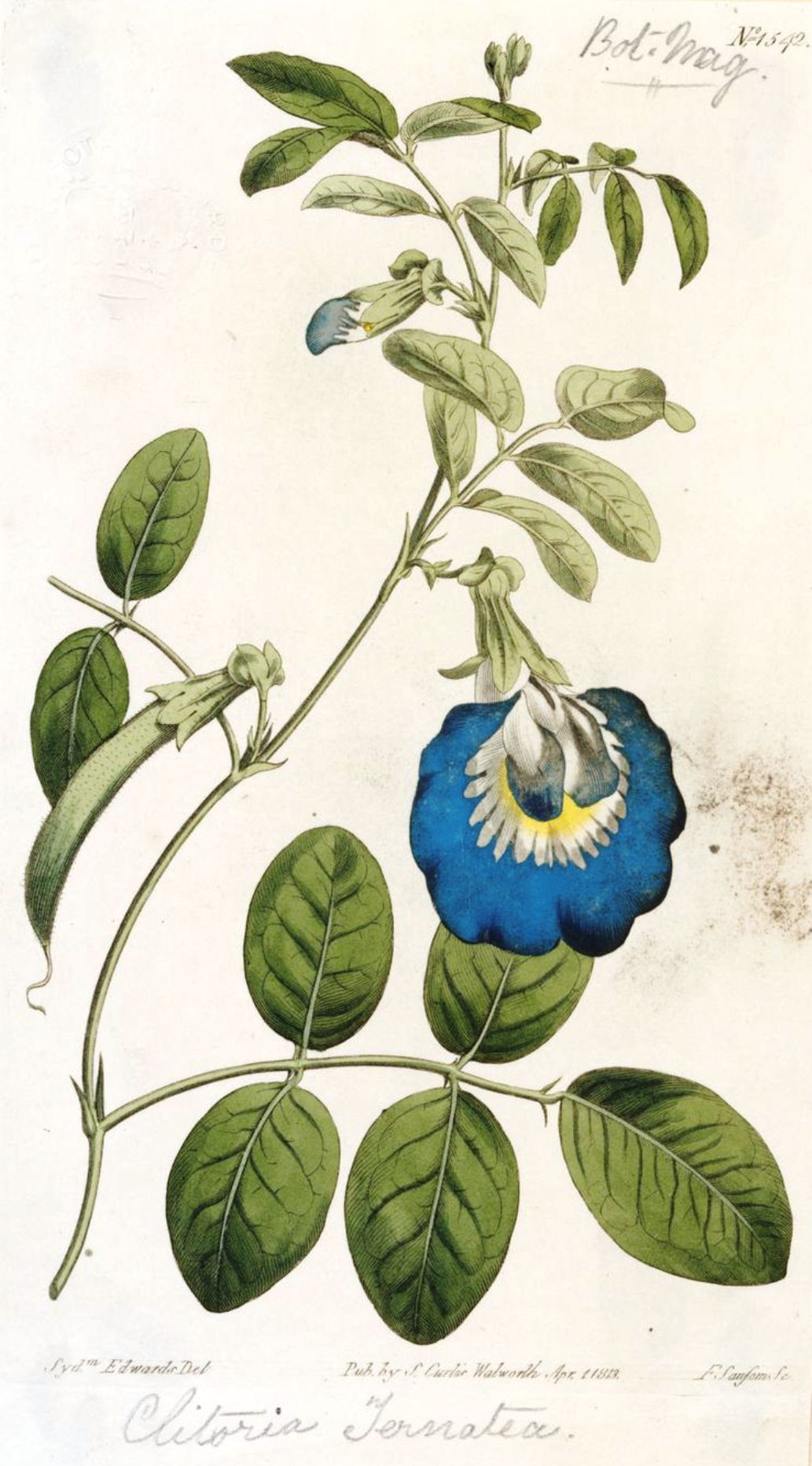 Description –
Clitoria ternatea is a perennial herbaceous plant that grows like a vine or a climber especially in solid and neutral soils.
The leaves are elliptical and obtuse.
The flowers are of a very intense and vivid blue color, carried in a solitary manner, with light yellow spots; they are about 4 cm long and 3 cm wide. Some varieties also produce white flowers.
The fruits are 5–7 cm long flat pods containing six to ten seeds for each pod. They are edible when they are tender.

Cultivation –
Clitoria ternatea is grown as an ornamental plant and as a revegetation species (for example, in coal mines in Australia), requiring little care when grown.
Being a legume, its roots form a symbiotic association with the bacteria of the genus Rhizobium that transform the atmospheric N2 into a usable form by the plant, therefore, this plant is also used to improve the quality of the soil through the decomposition of plant material rich in nitrogen.
Sowing can take place in the period of April – June and requires exposure in full sun or even partial shade and possibly in rich and well-drained soils.

Customs and Traditions –
Clitoria ternatea is a plant that in India is revered as a sacred flower, used in daily puja rituals. The flowers of this vine have been compared to the shape of the human female genitalia, hence the Latin name of the genus Clitoria.
In Southeast Asia, the flower is used as a natural food dye to color glutinous rice. In Kelantan, in northeastern Peninsular Malaysia, it is an important ingredient of nasi kerabu, giving it its distinctive bluish color. In Burmese and Thai cuisine, flowers are also dipped in batter and fried.
From this plant, a tea from dried flowers is obtained and changes color depending on what is added to the liquid, with the lemon juice turning it purple. In Thailand and Vietnam, this flower tea is commonly mixed with honey and lemon to increase acidity and turn the drink into a pink-purple color, to be made for a drink usually served after dinner or as a refreshment in hotels and spas. It is a typical local drink such as chamomile in other parts of the world. Tea is found in both hot and cold varieties.
More recently the flowers are used in a color changing gin. Bottled blue that turns pink when mixed with a carbonated mixer such as tonic water due to the change in pH. Since organic colors are not permanent, it is recommended to store this type of gin in a dark place to maintain the effect.
In traditional Ayurvedic medicine, various qualities are attributed to this plant including memory-enhancing, nootropic, anti-stress, anxiolytic, antidepressant, anticonvulsant, tranquilizing and sedative properties.
In traditional Chinese medicine, the plant has been attributed properties that affect female libido due to its appearance similar to the female reproductive organ.
The chemical compounds isolated from Clitoria ternatea include various triterpenoids, flavonols, glycosides, anthocyanins and steroids. Cyclic peptides, known as cliotides, were isolated from the thermostable fraction of the C. ternatea extract. In addition, the blue color of C. ternatea is the result of various anthocyanins, especially ternatins, polyacylated derivatives of 3,3 ‘, 5’-triglucoside delphinidin (Da-T).

Preparation Method –
The flowers of this plant are used both for making drinks and for medicinal purposes.
From these drinks similar to tea or even as a base for some gins are prepared.