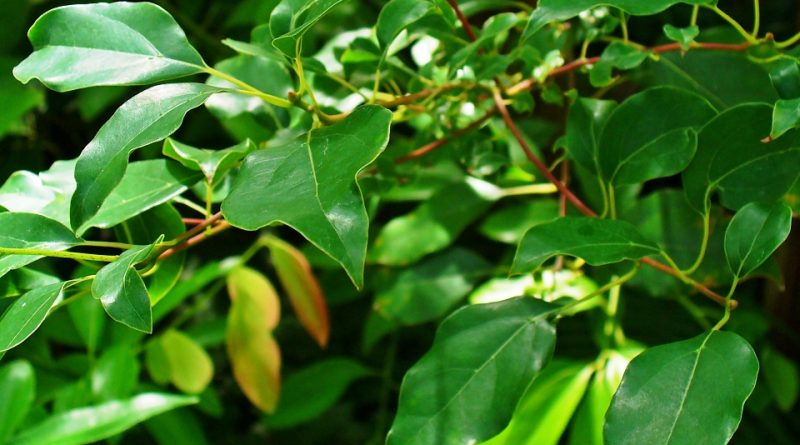 Etymology –
The term Cinnamomum comes from the Greek κιννᾰμωμον cinnámomon cinnamon, cinnamomo.
The specific epithet camphora comes from the medieval Latin camphora, in turn derived from the Arabic al-kafúr and in Sanskrit karpúra: camphor.

Geographic Distribution and Habitat –
The Camphor tree is a plant native to China, in the area south of the Yangtze River, Taiwan, southern Japan, Korea and Vietnam and was subsequently introduced in many other countries where, especially in Australia and the United States has become an invasive species.
In Italy it is present in the Mediterranean area only if cultivated. 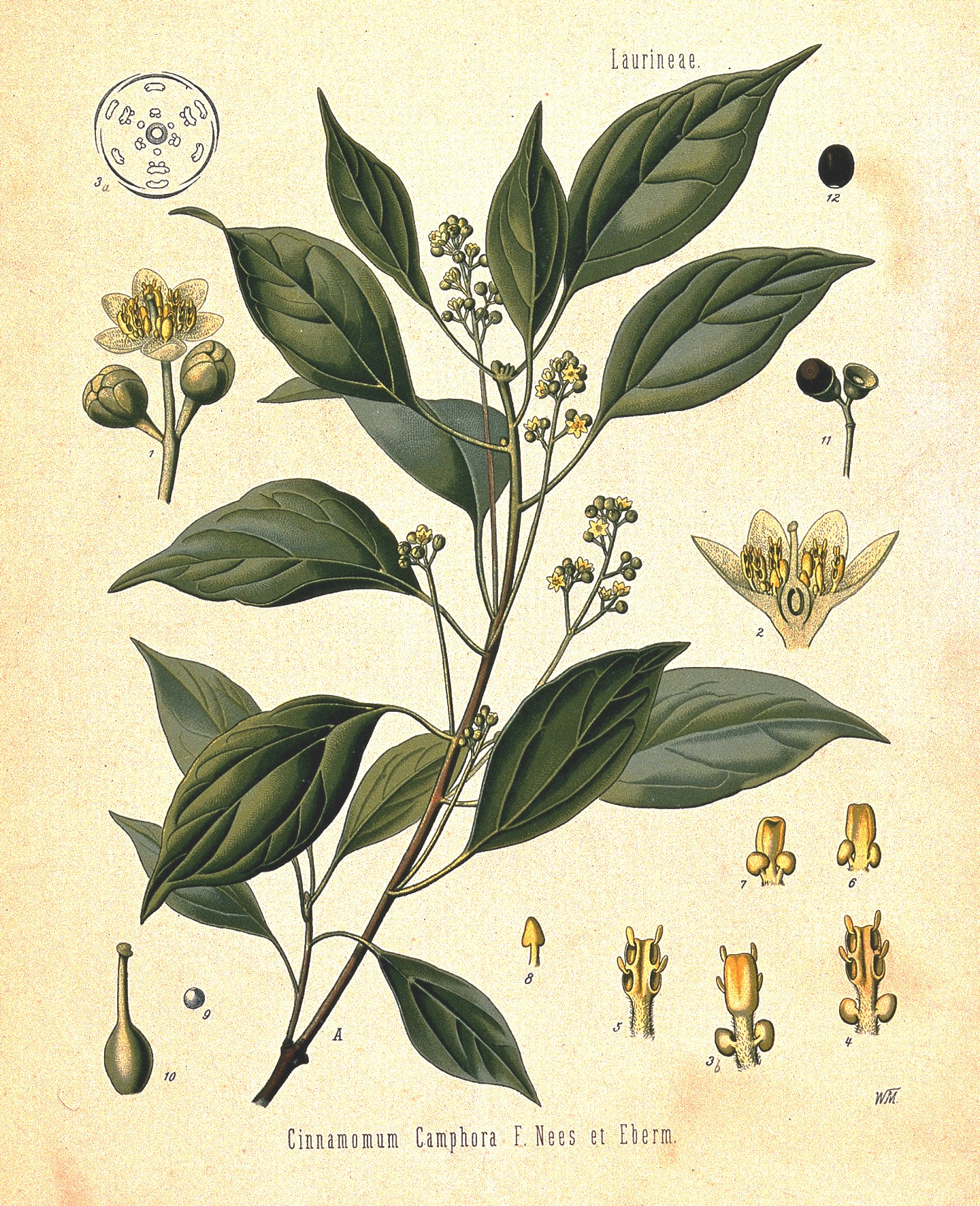 Description –
Cinnamomum camphora is a large tree that can reach 20-30 – 50 m in height. It has a clear bark that is very rough, vertically cracked.
The leaves are lanceolate, leathery, thick, persistent and have a shiny, waxy appearance and a camphor smell when crushed.
The flowers are white, with a perianth of two deciduous whorls; androecium of four whorls; monocarpellar gynoecium.
The fruits, produced in clusters, are black berries of about 1 cm in diameter.

Cultivation –
Cinnamomum camphora has long been cultivated for camphor and for timber production. The production and shipping of camphor, in a solid, waxy form, was one of Taiwan’s main industries before and during the Japanese colonial era (1895-1945).
This plant succeeds in most soils but prefers fertile, sandy soil that retains moisture and is well-drained in full sun or light shade.
It tolerates a pH between 4.3 and 8.
It is hardy and can survive occasional lows down to around -10 ° C when fully dormant.
The roots are very sensitive to disturbances and transplants.
It is a pest tolerant and particularly invasive plant.
Camphor was introduced in various countries, including Australia and the United States.
In Australia it was introduced in 1822 as an ornamental tree for use in public gardens and parks.
Very soon it became an invasive plant throughout Queensland and from central to northern New South Wales, where it adapted to the humid and subtropical climate.
Cinnamomum camphora tends to invade rainforests and pastures and also competes against eucalyptus trees, some species of which are the koala’s only food source.
It was introduced in the United States around 1875 and has naturalized in parts of Alabama, California, Florida, Georgia, Hawaii, Louisiana, Mississippi, North Carolina, Texas and South Carolina. Florida has been declared a category I invasive species.

Customs and Traditions –
The Camphor Tree is grown commercially in China and Japan as a medicinal tree and also for its essential oil.
Especially at one time it was used in medicine and was also an important ingredient in the production of smokeless and celluloid gunpowder.
The species contains volatile chemical compounds in all parts of the plant and the wood and leaves are steam distilled to obtain the essential oils.
It contains six different varieties (chemotypes) with different concentrations of its active ingredients which are: camphor, linalool, 1,8-cineol, nerolidol, safrole and borneol.
In China, field workers avoid mixing chemotypes during harvest based on their smell. The cineole fraction of camphor is used in China to make the fake “eucalyptus oil”.
Chemical variants (or chemotypes) appear to depend on the tree’s country of origin. for example, C. camphora grown in Taiwan and Japan is normally very rich in linalool, often between 80 and 85%. In India and Sri Lanka, the chemotype variety with a high concentration of camphor remains dominant. However, C. camphora grown in Madagascar is rich in 1,8-cineole (on average between 40 and 50%). The essential oil of Madagascar trees is commercially known as ravintsara.
The first rudimentary stills, for the extraction of the various active ingredients, were set up in the mountainous areas where the tree is usually found.
Camphor was one of the most profitable trades of several major Japanese government monopolies.
Wood has an insect repellent quality.
The resulting camphor is a white crystalline substance.
It has been used for many centuries as a culinary spice, component of incense and medicine.

Preparation Method –
Camphor is obtained by steam distillation of wood reduced to splinters and refined by sublimation. It has the appearance of white crystals with a characteristic odor, not very soluble in water but very much in alcohol, chloroform, ether. A subsequent distillation produces white, brown and blue camphor oil. The essential oil is used as an anti-moth and for other uses.