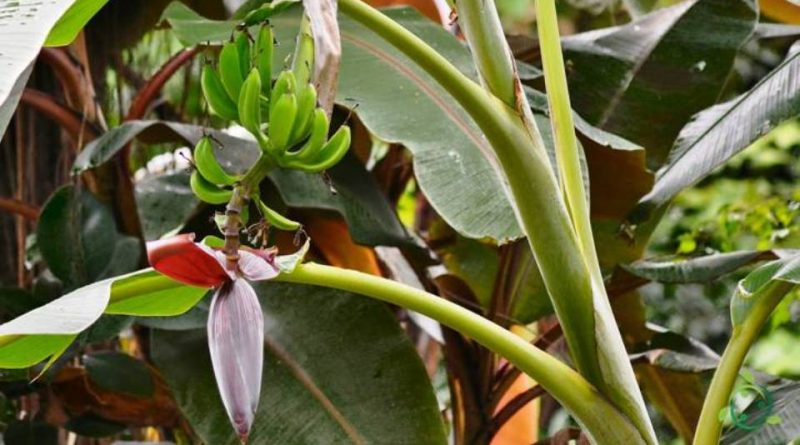 The banana (Musa acuminata Colla, 1820) is a plant of the Musaceae family native to Southeast Asia. There are more than a thousand cultivars obtained from hybridization with M. balbisiana, which produce most of the edible bananas on the market.
The banana tree is a very particular plant: its mode of reproduction, in fact, does not involve the use of any type of seeds.
The shoots (suckers) of a new plant, in fact, grow directly on the rhizome, which is a stem that lives underground and develops horizontally.
By storing nutrients directly from the ground, a sprout can be born from these underground stems which subsequently grows up and out of the ground.
Contrary to popular belief, the banana tree is not a tree, but a kind of giant grass.
Each sprout grows for about a year and, after reaching even 9 meters in height, it generates the fruits (bananas) and then dies.

Multiplication by suckers always ensures trees identical to the mother plant.
For the propagation of this plant, in the spring period, the suckers that grow at the base of the same are detached with a well sharpened and disinfected knife and then put to root in a pot containing a mixture of equal parts of peat and sand.
After rooting, which is signaled by the appearance of new leaves, the new banana trees must be grown in pots for at least 10 years before being planted in the open ground.
The flowers will appear after 2-3 years.
The Banana bears fruit only in tropical climates and can live in mild climates, but it should never be placed in areas even with light shade.
Furthermore, the banana tree needs protection from the winds.
Therefore, if you want to plant the banana in mild climates (such as the Mediterranean ones) it can grow more as an ornamental plant, as it will have very poor or insufficient yields.