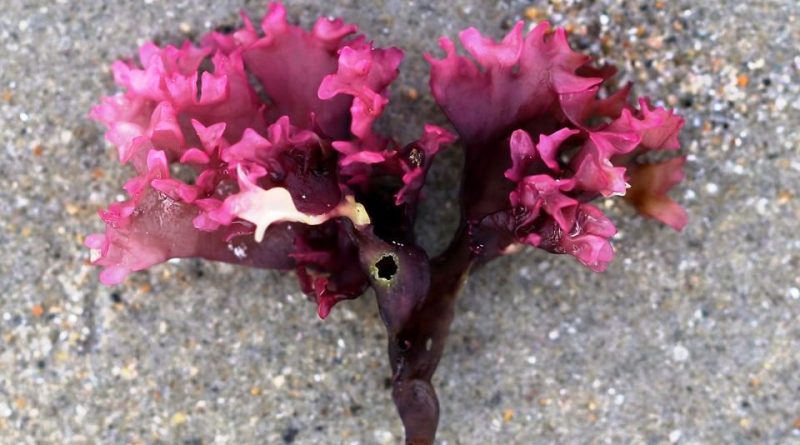 Etymology –
The term Chondrus comes from the ancient Greek χόνδρος (khóndros, “cartilage”), due to the gelatinous substance it produces when this seaweed is boiled.
The specific epithet crispus comes from crisp crinkle, crinkle: crinkled, curly, frizzy.

Geographic Distribution and Habitat –
Chondrus crispus is a very widespread red algae along the coasts of Ireland and Great Britain, but is also found on the coasts of Iceland, the Faroe Islands, the western coasts of the Baltic Sea and Spain. It is also found on the Atlantic coasts of Canada and the United States, while distribution outside the Atlantic has yet to be verified.
Its habitat is that of the temperate waters of both Atlantic coasts where it develops on the rock from the intermediate intertidal zone to the subtidal zone, up to the ocean floor. It is able to survive in minimal sunlight. 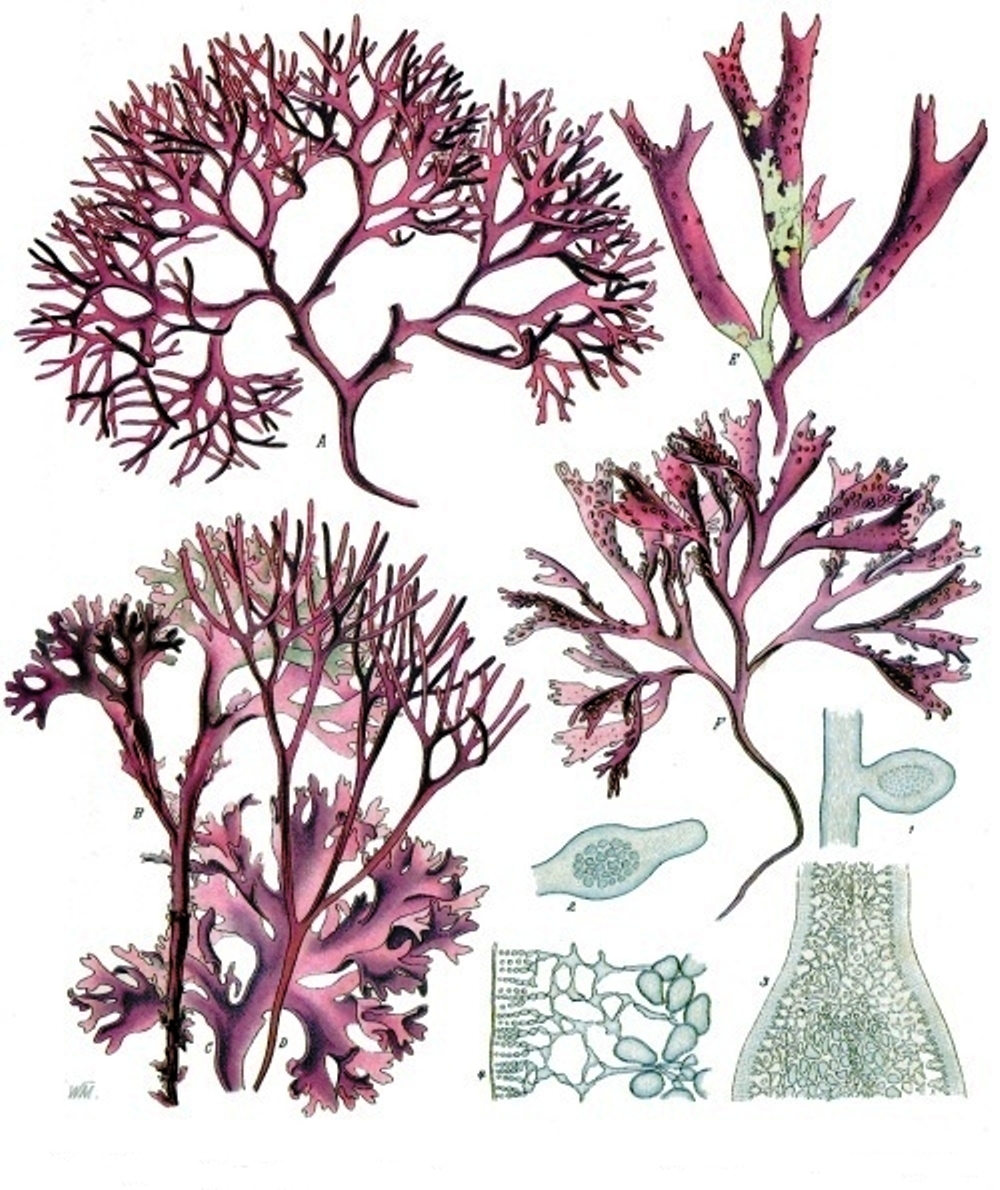 Description –
The Irish moss, known among consumers as Iralnda moss, is a small bush-shaped alga, with dense reddish violet ramifications reaching 15-30 cm in length, covering the rocks near the coast where the water is lower.

Cultivation –
Chondrus crispus has a life cycle alternation common in many species of algae. The two distinct stages are the sexual haploid gametophyte stage and the asexual diploid sporophyte stage. Also, a third stage – the carposporophyte – forms on the female gametophyte after fertilization.
Male and female gametophytes produce gametes that fuse to form a diploid carposporophyte, which forms carpospores, which develop in the sporophyte. The sporophyte then undergoes meiosis to produce haploid tetraspores (which can be male or female) which develop into gametophytes. The three stages (male, female and sporophyte) are difficult to distinguish when they are not fertile; however, gametophytes often show blue iridescence.
Its fronds are harvested by hand towards the end of the summer avoiding to detach the base of the plant anchored to the bottom, to allow it to grow back again; they are first washed in salted water to clean them from the sand and then left to dry in the sun and wind for about ten days, during which they discolour becoming a silvery white.

Customs and Traditions –
Irish moss, as well as agar-agar, has been used for its thickening properties, producing a softer gelatin than that obtained from agar-agar and is used to bind soups, stews, sauces and also as a thickener and stabilizer for food. (for ice cream) and for cosmetic uses. In these uses it is indicated with the abbreviations: E407 or E407b.
This alga has a high content of starches, polysaccharides that give it its thickening power; these starches are known as carrageenans.
From a therapeutic point of view it seems that carrageenan may be useful in the treatment of disorders such as dysentery, urinary tract infections and chronic lung infections.
In addition, carrageenan has purifying and detoxifying properties, particularly in the colon. The alga performs this mechanical purification function by entrainment thanks to the formation of a gelatinous mass. At the same time, carrageenans (gels formed from carrageenan) have chelating properties, as do the alginates of brown algae. Through chelation, carrageenans are able to eliminate chemical residues, heavy metals and radioactive substances from the body.
It is said that during the Second World War when the populations of the islands bordering the English Channel, being short of food, consumed abundant quantities of it, there was a decrease in the frequency of colds and bronchial infections.
This alga is rich in minerals, especially iodine and is a good reserve of vitamin C. Unlike agar-agar, it is not processed, so a greater quantity must be used proportionally.

Preparation Method –
Chondrus crispus, before cooking, needs a thorough cleaning to remove any retained pieces of shell.
The preparation therefore requires, first a short soaking in water and then a good cooking to thicken; if cooking is short, it can be eaten like any other land vegetable.
A thick drink, made with Chondrus crispus, lemon and a natural sweetener was once used as a tonic for the respiratory system.

One thought on “Chondrus crispus”