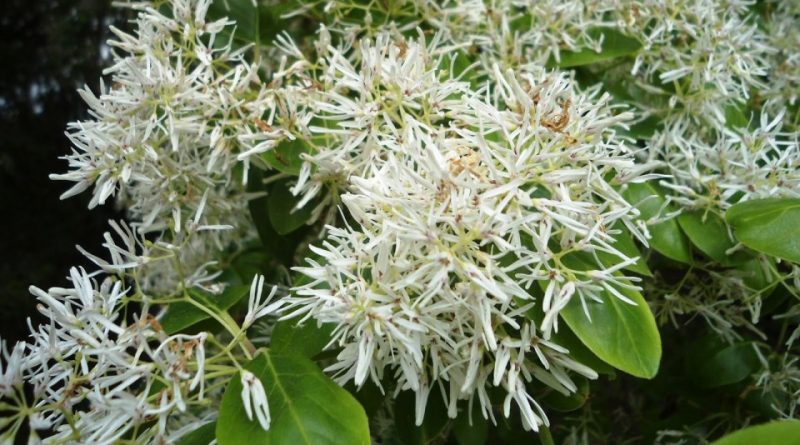 The White fringetree (Chionanthus virginicus L.) is an arboreal species belonging to the Oleaceae family.

Etymology –
The term Chionanthus comes from the Greek χιών chión neve and from ἄνϑοϛánthos fiore: for snow-white flowers.
The specific virginicus epithet in reference to Virginia, Virginian.

Geographic Distribution and Habitat –
The White fringetree is a plant native to the savannas and plains of the southeastern United States, from New Jersey in the south to Florida and west to Oklahoma and Texas. 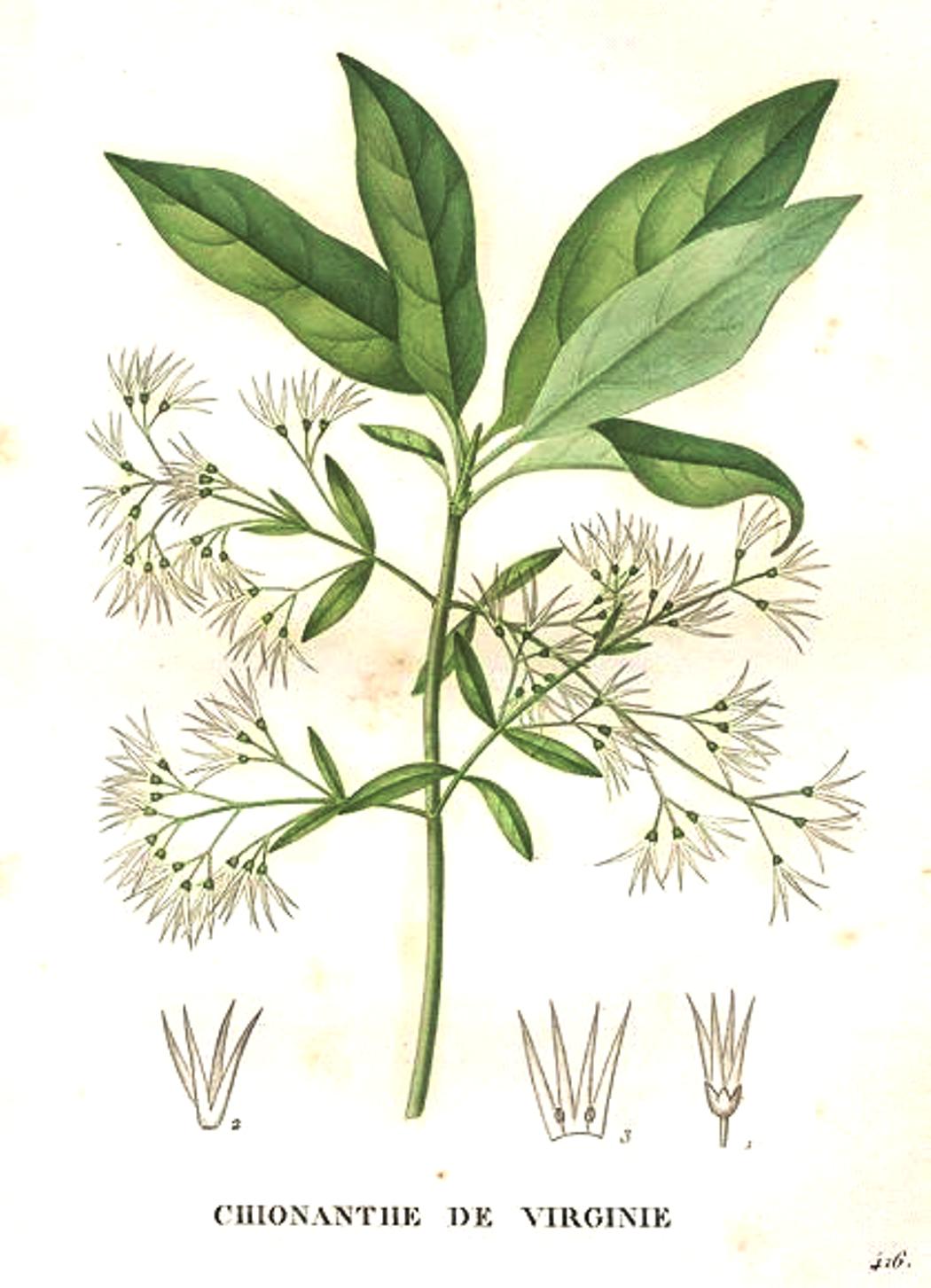 Description –
The White fringetree is a plant in the form of a deciduous shrub or small tree, provided with a robust and deep root system, which grows up to 10-11 meters in height, although the ordinary size is smaller. Furthermore, this plant is usually dioecious, although spontaneous plants carry flowers of both sexes.
The large and rounded crown is made up of numerous variously branched branches covered with large dark green leaves.
The bark is scaly, brown in color tinged with red.
The shoots are light green, initially fluffy, then turn light brown or orange.
The buds are light brown, oval, sharp, 3 millimeters long.
The leaves are opposite, simple, ovate or oblong, 7.5 to 20 cm long and 2.5 to 10 cm broad with a 2 cm long petiole; these are hairless above and finely fluffy below, particularly along the veins, and turn yellow in autumn.
The flowers are richly perfumed, with a pure white corolla, deeply quadrilobed, the lobes are filiform, from 1.5 to 2.5 centimeters long and 3 millimeters broad; these are carried in axillary, hanging panicles, 10 to 25 centimeters long and develop when the leaves are half grown, in the period of May.
The fruit is an ovoid drupe varying in color from dark blue to purple and 1.5 to 2 centimeters long, containing a single seed (rarely two or three), which ripens between late summer and mid-autumn.

Cultivation –
Virginia Chionanthus is a beautiful ornamental tree prized for its distinctive pendulous flowers with snowflake-like petals.
It is a plant which, to give copious blooms, prefers bright and sunny places for many hours a day. It does not fear the cold but is susceptible to frost.
It is also a plant that grows strong and luxuriant in any type of soil even if it prefers fresh, humid, rich in organic matter, well drained and acidic ones.
It is satisfied with the rains but should still be watered in periods of prolonged drought, especially in the period of vegetative growth, in summer, especially in coincidence with flowering.
The plant in the places of origin reproduces by seed. The seeds of Chionanthus are seeds with double dormancy and in order to germinate they need two vernalizations (cold stratification) alternating with a period of heat. As an alternative to this technique or together, hormones such as gibberellins can be used.
It can also be propagated by agamic way by cutting or by layering and, in both cases, rooting will take at least 2 years.
Another method of propagation widely used by growers is the grafting of branches on the Ash, a tree of the same family that is very long-lived and resistant to parasites, fungal diseases, bad weather and climatic adversities.
As an ornamental plant it is resistant to pollution and, for this reason, it can be grown in public parks and also along the banks of rivers and artificial lakes.

Customs and Traditions –
The name of the species was originally mentioned by Linnaeus as Chionanthus virginica, treating the genus as female; however, according to the provisions of the ICBN, the genus is correctly treated as masculine, so the species has been renamed virginicus.
Since ancient times, Chionanthus virginicus has been recognized as beneficial properties for the health and well-being of our body. The Indians used the edible parts (roots) for the preparation of decongestant infusions and herbal teas for the oral cavity, such as gingivitis and canker sores of various kinds, and also for the treatment of liver and kidney diseases.
The dried roots and bark were used by Native Americans to treat skin inflammations. The crushed bark was used in the treatment of sores and wounds.
In general it is therefore used as:
– diuretic, vulnerary, stimulant of biliary secretion, cholagogue, febrifuge, treatment of jaundice, hepatomegaly, congestion of the hepatic portal vein. Externally it is used for ulcers and fissures.
It is also used as an ornamental plant, and although it is native to the southeastern United States, it is hardy to the north and is widely planted in gardens, where specimens are often grown with multiple trunks. The color of autumn is a beautiful light yellow, which contrasts here with viburnums and evergreen plants.

Preparation Method –
The roots and bark of the snow tree are used for various infusions and herbal teas.
The fruits, on the other hand, can be preserved in brine like olives.