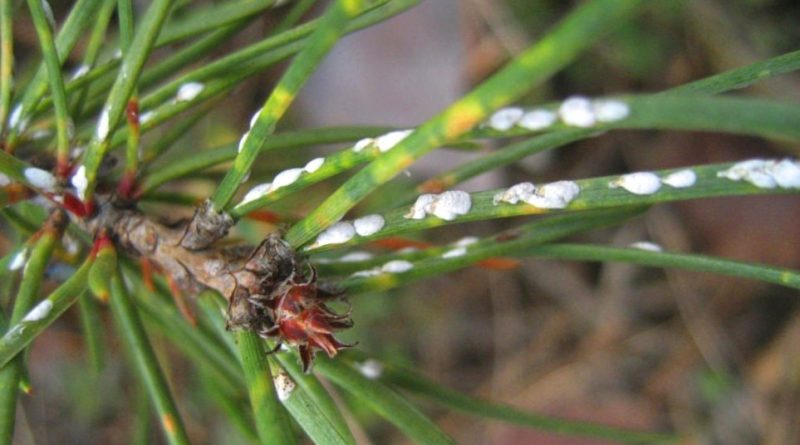 Geographic Distribution and Habitat –
The white pine scale is a diaspid that lives on Pinaceae, such as Pinus brutia, halepensis, mugo, nigra and subsp. laricio + pallasiana, pinaster, pinea, ponderosa and sylvestris.
It has also been reported on Abies pinsapo and Cedrus libani.

Morphology –
This cochineal is characterized by a great sexual dimorphism.
Females are apterial and sedentary and are covered with a white waxy growth secreted by their ceriparous glands.
They have the appearance of small white oval scales. Under the waxy cover is the insect, pyriform, just over a millimeter long and 0.6 mm wide, with tuberculous antennae and the extremity of the body with elongated and branched appendages.
Males have only one pair of hyaline wings. Their body is narrow and elongated, black in color and slightly smaller than females. They have long antennae.
The eggs are elongated in shape with rounded ends.
The nymph is two-phase. In the first phase its shape is oval, elongated, with the front edge truncated. It has antennae with five formations, a strong beak, with long filaments, developed legs, and six broad ceriparous tubes on each side of the abdomen. The general coloring of the body is brown.
In the second phase they have a pyriform and very elongated outline, with a maximum width slightly above the middle of the abdomen. The antennae are tubercle-shaped, with a sharp tip. In the rear they have four longitudinal sets of ceripar tubes per segment.

Attitude and Life Cycle –
The Leucaspis pini cochineal spends the winter in the egg state, protected by the female. In early spring, as soon as the activity of the plant resumes, they hatch.
The newly hatched larvae disperse in search of a suitable place to fix themselves, thus starting to secrete the substance that gives the attacked areas a whitish appearance.
Adult males appear in summer and can fly to females which are fixed throughout their life cycle.
This insect sucks the sap from the needles and at the same time injects saliva into them, a factor that causes the change of their color and causing the death of needles and shoots in case of continuous attacks.
The attack of this species is, however, more striking, due to their conspicuous appearance on the needles even if usually they do not cover large areas and although the trees lose some needles, it is extraordinary that they die or are particularly damaged; It should be noted, however, that trees affected by this parasite are more exposed to other diseases than unattached trees.
The species makes only one annual generation.

Ecological Role –
In case of strong infestations of Leucaspis pini the leaves fall, leaving the plants on average bare, with a stunted and suffering aspect; often, the needles in the process of drying get stuck between the green ones, making the plant take on an ugly aesthetic appearance.
The fight against this pest, where possible, must be carried out at the vegetative restart, from the end of April-May onwards, with repeated interventions, at least 2-3, depending on the degree of infestation.
We recommend the use of white oils activated with products such as Marseille soap and Neem oil.
At one time, white oils activated with phosphorganics were used, a remedy that greatly interfered with the biocenosis of beneficial insects, including, in addition to the pollinators, the calcidoid hymenoptera Prospaltella leucaspidis, which is a parasite to be taken into consideration, is emphasized.
The interventions must be repeated for a few years, until the new vegetation “remains clean”, without the formation of new shields at the base of the leaves.
The concentration of the white oil must take into account the sensitivity of the plants and the external temperatures at the time of interventions.