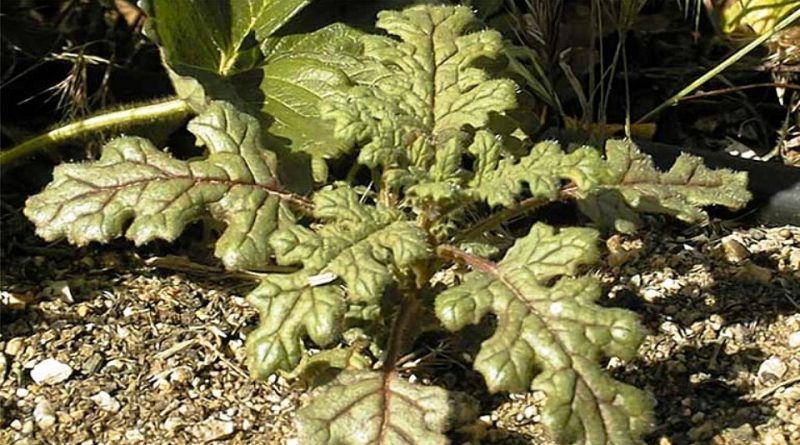 Etymology –
The term Dysphania comes from the Greek δυσφανες dysphanes indistinct, not very evident (from the adversary prefix δυσ- dys- and from φανερός phaneros visible, showy): for the not very evident flowers, enclosed in the receptacle.
The specific epithet botrys comes from the Greek βότρυς bόtrys cluster: usually referring to the inflorescences gathered in thick clusters.

Geographic Distribution and Habitat –
Jerusalem oak goosefoot is a plant native to the Mediterranean region and with a vast Eurasian distribution, today it has become subcosmopolitan, recently segregated from the genus Chenopodium.
In Italy it is present in all regions (reported doubtfully for the Marches).
Its habitat is that of the uncultivated, in landfills, on the rubble, sometimes along the roads, below the upper mountain belt.
In eastern North America it is found on garbage heaps, roadsides and disturbed soil; in Tibet in the valleys, river terraces, around houses and along roadsides. 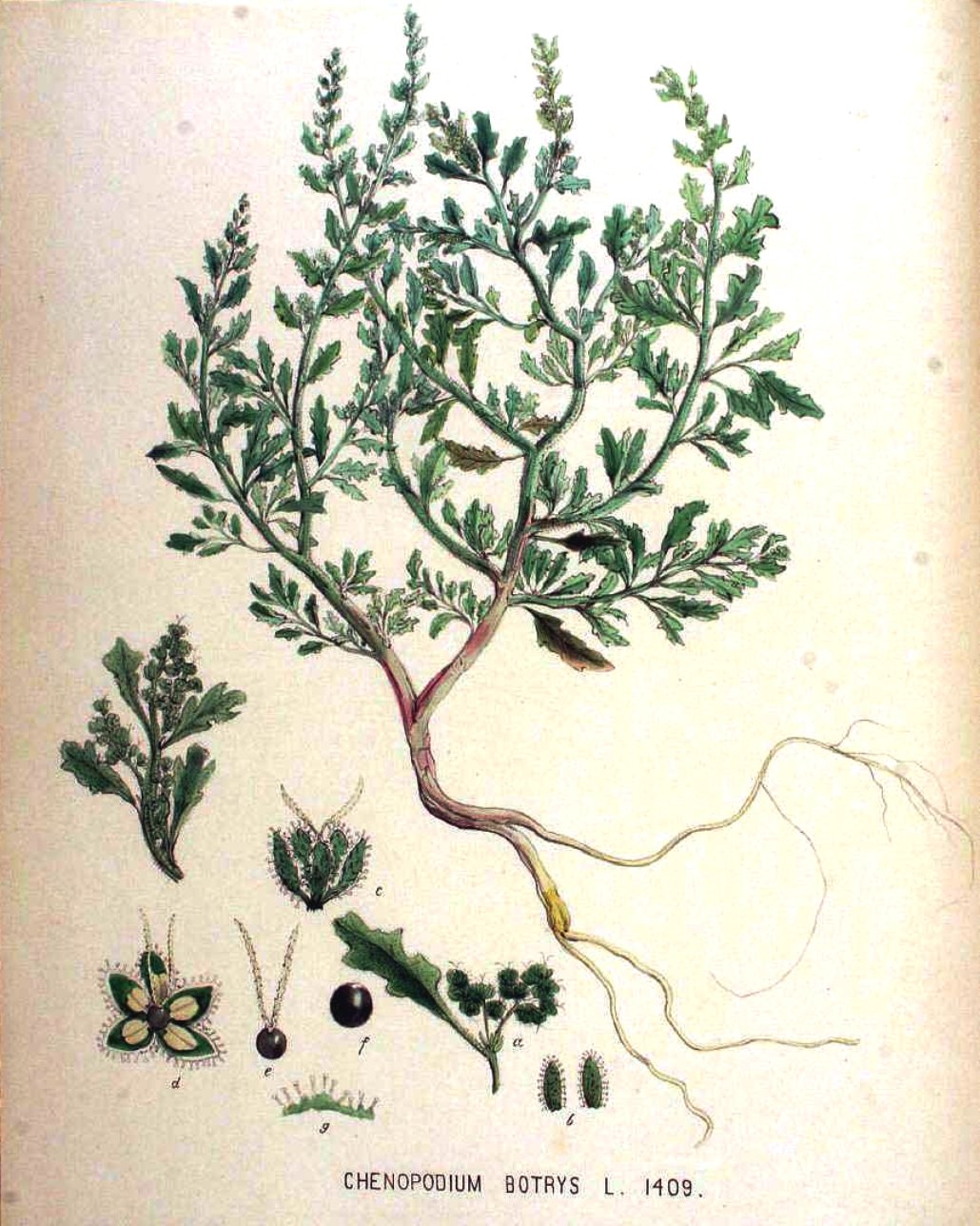 Description –
Dysfania botrys is an annual growing herbaceous plant that can grow up to 0.6 m.
It blooms in the Flowering period: June-September and also October, depending on the area. The species is hermaphrodite (has both male and female organs) and is wind pollinated.
The seeds ripen from August to October.
The fruits are subglobose achenes (utrticoli), with acute margin, pericarp adhering to the seed, membranous, papillary. Semi horizontal, subglobose, 0.5-0.8 x 0.5-0.7 mm, smooth, with obtuse and slightly carinated margin, blackish.

Cultivation –
Jerusalem oak goosefoot is an easily cultivable plant, grown as an annual, which succeeds in most soils as long as they are not shaded.
It prefers moderately fertile soils and the cultivation of this plant is done for its edible leaves.
It can only be harvested 31 days after sowing.

Customs and Traditions –
The dried flowers of this plant are aromatic and ornamental, and the leaves give off a pleasant aromatic smell when handled.
The whole plant has a strong scent, reminiscent of stock cubes, and can be used as a seasoning in the kitchen.
The leaves and seeds of all members of this genus are more or less edible. However, many of the species in this genus contain saponins, albeit usually in too small quantities to cause harm. Although toxic, saponins are poorly absorbed by the body and most pass straight through with no problems. They are also broken down to a large extent during the cooking process. Saponins are found in many foods, such as some beans. Saponins are much more toxic to some creatures, such as fish, and hunter tribes have traditionally placed large quantities in streams, lakes, etc., to numb or kill fish.
This plant also contains oxalic acid, which in large quantities can retain some of the nutrients in food.
However, it is a very nutritious vegetable when consumed in reasonable quantities.
Furthermore, cooking the plants will reduce their oxalic acid content. People with a tendency to rheumatism, arthritis, gout, kidney stones or hyperacidity should be especially careful if they include this plant in their diet as it can aggravate their condition.
Raw leaves should only be eaten in small quantities.
The seeds can be ground and used with flour to make bread, etc.
The seed is small and impractical, it should be soaked in water overnight and rinsed thoroughly before being used to remove any saponins.
The leaves are also used as a substitute for tea.
From a medicinal point of view, Dysfania botrys is an anti-asthmatic plant. It is also used in the treatment of phlegm. The plant was used as an anthelmintic to replace Chenopodium ambrosioides. Contains 0.04% essential oil.
A green-gold dye can be obtained from the plant; moreover, the dried plant is a repellent for moths.
Moreover, due to its scent, aromatic and ornamental ears are used and the whole plant being very aromatic is used as a perfume in cushions, bags, baskets, etc.

Preparation Method –
Both the seeds and the leaves, both cooked and raw, can be consumed from this plant; however, it is recommended to eat them cooked to eliminate most of the substances, such as oxalates and saponins, which would make digestion and assimilability problematic for people with some diseases.