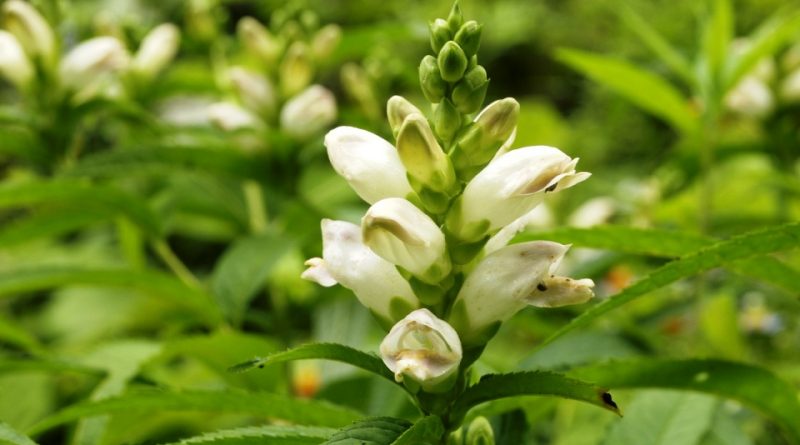 The white turtlehead (Chelone glabra L.) is a herbaceous species belonging to the Plantaginaceae family.

Etymology –
The term Chelone comes from the Greek Χελώνη Khelônê Chelone, a nymph of Greek mythology who had ridiculed Zeus and Hera by not showing up for their wedding celebrations and who, as a punishment, was transformed into a turtle and condemned to carry her home on her back: for the flowers that resemble a turtle’s head.
The specific hairless epithet comes from hairless, hairless.

Geographic Distribution and Habitat –
Chelone glabra is a plant native to North America where it grows in an area ranging from Georgia to Newfoundland, Labrador and from Mississippi to Manitoba in Canada.
Its natural habitat is wetlands, such as riparian forests and marshes. 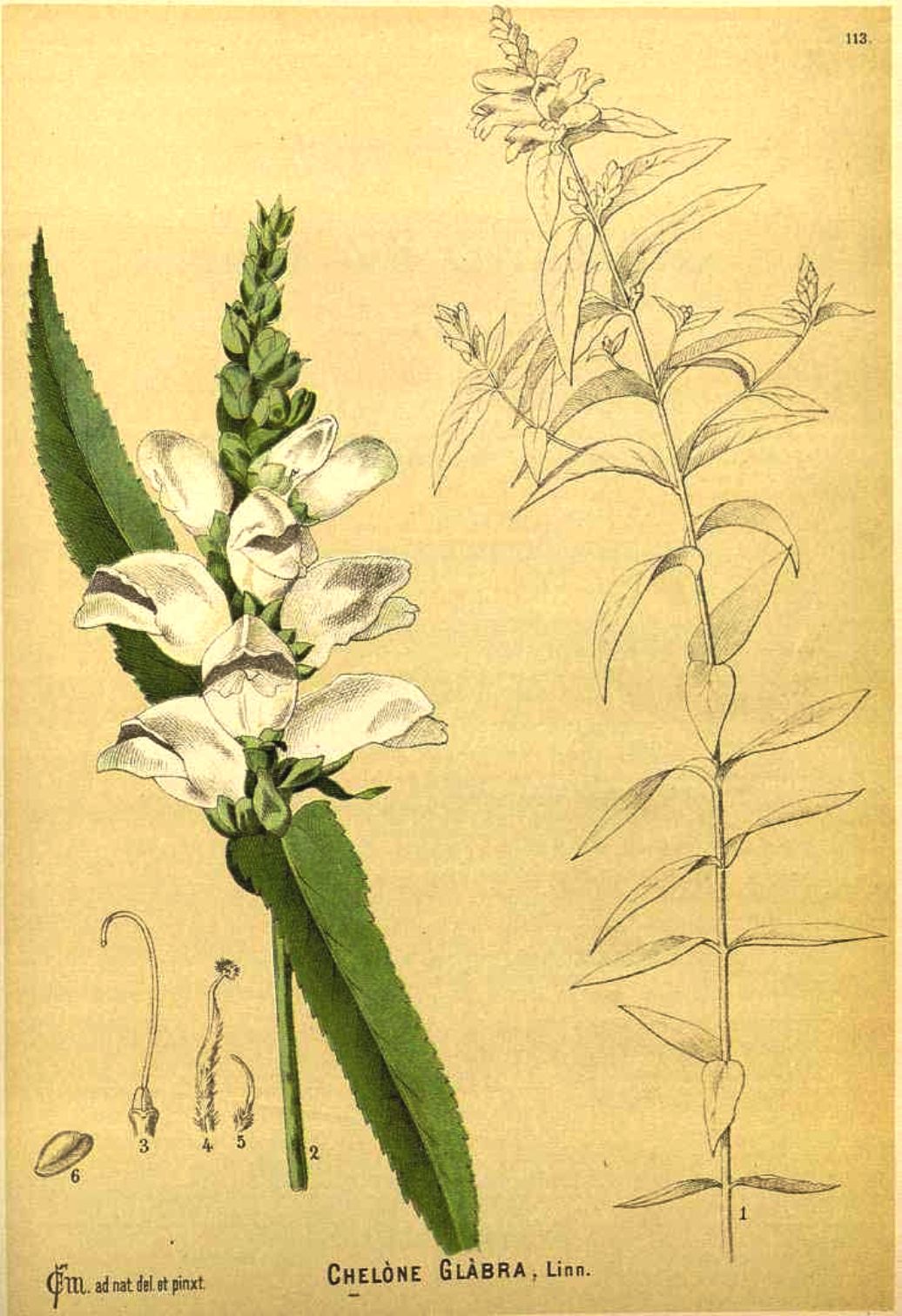 Description –
Chelone glabra is an erect herbaceous perennial that grows up to 60-90cm in height and 45-75cm in width.
It tends to form agglomerations with showy and dense terminal tips of two-lipped flowers, white or tinged with pink in the period from late summer to autumn. Flowering lasts for 3-4 weeks and the hooded flowers are shaped like turtle heads that just emerge from the shell, hence the common name.
These flowers, attractive to butterflies and hummingbirds, stand above a bush of dark green foliage that stays beautiful all season long.
The leaves are lanceolate with coarse teeth, 20 cm long and arranged in pairs along the stems.

Cultivation –
This plant is best grown in moist or wet, rich soils and in partial shade. It also appreciates the mulching of composted leaves, especially in sunny areas. The plant can be topped in spring to reduce the height of the mature plant, especially if the plants are growing in heavily shaded areas where they are more likely to need support. In optimal environments, however, staking is usually not required. It spreads slowly from the rhizomes.
This plant is a welcome addition to borders, woodland gardens, near ponds and streams, marshy gardens.
The plant should be pruned at the end of the season.
Furthermore, the plant has no particular problems with parasites or diseases except for powdery mildew and rust.
Propagation can also take place by seed or by division in spring. The cuttings can be taken in the spring.

Customs and Traditions –
The classification of this plant has had some difficulties due to the attribution to the family. Following studies on the DNA sequence it is now considered to belong to the Plantaginaceae family.
In the early taxonomic treatises the species was divided into a number of subspecies, but more recent studies indicate no morphological or genetic basis for these taxonomic categories.
Chelone glabra is used as an ornamental plant for shade or woodland, marsh, ponds or water gardens. Its use in gardens of wild flowers or native plants is also interesting.
It is also used as a border border as long as the soil moisture requirements are met.
Chelone glabra is a very bitter herb with a tea-like flavor that acts primarily as a tonic for the liver and digestive system.
The herb also has antidepressant and laxative effects.
The decoction of the whole herb is antibile, aperient, appetizer, cathartic, cholagogue, detergent, tonic, vermifuge.
It is used internally in the treatment of weakness, liver disease, gallbladder problems, gallstones etc.
It is used to relieve nausea and vomiting, intestinal colic and expel worms.
Its invigorating effect on the digestive system has made it beneficial in the treatment of anorexia nervosa.
It is applied externally as a soothing ointment on hemorrhoids, inflamed tumors, irritable ulcers, inflamed breasts, etc.
The leaves have antibacterial, antihelminthic, tonic and detergent properties, with a peculiar action on the liver, and are widely used in dyspepsia, weakness and jaundice, in liver diseases, and for worms in children for whom the powder or decoction can be used internally or by injection.
As an ointment it is recommended for inflamed tumors, irritable ulcers, inflamed breasts, hemorrhoids, etc.
It is considered a mild herb that can be used by both children and the elderly, especially for digestive problems caused by prolonged illness.
The herb is also touted to have antidepressant properties.
Externally, the herb has been used in the form of an ointment or liniment on hemorrhoids, inflamed breasts, herpes and inflamed and painful wounds, cuts and scrapes.
In the past, Native Americans were known to have used the balm for blood purification purposes and as a treatment for atopic eczema (atopic dermatitis) and chronic rheumatic conditions.
Furthermore, it seems that the plant was used as a method of birth control by the Abenaki population, a tribe of Native Americans belonging to the first nations and the linguistic lineage of the Algonquians.
Ecologically it is the main plant on which the Baltimore checkerspot butterfly (Euphydryas phaeton) lays its eggs.
Furthermore, Chelone glabra is a popular plant for deer and is a food plant for Macrophya nigra and Tenthredo grandis (Hymenoptera of the Tenthredinidae family); moreover also a beetle of the genus Dibolia (a beetle of the Chrysomelidae family) has been shown to feed on it.

Preparation Method –
Both the plant and the flowers of this plant are used to prepare ointments, recommended for inflammatory states, ulcers, hemorrhoids, and other similar pathologies.
It can be used by both children and the elderly, especially for digestive problems after long illnesses.