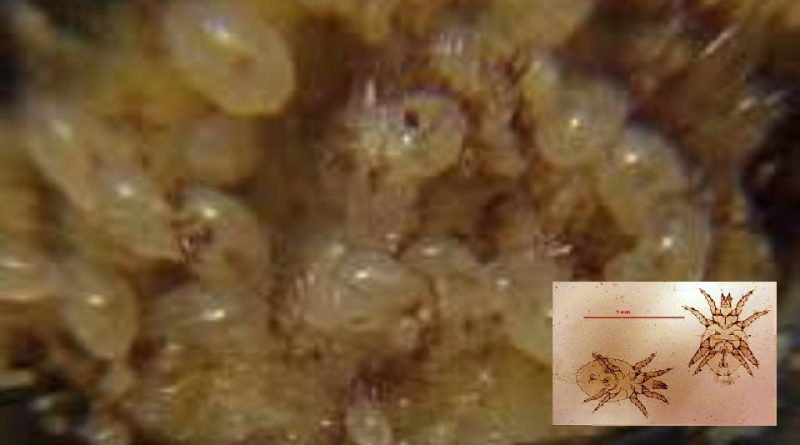 The Bulb Mite (Rhizoglyphus robini Claparédè, 1869) is a mite that belongs to the Acaridae family.

Geographic Distribution and Habitat –
The Bulb Mite is an arachnid with a cosmopolitan geographical distribution and which lives on different parts of host plants such as: onion, garlic and other Allium spp., Lily, gladiolus, hyacinth and freesia, herbaceous species such as barley, oats, rice, rye and wheat, as well as potatoes and carrots.
In Turkey, R. robini is the most common and harmful species present on the bulbs of ornamental plants during the growing season and in storage.

Morphology –
Rhizoglyphus robini is a relatively large, milky-colored mite, up to 1.1 mm in size, which still depends on its diet.
It has an oval body shape (approximately 600-940 μm long) and is translucent with a bright appearance. Its legs are short and reddish-brown in color. The eggs are shiny, clear and oval in shape and are about half the size of the adult mite.
It has external verticals and very short internal scapular silks, some distal silks, on the tarsi I and II they are conical, and with the gnathosome and legs of brown color.

Attitude and Life Cycle –
Rhizoglyphus robini completes a generation in two weeks at a temperature of 25 ° C, laying 400-700 eggs over a period of six weeks.
These mites often mate, the number of copulas depends on the plants they feed on.
This mite in fact feeds on many living and dead plants as it is attracted to injured plant tissues, also devouring live nematodes and various dead invertebrates.
These mites are sensitive to low humidity, forming inactive states, called hypopes, when the substrate they live on dries up. At this stage they can be disseminated by many insects present in the soil, after which they mutate again when brought back to high humidity.

Ecological Role –
Rhizoglyphus robini is a natural inhabitant of the soil that survives in small numbers in the deeper moist soil layers. When stimulated by irrigation they begin to migrate upwards, they feed on the young and weak roots, thus becoming parasites.
The bulb mite damages the bulbs, tubers and corms of many plants in storage and some herbaceous species even in open fields.
Mites that gnaw on young onion and garlic roots cause plants to drop and die; in case of serious infestations, entire crops can be lost.
The stored potato tubers are sometimes damaged by mites that penetrate their buds (“eyes”). The corms of the gladioli in storage can be partially damaged so much that they can no longer reproduce up to a damage of 50% or more.
In other cases, the leaves of the young flowers wither, affecting the production of the flowers. Subsequently, phytopathogenic fungi, such as Fusarium, can increase the damage as they enter the bulbs or tubers through the wounds caused by the mites and can in turn promote the development of the parasite in the germination of onions, aggravating the overall damage.
On the roots of Freesia and Gladiolus damage manifests itself in the form of dark brown streaks and the roots can also be “extracted” internally. Healthy corms or bulbs grown in mite-infested soil will have distorted leaves and growth points. A large number of bulb mites can quickly turn an entire bulb into rotten pulp.
The measures to reduce the presence and effects of Rhizoglyphus robini are to avoid the planting of sensitive ornamental plants (such as Rusco, Ruscus aculeatus Linnaeus) during the summer and autumn.
Also in the past, hot water baths were used to kill mites inside storage bulbs, despite some damage to the plants. Sunburn is an option for controlling outdoors in warm climates.
Chemical control can be carried out by fumigation with metham sodium is very effective and various carbamates and organophosphates can also be used. The parasite has developed broad resistance to many chemicals.
Also often onions, especially once, were immersed in an organophosphate (such as chlorpyrifos).
As for biological control, it is recalled that several mesostigmas, such as Geolaelaps aculeifer (Laelapidae, killed R. robini during storage at room temperature in the Netherlands. The combination of a treatment with hot water (2 hours at 40 ° C ) and biological control can replace the applications of acaricides to control the mite during the propagation phase.
Furthermore, Rhizoglyphus robini can be effectively controlled by Hypoaspis aculeifer.