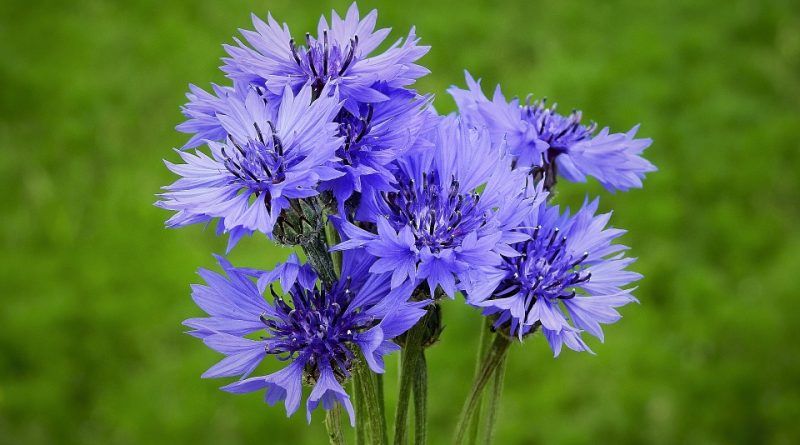 The cornflower (Centaurea cyanus L.) is a herbaceous species belonging to the Asteraceae family.

Etymology –
The term Centaurea is assonant with the Greek κέντρον céntron goad, spur: due to the shape of the bud, or from Centaurus, Greek κένταυρος céntauros centaur, mythological figure half man and half horse; according to some authors, this genre would be dedicated to Chiron who, unlike the other centaurs, had a wise and meek disposition: an expert in science and medicine, he was considered a teacher of Aesculapius, Achilles and other heroes.
The specific cyanus epithet comes from the Greek κύᾰνος cýanos blue, blue: for its color.

Geographic Distribution and Habitat –
Centaurea cyanus is a plant native to temperate Europe but is widely naturalized outside its native range. In the past it was common in Italy, currently it is at risk of extinction and rather rare to see to the point that conservation and reproduction projects have been born.
On the various European reliefs it is present, as well as in the Alps, also in the Vosges, the Jura Massif, the Central Massif, the Pyrenees, the Balkan Mountains and the Carpathians.
In its native European range this species is everywhere in decline, due to the herbicides used in agriculture.
In Great Britain alone, an archaeophytic species, present since the Iron Age, has gone from 264 sites to just 3 in the last 50 years.
However, thanks to its use as an ornamental plant, it has been introduced in many other areas of the world, such as North America and parts of Australia.
Its typical habitat is the cereal fields; it also grows in places such as meadows, wastelands and roadsides. It is part of the so-called “Mexican” species. The preferred substrate is calcareous but also siliceous with neutral pH, low nutritional values ​​of the soil which must be dry.
The altitudinal distribution ranges from 0 up to 1500 m above sea level. 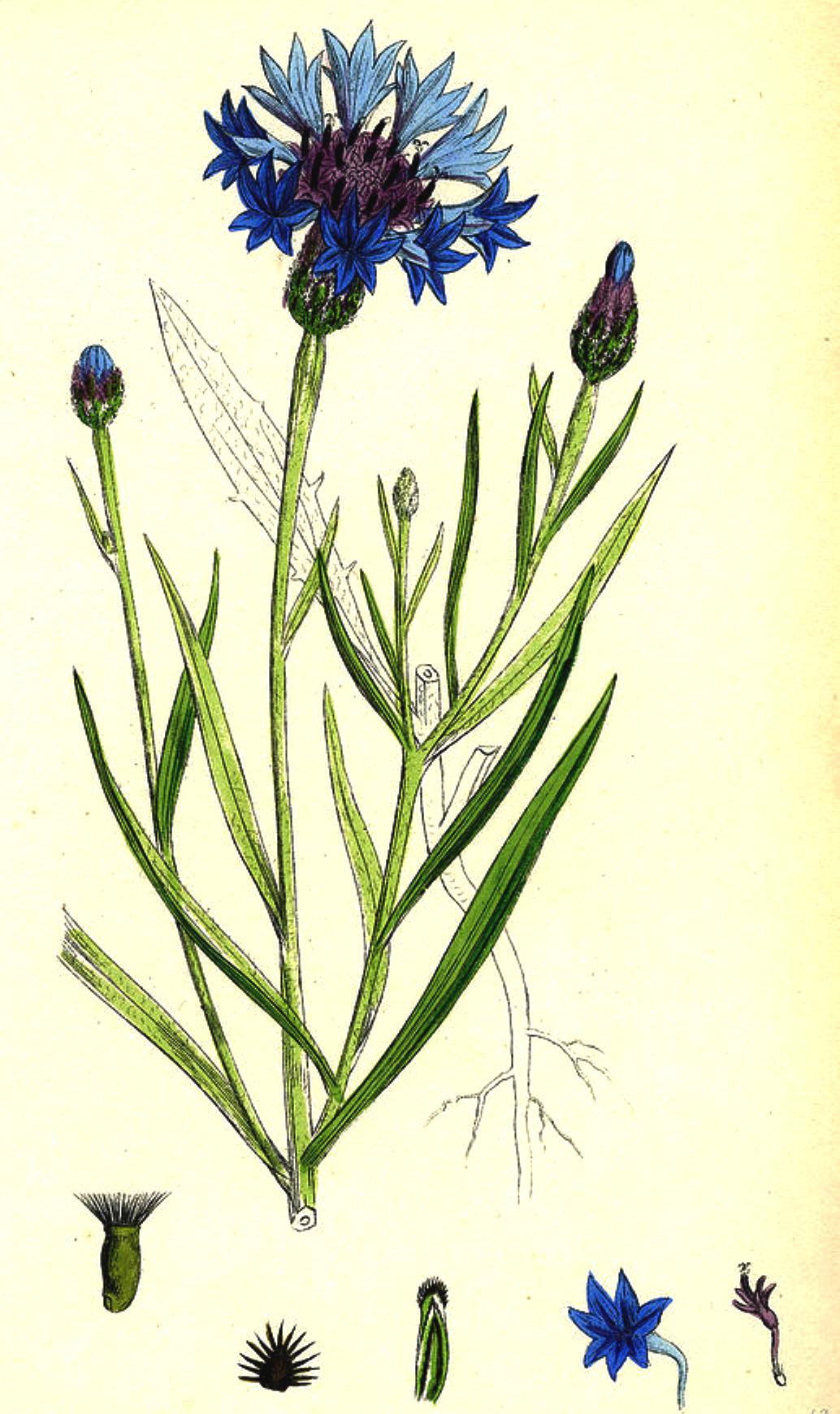 Description –
The cornflower is an annual plant that grows up to a height of 40–90 cm.
The stems are gray-green branched.
The leaves are lanceolate, 1–4 cm long.
The flowers are commonly a deep blue color, produced in flower heads (chapters) of 1.5–3 cm in diameter, with a ring of a few large radius flowers surrounding a central cluster of disc flowers.
The blue pigment is protocyanin, which is red in roses.
It blooms all summer.
The fruits are 4-5 mm Cypseles, of a pale straw-gray color, with pappi of many rigid, brownish, unequal bristles, of 2-4 mm.

Cultivation –
Cornflower is grown as an ornamental plant in gardens, where several cultivars with various pastel colors, including pink and purple, have been selected. Cornflower is also grown for the cut flower industry in various countries such as Canada for use by florists.
For the cultivation technique, see the following sheet.

Customs and Traditions –
Cornflower is mainly used by the pharmaceutical industry in eye care: distilled water has astringent and anti-inflammatory properties and can be used for rinses and eye drops. The bright blue color of cornflower-based products, capable of positively influencing customers, is probably not unrelated to the success of this use.
Cornflowers are colorful flowers that embellish the garden, and used for floral compositions, are of great effect. They are beautiful mixed with spring-summer flowers of various colors, for example the Delphinium, the Roses and the Peonies. With the juice obtained from the flowering tops, a perfumed blue ink is obtained, while mixtures for potpourri are prepared with the dried flowers.
In folklore, cornflowers were worn by young lovers; if the flower faded too quickly, it was taken as a sign that man’s love was not reciprocated.
The blue cornflower has been the national flower of Estonia since 1918 and symbolizes the daily bread for Estonians. It is also the symbol of the Estonian Conservative People’s Party, the Finnish National Coalition Party and the Liberal People’s Party of Sweden.
It is also the official flower of the Swedish province of Östergötland and the school flower of Winchester College and also of Dulwich College, where it is said to have been the favorite flower of the founder, Edward Alleyn.
The blue cornflower was also one of the national symbols of Germany.
This is partly due to the historical story of when Queen Louise of Prussia was fleeing from Berlin and pursued by Napoleon’s forces, hid her children in a field of cornflowers and kept them quiet by weaving wreaths of flowers for them. The flower was thus identified with Prussia, also because it was the same color as the Prussian military uniform.
After the unification of Germany in 1871, it became a symbol of the country as a whole. For this reason, in Austria the blue cornflower is a political symbol of pan-German and right-wing ideas.
It was also worn as a secret symbol that identified members of the then illegal NSDAP in Austria in the 1930s.
Members of the Freedom Party have worn it at the openings of the Austrian parliament since 2006. After the last general elections in 2017 they replaced it with the edelweiss.
The active ingredients present in Centaurea cyanus are:
– centaurine, cyanine, cyanine chloride, lipids, mucilage, flavonoids, pectins, anthocyanins, responsible for the beautiful blue color.
For the use of this plant, the flowering tops are collected during the entire flowering period, from May to July-August, cutting them just below the envelope of bracts, then dry them in the shade in an airy place, store in a jar or in glass or porcelain jars, hermetically sealed and away from sources of light or heat.
Cornflower is used for its anti-inflammatory and expectorant qualities, it is, in fact, an excellent bronchial decongestant, stimulates the expulsion of phlegm and mucus from the bronchi and trachea, calms the cough and disinfects the mucous membranes of the mouth and throat. It performs an effective action as a diuretic, tonic and intestinal astringent. It is also widely used in the ophthalmology field, it is, in fact, particularly effective in the treatment of eye inflammation, and in the decongestant and normalizing external treatment of red eyelids and areas around inflamed eyes.
The parts used are the dried leaves and flowering tops.

Preparation Method –
Among the preparations we mention:
– the decoction: put 30-40 g of dried and chopped flowers in a liter of cold water, bring to a boil and boil for 5-10 minutes, remove from heat and leave to infuse until completely cooled. Filter or strain and store in a bottle in a cool place, take 2-3 cups a day according to the directions, if desired, sweeten with a little honey or sugar;
– the infusion for internal use: infuse 3-5 g of dried and powdered flowers in a cup of boiling water, after 10-15 minutes filter and drink in cups or spoons;
– medicinal wine: macerate, in a liter of white wine, 40-50 g of dried and chopped flowers, after 10-12 days filter and store in a bottle with screw cap. Drink in small glasses if necessary;
– Infusion for external use: infuse 5-10 g of dried and crushed flowers in 100-150 ml of boiling water, allow to cool, then carefully filter through a clean cloth, preferably white. Use to make washes and packs according to the indications of the case;
– to stimulate diuresis and as an intestinal astringent: drink, if necessary, during the day, two cups of the decoction, or three cups of infusion of flowers for internal use. In case of rheumatism, to improve the diuretic action, it is recommended to drink a glass of medicinal wine after the main meals;
– bath for delicate and easily reddening skin: put some dried flowers in the water of the hot tub, but not boiling, mix well and soak as usual for about twenty minutes;
– reddened eyes and eyelids: after a windy day, or a day of work spent in front of the computer or under artificial light, the eyes suffer and are affected, then take an eye bath, about 5-10 minutes using the infusion of flowers for external use (check carefully that no residual flower particles are present in the liquid);
– for gray or white hair: to prevent yellowing of white or gray hair, rinse it several times with the infusion for external use, to give the hair blue reflections and shine;
– to thicken the eyebrows: prepare a mixture with 25 g of Cornflower flowers, 15 g of Nettle leaves, 10 g of Sage leaves and 10 g of Fumaria, infuse a tablespoon of the mixture thus prepared in a glass of water hot, after ten minutes filter and use to wet the eyebrows three times a day;
– astringent tonic for oily skin: use the infusion for external use as a tonic, pass on the face twice a day, rubbing lightly, a cotton pad soaked in the infusion.