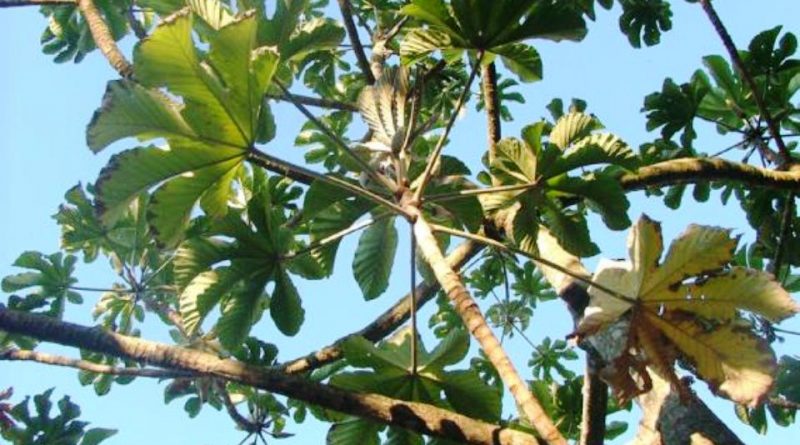 The Trumpet tree (Cecropia peltata L.) is an arboreal species belonging to the Urticaceae family.

Etymology –
The term Cecropia comes from the Greek Κέκροψ Kecrops Cecrops, the mythical Attic king who founded Athens.
The specific epithet peltata comes from light crescent-shaped pélta shield (from the Greek πέλτη pélte small shield): due to the presence of organs having the appearance of a small shield.

Geographic Distribution and Habitat –
Cecropia peltata is a plant with a distribution range that goes from southern Mexico through Central America to North South America, Guyana, Trinidad and Tobago and Jamaica. This species was introduced in Africa, Asia and the Pacific.
This plant has been listed as one of the 100 most invasive exotic species by the Invasive Species Specialist Group.
Cecropia peltata has replaced the similar, native African plant, Musanga cecropioides, along the main roads of Cameroon.
Its habitat is those of moist limestone soils, with clear ground, mainly in pastures or in second growth, often in thickets or modified forests, at 900 meters or less. 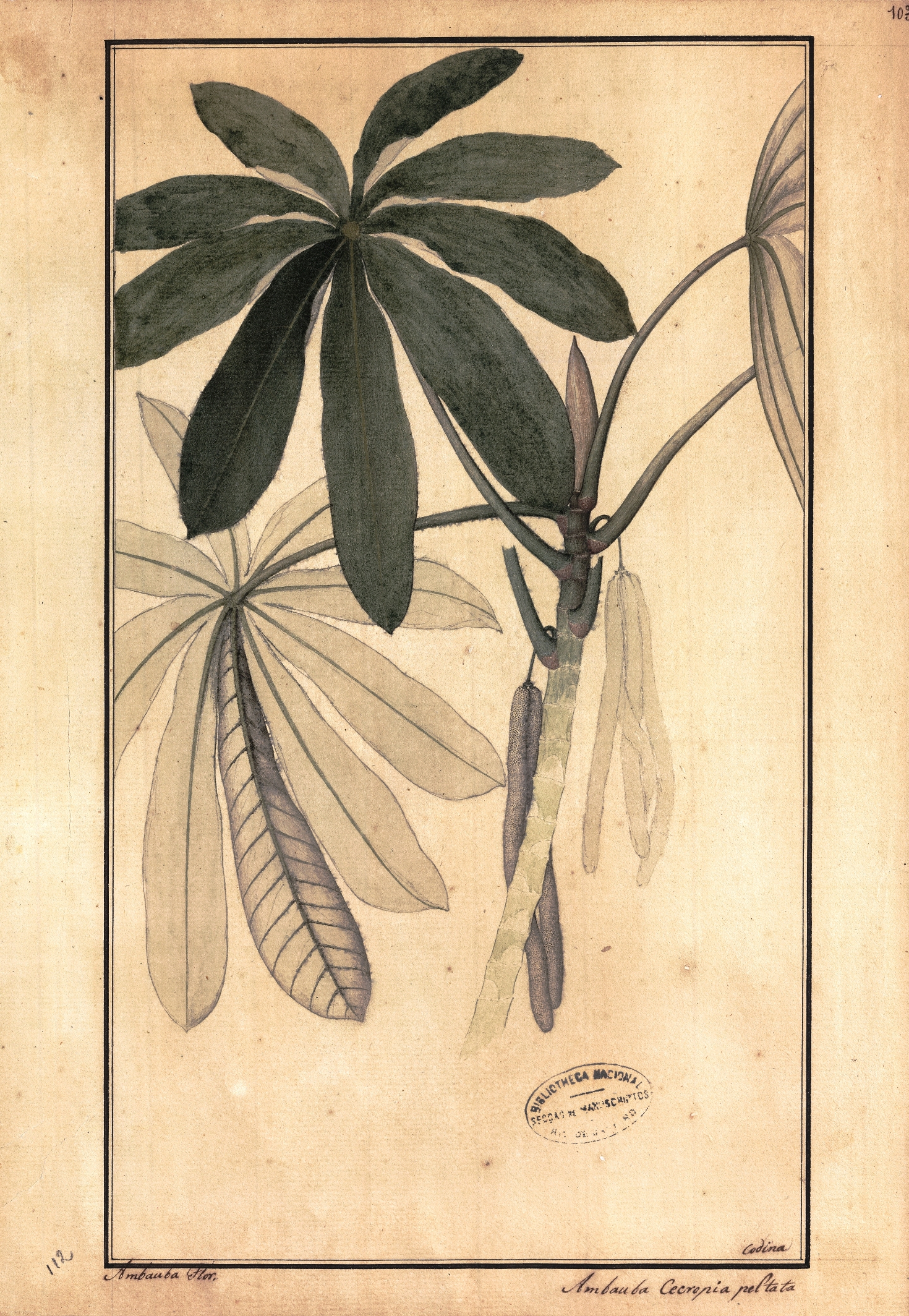 Description –
Cecropia peltata is a fast-growing tree, which normally reaches 15 meters and which can occasionally reach up to 25 meters in height, with a very open and thin crown made up of a few sturdy branches that rise high on the trunk and curve upward.
The trunk usually has a diameter of 10-30 cm, sometimes up to 50 cm, with waders or roots supporting the base which can be 1 meter high.
The leaves are large, 10–60 centimeters in length and width, but most commonly around 20 × 20 centimeters; they are divided in a webbed fashion into 7–11 (but generally 8–10) lobes. The upper surfaces of the leaves are scaly, while the lower surfaces are covered with a small down, interspersed with longer ones. The petioles are generally 20-50 centimeters long, while the branches are green and covered with short, stiff hair.
There are separate male and female plants. The male flowers, 1–1.5 millimeters long, are carried in spikes 10–60 centimeters long. The male inflorescence is enclosed in a spathe which splits and falls as the anthers mature. The female flowers are carried in paired spikes 3-5 cm long.
The fruit, about 2 millimeters long, is an achene enclosed in a fleshy coating that forms from the perianth.

Cultivation –
The Trumpet Tree is a fast-growing plant and is listed as one of the 100 worst invasive alien species in the world.
It is an evergreen tree that becomes slightly deciduous in areas with a dry season.
This plant from the humid regions of the tropics grows with an average annual rainfall that can vary from 990 – 3,990 mm or more. It needs annual average temperatures between 12 and 24 ° C.
The plant succeeds in any well-drained soil in a very sunny position or in light shade and is successful on poor and eroded soils.
The tree has been introduced to many areas outside its native range. The seeds are spread by bats and birds that feed on fruit; these germinate freely if in a sunny position and can invade the habitats of other species.
It is a fast-growing but short-lived tree, rarely living more than 20 years.
Plants grow back quickly when cut and bloom intermittently all year round.
Propagation is by seed, sowing in a sunny seedbed as soon as it is ripe. The seed usually begins to germinate within 25-40 days, although germination rates are low.
Once the young seedlings have germinated, they should be placed in single containers when they are 5-6 cm high.

Customs and Traditions –
Cecropia peltata is a multipurpose tree; it is harvested in its natural state for food, medicinal and various other uses.
It is a very good pioneer species, it is also occasionally cultivated as an ornamental in the tropics, being appreciated for its large umbrella-shaped canopy, with aesthetically beautiful leaves that are a silvery color at the bottom.
The branches and leaf petioles of Cecropia species are often hollow and can host stinging ants. The trees attract ants by producing a honey-like sap, and the ants respond by working to keep the tree free of leaf-eating pests, including humans.
The fruit is eaten raw and has a sweet and gelatinous pulp.
Young shoots are occasionally eaten.
The bark and leaves have anticoagulant, anti-inflammatory, anti-tumor, astringent, cardiotonic, diuretic, hypotensive and vasodilatory properties.
This plant is an ideal species to use in the early stages of a remediation or reforestation program. These hardy trees grow rapidly when young and can grow in poor, eroded soil while still resisting the full impact of the tropical sun. They have a shallow root system and cast only a light shade, so they don’t compete with young trees with deeper roots growing under their canopy. Over time, they will help provide the shade and organic material needed to allow these other less harsh species to survive.
The trees also benefit from the local ecology, as they continuously produce flowers and fruits which are staple food for many species of birds and mammals.
The branches and leaf petioles are hollow. They can be cut and used as torches or horns.
The Uaupe Indians of the Amazon convert the hollow stems of this tree into a very curious type of musical instrument, a kind of drum, which they call “Amboobas”. A log, 10 – 12 cm in diameter, is cut to about 1.2 meters in length, removing the partitions and smoothing the inside with fire. Then they close the lower end with beaten leaves, obtaining a hard mass with a pestle, and drill two holes towards the upper end so as to form a handle.
These rude instruments are commonly used in indigenous dances, the performer, holding on to the handle, strikes the lower extremity on the ground and moves his feet in unison with the sounds thus produced.
A rather hard fiber is also obtained from the inner bark of the young branches which is used for sacks, strong ropes and ropes.
From the trunk a latex is obtained which can be used to make a raw type of rubber.
The spongy wood ignites easily and can be used by rubbing it to start a fire.
The leaves have a rough texture and are traditionally used as a type of sandpaper to smooth the surface of pumpkin shells (Cresentia cujete) which are used to make containers, and other items.
Freshly cut, the wood is whitish or light in color, turning light brown or oatmeal in color upon exposure.
Sapwood and heartwood are not differentiated. The texture is coarse; the fiber straight or quite straight; quite bright; with no distinctive smell or taste. Wood is very light and soft, hard and strong for its weight, but perishable. When it is seasoned it is very easy to saw and work with compared to green wood. Surfaces tend to tear and blur during shaping and turning, but give good results in planing and sanding; nails easily and holds screws well; it is difficult to finish with varnish or lacquer. It is used to make boxes, crates, pulp and matches.
The wood is combined with concrete and transformed into an insulating panel. The lighter parts of this wood can be good substitutes for the heavy parts of balsa wood.
The trunk is used as a drinking trough to carry water and the soft and resistant wood of the roots resists splitting and has been used to make tool handles.

Preparation Method –
A decoction of young leaves is used to treat liver disorders and dropsy.
A tea or decoction of dried leaves, or parts of the inner bark of the stem, are used to treat hypertension, Bright’s disease, blennorrhagia, albuminuria, kidney infections, heart and nerve disease, and to promote good kidney function.
In addition, a tea made from the dried leaves is used as a treatment for back pain.
An infusion of the leaves is sometimes injected vaginally after delivery.
A hot poultice, obtained from the young shoots, is used as a dressing for ulcers, abscesses, wounds, cuts and pressure sores.
The dried leaves are smoked to relieve asthma.
The juice of the plant is used as a caustic substance to remove warts.
The sap is used to treat fresh cuts.
A decoction of the inner bark is used in the treatment of dysentery.