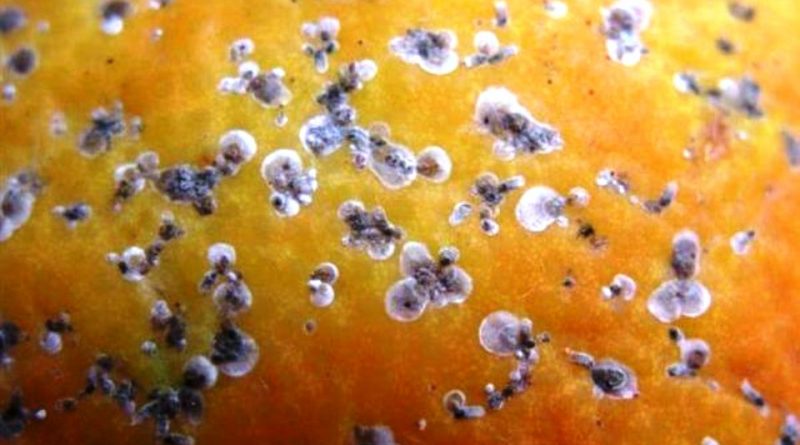 Geographic Distribution and Habitat –
Parlatoria pergandei is a polyphagous species, widespread in temperate areas and in Italy especially in the citrus-growing areas of the south, especially in Sicily, where it can cause serious damage.
The species on which it develops are mainly: Citrus, Apricot and ornamental plants.

Morphology –
The insect is recognized as the female follicle, about 2-2.5 mm in length, is oval in shape of a gray-yellowish color, with brown and eccentric exuviae.
The male follicle is instead elongated, grayish-white with a reddish-brown exuvia at the margin.

Attitude and Life Cycle –
The Parlatoria pergandei overwinters at the stage of fertilized adult female.
At the beginning of the first warmth, in the period between late winter and spring each female lays 1 or 2 dozen eggs.
The oviposition phase is scalar so that different development stages are found simultaneously on the vegetation.
This cochineal, in general, can make 3-4 generations per year.
The cochineal lives both on the branches, both on the upper page of the leaves and on the fruits, subtracting the sap, which remain speckled with light yellow areoles. In the event of significant infestations, the branches may dry out and the fruits deteriorate.

Ecological Role –
The Parlatoria pergandei is a polyphagous insect that lives on some plants on which, in case of strong infestations, it can also cause extensive desiccation and, for fruit trees, including citrus fruits, the depreciation of the fruits.
On the upper page of the leaves it is arranged mainly along the veins causing encrustations with the follicles and subtracting lymph, and on the fruits which remain speckled with light yellow areoles.
The fight against Parlatoria pergandei was once mainly of a chemical type and was carried out, however, only in the presence of strong infestations; it was directed against the nymphs and was carried out in the winter and in the summer. The intervention threshold adopted was equal to 1 adult per cm of branch and / or 2-4 weeds per fruit.
The products used were Barium Polysulphide and White Oils possibly activated with Phosphorganics, Pyrethroids, or Buprofezin (against nymphs).
Currently we are moving towards more and more principles of agroecological application where the measures must be preventive and already in the planning phase of the arboreal plants. In fact, the use of insecticides, in the long run, decompensated entomofauna, fauna and with inevitable residues on human nutrition.
The first adoption must be to avoid tree specializations, systematically interrupting the plots with other crops and hedges, avoiding the use of nitric fertilizers, which tend to soften and make the plant more palatable, and favoring the useful entomofauna with host plants composed of natural enemies of the cochineal present in the environment; these effectively control the populations of the phytophagous. Among the most important enemies are:
– the Ladybirds Exochomus quadripustulatus and Chilocorus bipustulatus;
– the Calcidoid Hymenoptera and some parasitoids.