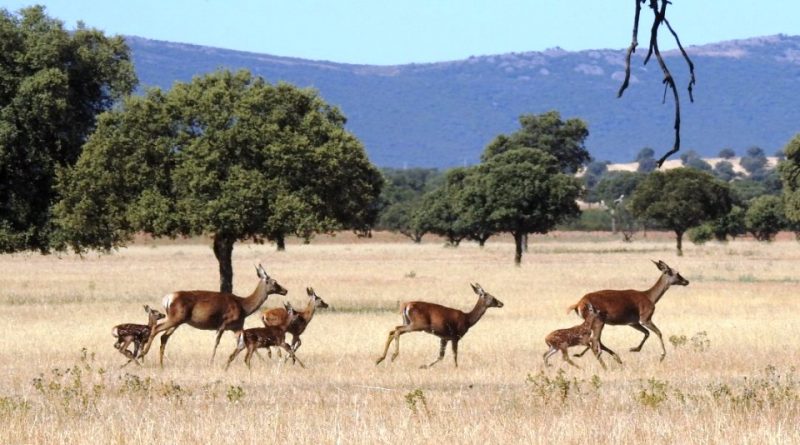 Cabañeros National Park, whose WDPA Code is: 20948, is a Spanish national park located in the autonomous community of Castile-La Mancha with the city of Toledo as its capital.
Cabañeros National Park was established in 1995 and has an area of ​​408.56 km².
The Cabañeros National Park is located, as mentioned, in the Montes de Toledo, in the autonomous community of Castile-La Mancha, north-west of the province of Ciudad Real and south-west of Toledo.
The park was established to protect a representative and well-preserved example of a Mediterranean forest. The landscape is characterized by strong contrasts and is divided into two large units, both very representative of the Montes de Toledo area: the “raña”, a vast plain of about 8,000 hectares that extends in the southwestern area of ​​the park, and the “sierra”, or the mountainous area, which occupies most of the park’s surface and whose peaks range from 650 to 1448 meters. The mountains are covered with woods and shrubs, as well as some bare stone surfaces.
The Cabañeros National Park derives its name from the huts traditionally used by the shepherds and charcoal burners of the Montes de Toledo as temporary shelters while working in the fields: these are small huts with a cone-shaped roof, built with plants that grow in the area. 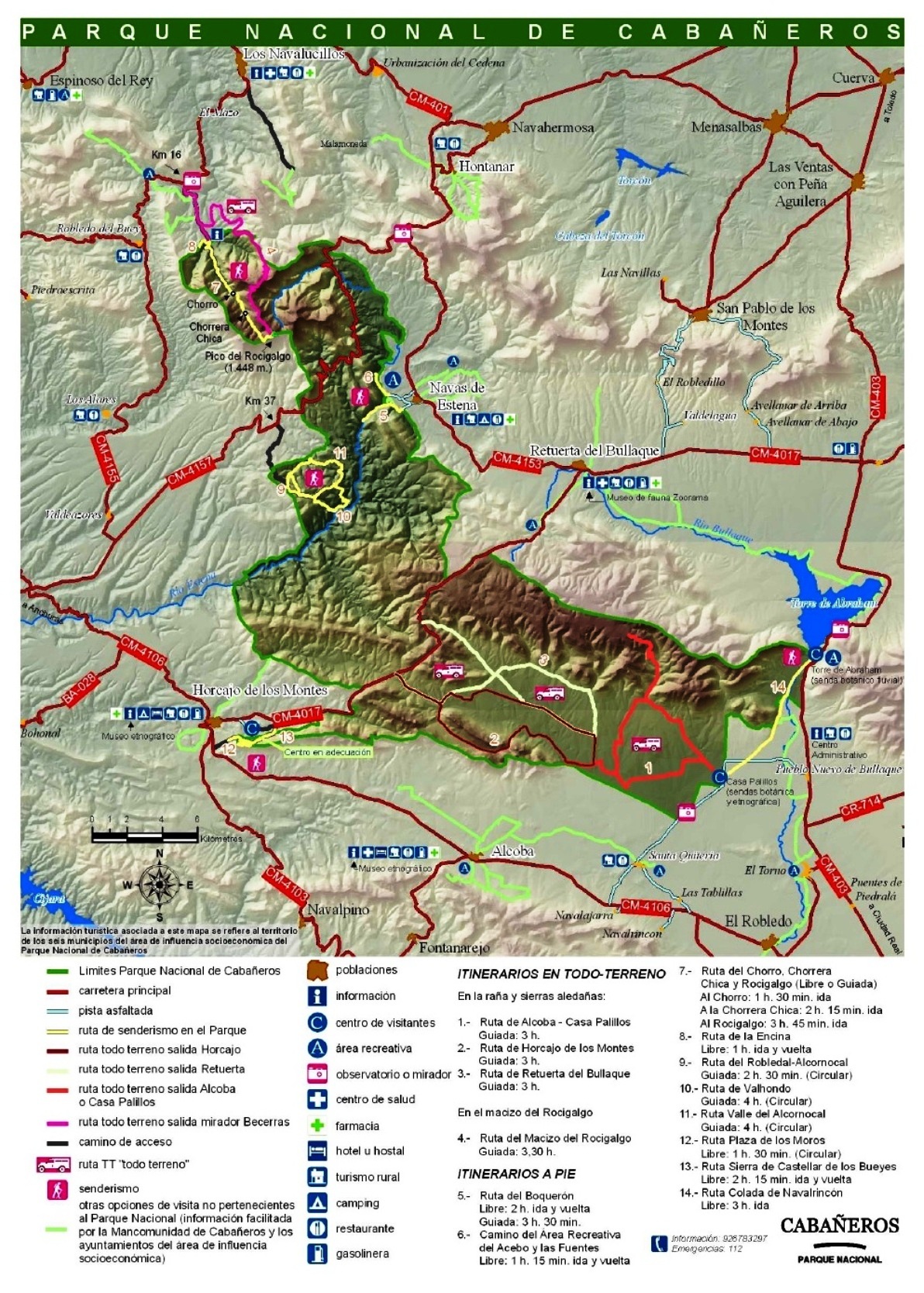 Flora –
The flora of Cabañeros is typical of the Mediterranean forest. Its extensive tree masses range from holm oaks to birches, which grow in the most humid areas.
Other large formations are the oaks, the melojares and the cork oaks.
The bushes that cover most of the mountains are made up of rock rose, heather and rosemary.
Given its wide extension it is possible to find a great variety of plant formations.
The holm oak stands out among all, which is a tree with a wide and rounded crown that can reach 25 meters.
The leaves are evergreen, dark green at the top and lighter at the bottom. They have strong thorns around them when the plant is young.
The bark is smooth and greyish green on the stems. It darkens as they grow and then splits in all directions, leaving a very dark, practically black trunk.
It blooms in the months of April or May.
Its fruits, the well-known acorns, are dark brown when ripe, shiny and with a characteristic dome that covers them for about a third of their size. They ripen from October to November and some years also in December.
Acorns, in addition to feeding livestock, are edible for humans, so they are often eaten roasted like other nuts.
Its wood is very hard, so it is used to produce parts that must withstand strong friction, such as cars, plows, parquet, tools, etc. It is also an excellent firewood for burning and for making charcoal
The bark has a large amount of tannins, which is why it is very popular in leather tanning.
Also present is the sundew; a small plant that grows in swampy moorlands, also known as traps.
It is a carnivorous plant, its leaves have a sweet, sticky liquid that attracts insects and makes them stick. When trying to detach, they generate vibrations on the leaves, the plant perceives them and the leaf begins to contract or roll to hold the insect more firmly.
It is very effective against coughs, as well as against respiratory diseases such as asthma, colds in the throat, bronchial diseases and whooping cough.
We also remember the Gallic oak; a medium-sized deciduous tree that can live between 500 and 600 years.
Its leaves are oval in shape with a serrated edge. They are dark green on the upper surface and the lower part is covered with a whitish down.
The bark is greyish-brownish in color, very rough and with superficial cracks.
It blooms between March and April and its fruits, the acorns, ripen in September.
It requires conditions similar to those of the holm oak, even if it needs slightly fresher and deeper soils.
Another typical feature of oaks are the galls produced by the bite of a small wasp on the young shoots to lay eggs. In these galls, a kind of brown ball, the larva grows and once developed it leaves the gall, emerging through a tiny hole that it makes itself.
Although oak wood is not of poor quality, it is not usually used in industry, it is used for firewood and charcoal. Its leaves and fruits serve as food for livestock.

Fauna –
The fauna of this vast protected area consists of a well-preserved population of the most representative species of the Mediterranean forest, with about two hundred species of birds and large mammals.
Within the fauna of Cabañeros, some endangered or vulnerable species can be found such as the Iberian imperial eagle, the black vulture or the threatened Iberian lynx.
Among the large mammals, deer, roe deer and wild boar stand out for their abundance.
The hare and rabbit are abundant and support a carnivore community where rabbit predators such as the bobcat or the lynx predominate.
Another interesting species is the otter which is found throughout the Estena corridor.
There is also a large group of birds, with 198 species, with the presence of 3% of globally threatened species such as the black vulture and the imperial eagle.
The community of nesting birds in the mountains stands out, such as the black stork, the Iberian imperial eagle, the golden eagle, the boot eagle and the short-pointed eagle.
Among the reptiles, however, the most threatened of Cabañeros is the European pond turtle. The leprous marsh turtle is found in the Raña streams.
The ocellated lizard occupies almost the entire park, unlike the green-black lizard, typical of the groves of mountain streams. The Iberian lizard and the long-tailed lizard are often found in hilly forest clearings.
The Cabañeros amphibian population is very interesting. The salamander, the Iberian newt and the green-black newt stand out.
Other amphibians that can be seen in the Park are the Iberian obstetric toad, the Iberian pintojo toad, the common toad and the San Antonio frog.