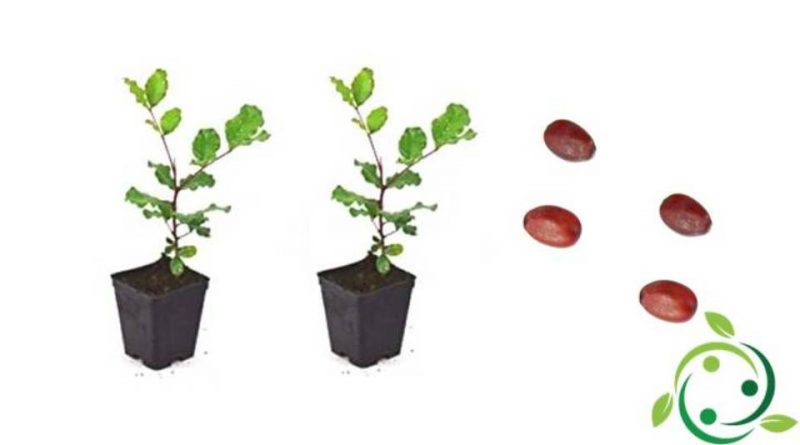 The Carob (Ceratonia siliqua L., 1753) is a plant native to the southern Mediterranean basin. Widespread in southern Italy, especially in Sicily and Sardinia. The northernmost specimens are found on the Argentario promontory (Tuscany).
The growth of the carob tree is quite slow and with a longevity of up to 500 years. This plant is mainly dioecious (that is, there are plants with only male flowers and trees with only female flowers, rarely having flowers of both sexes on the same plant).
Due to its characteristics, it is possible to have flowers, fruits and leaves on the same carob tree at the same time, being evergreen and the ripening of the fruits is very long.
The Carob, together with the Olea europaea, is a species characteristic of the phytosociological alliance Oleo-ceratonion.
Due to its characteristics it is a plant that is worth having on the farm or where a portion of land is sufficient to host it, since, over time, it will need a lot of space.
For the propagation of the carob tree, remember that this plant multiplies by seed, as the cutting does not root, the suitable period for sowing in early spring or autumn.
However, it can be multiplied by layering, an operation that must be carried out throughout the month of August.
Now let’s see the propagation by seed and the advice to follow.
The most suitable technique to make the carob germinate well is to engrave the siliqua (which is the seed of the carob tree) with a suitable tool. To this end, it can be very practical to use the shear for pruning, taking care to do this operation very carefully to avoid cutting your fingers.
This operation is the most delicate part of the whole procedure. In fact, it will be necessary to remove a part of the semen, that is a very small part of the lateral covering, trying not to damage the embryo. For clarity in the seed you will notice a round part and one where the hilum is located (the posterior scar in the center of the two depressions). You have to superficially cut one of the two depressions.

We repeat to be very careful as the shear can easily cut a finger if used superficially. I advise you to hold the seed with a small pincer or electrician’s tweezers, tight enough but without damaging it, and with the shear make the cut, in this way the fingers will be safeguarded.
You must first prepare the seedbed or small jars. It is advisable to prepare a soil consisting of two parts of sand and one part of dark peat. A short layer of perlite or coarse gravel must be placed on the bottom of the seedbed or pots to facilitate drainage.
At this point, the seeds, treated in this way, must be inserted into the earth, taking great care to keep the round part upwards and out of the earth.
It is essential that the seed is not fully covered; in fact due to the water and the delicacy of the seed it would end up rotting in an attempt to push and emerge out of the earth.
After sowing, care must be taken to irrigate little but often to avoid any possible stagnation that would end up creating rot and therefore the sterility of the germ.
If you have created a real seedbed, with many plants, we recommend that you create an irrigation system with a timer and a butterfly sprinkler. This can be adjusted at will and according to actual needs.
It is also important not to place, at least until the seedlings have reached a few cm in height under the direct rays of the sun.
Now all that remains is to wait for the seed to emit its first leaflets and start forming the seedling.
Obviously, the formation of the carob seedlings, as mentioned, is very slow and it takes many years before it becomes a tree.

One thought on “How the Carob propagates”