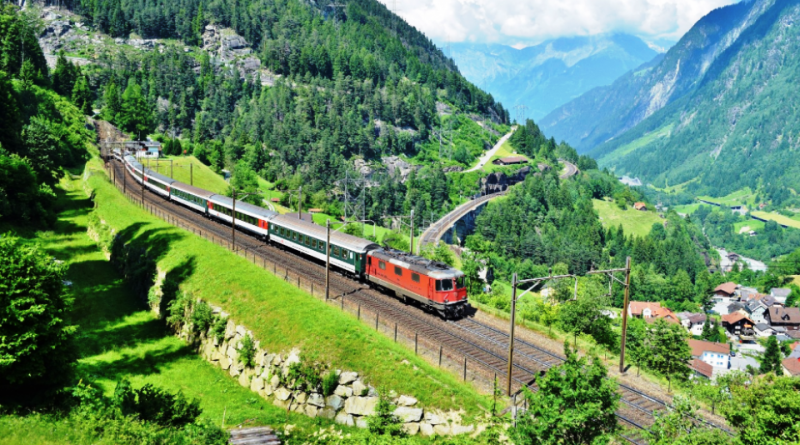 As is known, rail transport is the most energy-efficient mechanical means of transport by land. Furthermore, the smoothness of the via ferrata makes the movement more comfortable than other forms of transport by land. Generally, for the same tons (or number of passengers) transported, a train requires 50 to 70% less energy than road transport.
Rail transport is already in itself the most ecological carrier, which however still involves a production, albeit modest, of greenhouse gases. For every ton of load and for every kilometer traveled with a European freight train, an average of 29 grams of CO2 enter the atmosphere.
Furthermore, rail transport is also one of the safest. By making use of its own office, it normally does not interact with other carriers, which can happen (even if more and more rarely) only in the case of the level crossing where road and railway cross (only if a different route cannot be adopted).
We also remind you that in addition to passenger transport, rail transport plays an important role in the transfer of goods.
In this sense, the objective set by the European Commission’s White Paper provides that by 2030, on distances exceeding 300 kilometers, 30% of road transport will be transferred to rail.

European situation and its trend –
According to the latest Eurostat data available, referring to 2017, the average of the rail modal split within the EU28 is 17.3%.
The trend, however, is – even – declining considering that in 2011 it reached 18.7% and in 2016 it was 17.6. The general picture is very heterogeneous: unexpectedly Latvia is the most virtuous country: two thirds of the goods transported already travel by rail (66.7%, even if in 2011 it was 73.7%). Impressive numbers also in Estonia: 44.4%, but in 2011 it was 75.4%.
Among those that, despite the downward trend, target 30 have already achieved it, together with Switzerland (34.7%), Austria (31.8%) and Sweden (30.2%), there are also Hungary (32.4%), Romania (30.2%), Slovenia (35.5%) and Slovakia (32.9%).
Unfortunately, among the worst countries are Greece (1.8%) and Spain (5.1%). Italy is 13.6% between France (10.5%) and Germany (17.8%), even if the figure is considered inflated by Italian sector operators. In any case, even here, the trend for everyone is the decline.
To make a comparison with the situation of some countries worldwide, take into account how, for example, China is focusing on the creation of a mammoth railway system to modernize the country and create the largest world economic market that moves on the tracks and it crosses a network of 81,000 km.
In Italy, on the other hand, rail freight transport represents a minority share of traffic compared to other modes: it is estimated that it reaches a value of 6%. Even in this field, unfortunately, our country is the tail light of Europe where the rail freight sector stands at a share that varies between 12% and 18%, and in some “virtuous” countries such as Austria even exceeds 30%.
In addition, the freight transport system in Italy has always had a deep gap compared to other European countries due to the hegemony of road transport. Despite the latter having more critical aspects than the other sectors (just think of the high costs, the strong dependence on weather and road conditions, the higher accident rate and the environmental repercussions) infrastructure investments on the one hand and policies on the other, over the past sixty years they have favored the road and motorway network and the transport of goods and passengers by road.

The Italian Paradox –
This is a paradox if we consider the indisputable environmental sustainability of rail freight transport, but also the positive externalities influencing mobility, the cost of fuel, the accident in the motorway sections, up to the positive influences on the price of insurance premiums and of consumer goods. In this sense, an interesting study developed by FerCargo (Association of private railway companies operating in the freight sector that collectively collect 1,500 employees and represent 30% of the rail freight traffic), has highlighted how rail transport is the carrier more ecological. For each ton of load and for each kilometer traveled with a European freight train, in the atmosphere, against 29 grams of CO2, for transport on heavy vehicles compliant with the Euro 5 anti-pollution regulation, the relative emissions amount to 81 grams, approximately three times the previous solution.
Therefore, in Italy, in spite of the Kyoto Protocol and the recent Paris Agreements, we continued (and continue) to invest in rubber tires, causing considerable economic and environmental damage to the entire country and, all this, without particular differences in terms of Government in Government, a sign that the politics of this country is rejected for whatever color has alternated to its leadership.
North / South difference in Italy –
The numbers and statistics tell of a country where the desire for rail transport grows, but within this positive framework we find very different realities that tell incredible differences in the quality and offer of railway service between the different parts of Italy.
In some areas the service is among the most competitive in the world. Like between Florence and Bologna where the offer of trains, for quantity and speed, really has no comparison in Europe.
In fact, a real underground is in service, with 164 trains speeding at 300 km / h in both directions every day (there were 162 last year, 152 two years ago, 142 three years ago, and there were only 18 Eurostar in 2002).

Differences between North and South –
The problem of rail transport in Italy is that outside the main high-speed lines, and the regions that have invested in recent years, the situation of the service has worsened, with fewer trains in circulation, and consequently the number of people who takes the train. Only in recent years has there been a recovery in the Intercity service offer – fundamental trains in the routes outside the high-speed line, especially in the south and in the connections with the provincial capitals but from 2010 to 2017 the reduction of resources, with the extension of the contract between the Ministry of Infrastructure and Trenitalia, it led to a drastic reduction in connections that clearly emerges from the consolidated financial statements of Trenitalia. 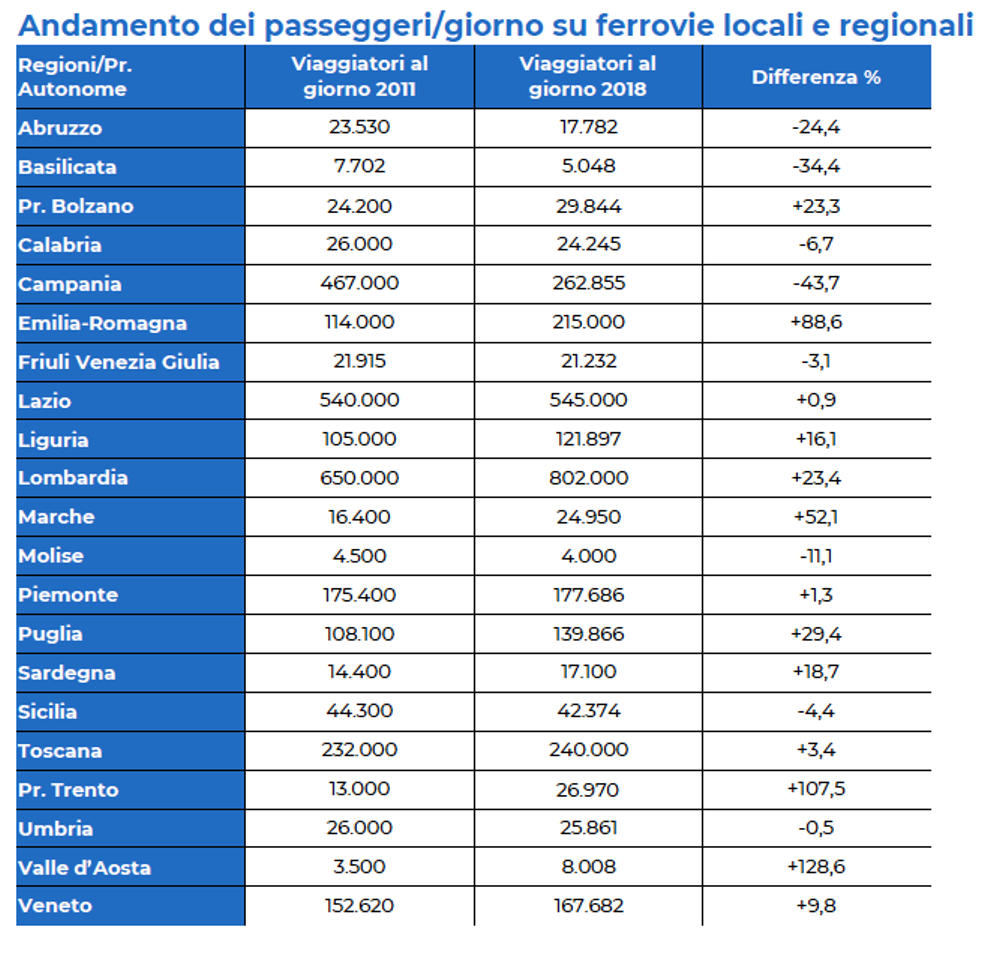 Dramatic is, in some ways, the situation especially in some Regions which, related to the number of inhabitants, not only show a number of users, at least ridiculous compared to similar Regions but also show a tendency to decrease between the data of 2011 and those of 2018; this is the case of Abruzzo, Basilicata, Calabria, Campania, Friuli Venezia Giulia, Molise, Sicily and Umbria: in short, with the exception of Friuli Venezia Giulia all regions from the center to the south. How to say a country that treats its Constitution, towards its citizens at “Two Speeds”.
Conclusions –
The conclusions of this work already lie in the data and it would not even be necessary to underline them.
The real problem is that in spite of the International Agreements and, even more so, of the equal opportunities of a country, Italy does not come out well from the point of view of its commitments in the fight against pollution and climate change nor, and this also makes us think a lot, towards its citizens of the south, who are disadvantaged twice: the first in the social field, to be disadvantaged towards the brothers of the north, the second in the environmental field because the greater load of CO2 linked to transport (81/29 grams) it’s up to them.
Italy from green politics and equal opportunities is yet to come.