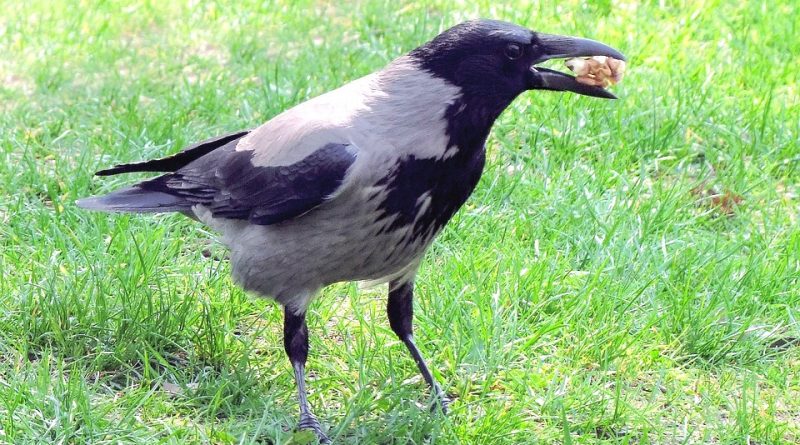 The hooded crow (Corvus cornix Linnaeus, 1758) is a bird belonging to the Corvidae family.

Systematic –
From a systematic point of view it belongs to the Eukaryota Domain, Animalia Kingdom, Sub-Kingdom Eumetazoa, Superphylum Deuterostomia, Phylum Chordata, Subphylum Vertebrata, Infraphylum Gnathostomata, Superclass Tetrapoda, Aves Class, Subclass Neornithes, Superorder Neognathae, Suborder, Order, Passe. Corvoidea, Family Corvidae and therefore to the Genus Corvus and to the Species C. cornix.
Four subspecies of this species are recognized, with the related ranges:
– Corvus cornix cornix Linnaeus, 1758; the nominal subspecies, widespread in the European portion of the range occupied by the species;
– Corvus cornix sharpii Oates, 1889; widespread east of the Urals to Enisej, as well as in the south of the Balkans, in Crete and in southern Italy;
– Corvus cornix pallescens (Madarász, 1904); widespread in the Levant;
– Corvus cornix capellanus Sclater, 1877; widespread along the Euphrates from Kirkuk to Bushehr.
According to some authors, the latter species should be classified as a separate species.

Geographical Distribution and Habitat –
The hooded crow lives in a rather vast range extending from Northern Europe (Faroe Islands, Scottish Highlands, Isle of Man, Ireland, Fennoscandia, Denmark) to Central Siberia through Eastern Europe, European Russia, the Balkans, the peninsula Italian (including islands), Turkey, the Caucasus, Central Asia (east to the western slopes of Pamir), south to the Iranian coast of the Persian Gulf, Mesopotamia and the Mediterranean coasts of the Near East and Egypt north-eastern: the species is also present in Crete, Corsica and Cyprus.
Its preferential habitat is that of areas with alternating open spaces where to look for food and tree-lined spots or isolated trees where to nest and spend the night. However, Corvus cornix has adapted very well to urbanization, colonizing rural, suburban and urban cultivated areas, showing that it does not have an absolute need for tree cover and adapting to feed on waste and leftovers and to nest on tall buildings, antennas or towers. 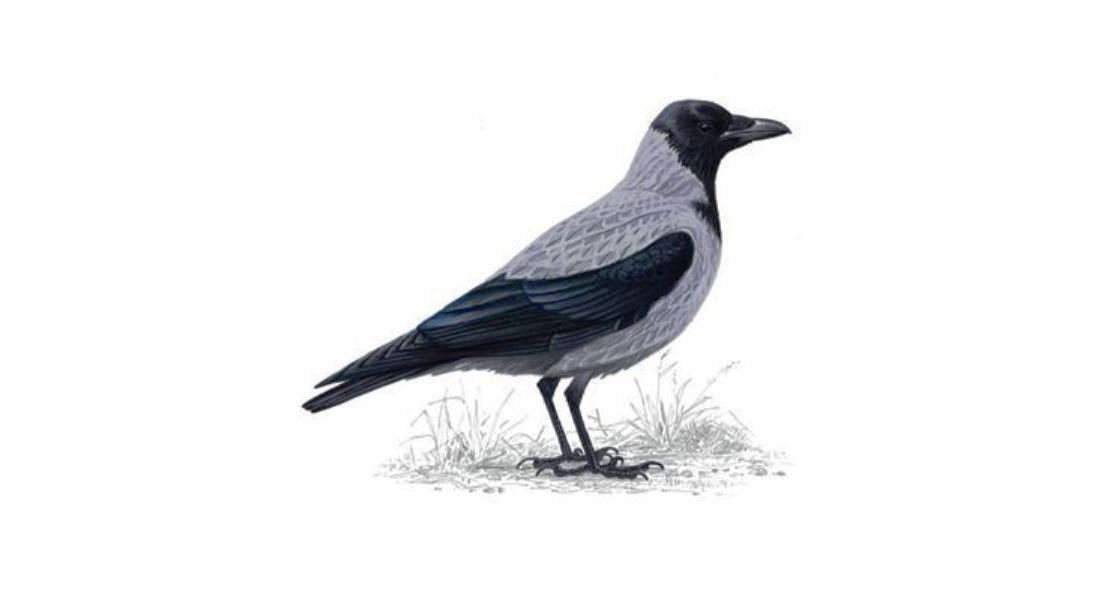 Description –
The crow is a medium-sized bird with two indistinguishable sexes, with a length of 43-52 cm, a wingspan of 92-100 cm and a weight of 360 – 370 g.
Often confused with the crow, Corvus corax, or with the black crow, Corvus corone corone, the gray crow, Corvus corone cornix, it is recognized for the intermediate size between the other two species and for the typical gray coloration of the chest and back, while wings, tail and head are black.
The head has a rounded shape with a receding forehead, a strong, conical beak with a slightly hooked tip, a robust neck, long fingered wings, strong legs and a square-shaped, medium-length tail.
The plumage is glossy black on the head, chest, wings (coverts and remiges) and tail: the rest of the wings, back, rump, undertail, sides, belly and scapular area, on the other hand, are (as can be understood from the common name ) of ash gray color. In the black areas of the body, especially on the face and chest, there are metallic reflections of green or purple color, very evident when the animal is in direct light.
The beak and legs are black: the eyes are dark brown instead.
The call of these birds consists of a harsh craaak and usually repeated three times: some calls, often those emitted from high perches, have territorial significance, such as the so-called miewing call (literally meow) emitted while the animal performs rhythmic bows of the head and of the back.

Biology –
Corvus cornix is ​​a monogamous species in which couples stay together for years, not infrequently for life.
The start of the breeding season is in the middle of March and can go to the end of May, with the populations of the colder areas (Northern Scotland, Faroe Islands, Northern Russia) starting to reproduce later, starting in May or from June, while those of the warmer areas (Persian Gulf) begin to nest already in February.
Generally there is a single brood a year, starting a second one if the first is lost for some reason during the initial stages (construction of the nest or hatching of the eggs).
Both male and female collaborate in the construction of the nest, which is usually built between the branches of a large isolated tree or on a steep rock wall, but not rarely also on a building or a human construction.
The appearance of the nest is voluminous and cup-shaped, very similar to that of the black crow and, this is made above all with twigs and vegetable fibers, taking care to line the inside with softer material: in coastal areas, inside algae and aquatic plants are added to the framework of the nest, while in urban areas the use of synthetic materials prevails for its construction: it is not uncommon for bones of small animals to be added to the external portion of the nest.
The female lays and hatches 4-6 eggs, blue in color, thickly spotted with brown and smooth and slightly shiny. The brooding lasts 18-20 days, at the end of which hatch blind chickens and implants.
The male, during hatching, stands guard near the nest, chasing away any intruders and also taking care of finding food for himself and his partner).
The nestlings are fed by the female only for the first 17-19 days of life: afterwards, both parents participate in the care and feeding of the offspring, not infrequently with the collaboration of one or more young non-reproductive of the brood of the last year. During the breeding period of the young they often frequent chicken coops to capture the chicks which represent an excellent high-protein food for the growth of their young.
The young take off after about 4-5 weeks, even if, after fledging, they continue to remain with their parents, following them in their movements, becoming part of the same flock and continuing (although more and more sporadically as they reach the maturity) to ask them the cue.
The hooded crow has a life expectancy of around 4 years, and can even reach 16 years.

Ecological Role –
The hooded crow has diurnal and gregarious life habits: the flocks, which in conditions of sufficient food availability also reach important consistency (sometimes in association with other species with similar life habits, such as the black crow and the crow) during the day they tend to split into smaller groups, which are mainly dedicated to finding food on the ground.
In the afternoon hours, on the other hand, they concentrate among the trees or raised places (such as antennas or soaring buildings), devoting themselves for a long time to socializing and playing, before retiring among the vegetation or in more secluded places to spend the night sheltered from the elements and from any predators.
From the point of view of nutrition, Corvus cornix is ​​omnivorous and opportunistic, with a predominance of the saprophagous component of the diet. It feeds on a great variety of foods, especially of animal origin, but sporadically also vegetable: moreover, with the increasing urbanization of their range, thanks to their great versatility and intelligence they have benefited greatly from the exponential increase in the availability of food, in the form of waste and scraps.
They can also attack other birds, especially in inhabited areas, such as pigeons, sometimes even larger than they are, with which they feed by keeping them under their paws and making them in tatters; they often attack cats and sometimes dogs; sometimes they attack passers-by who occasionally pass through the territory of their nest during the reproductive period, and it has also happened that they sneaked into homes to steal food.
In their habitat it often frequents the cliffs and coastal areas to find food in the form of molluscs and crustaceans hidden under the sand or in tide pools, where they also find trapped fish and echinoderms.
Animals equipped with shells or exoskeletons are brought up and dropped into the rocks. Furthermore, among the rocks, the crows find eggs and nestlings of the species that nest there (seagulls, guillemots, cormorants and procellaries), waiting for the parents to move away (or being chased specifically, thus leaving the nest uncovered) to feed on them.
Furthermore, in the diet of this bird, everything it encounters during its hunting in search of food, such as: eggs and nestlings of small and large birds, mice, small reptiles, amphibians, insects and other invertebrates (as well as their larvae) and , albeit sporadically, seeds and grains, berries and ripe fruit.
They also consume large consumers of carcasses, from which they feed both pieces of meat and insects and saprophage larvae.
This bird, similar to other corvids, has a tendency to hide excess food (such as meat or nuts) in various hiding places.
Finally, according to the IUCN, the estimated Italian population is 110,000-520,000 couples and is considered stable (BirdLife International 2004).