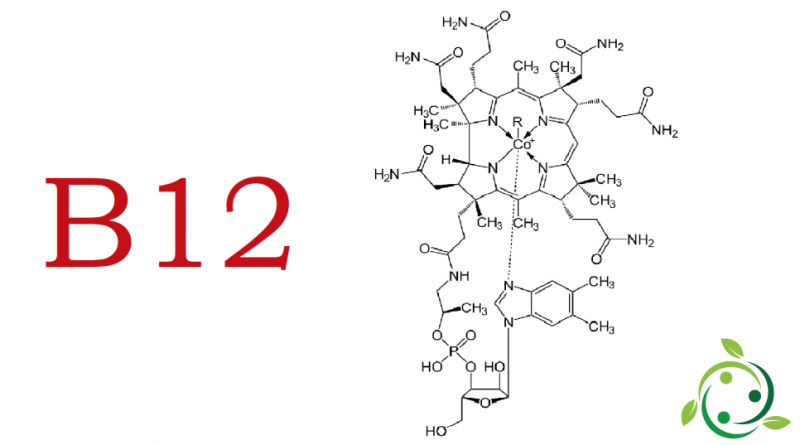 Cobalamin or Vitamin B12, whose term in the IUPAC nomenclature is: α- (5,6-dimethylbenzimidazolyl) cobamidcyanide is a substance with a brute or molecular formula: C63H88CoN14O14P.
Cobalamin was isolated and characterized following a series of research on pernicious anemia. In 1926 it was discovered that in the liver there is a factor capable of curing this pathology and it was isolated and crystallized in 1948. The structure of vitamin B12 was then clarified later in 1956.
From the physical point of view, cobalamin is a red, crystalline, hygroscopic, photosensitive and highly soluble in water substance.
From a chemical point of view it is formed by a corrinic ring (composed of 4 pyrrolic rings and three metinic bridges) with a cobalt atom in the center coordinated by four nitrogen atoms. Cobalt also has two coordination bonds perpendicular to the plane of the ring. The first of them is established with a molecule of 5,6 dimethylbenzimidazole linked, in turn, to a ribose 3-phosphate. The second link is established with different functional groups (-R) which can be:
– cyanide -CN (cyanocobalamin);
– hydroxyl -OH (hydroxocobalamin);
– methyl -CH3 (methylcobalamin);
– 5-deoxydenosylcobalamin (5′-deoxydenosylcobalamin).
The metabolically active forms are methyl- and 5′-deoxyadenosylcobalamin. Cyanocobalamin is an artifact that is formed during extraction processes as papain is used, a protease that is activated by the addition of CN-.
Hydroxocobalamin is the natural form in which the vitamin is usually taken.
Cobalamin is part of the so-called water-soluble vitamins, those that cannot be accumulated in the body, but must be regularly taken through food; it also does not suffer the influence of heat.
Vitamin B12, or cobalamin, is present in all foods of animal origin, albeit in minimal quantities. In particular, it is found in meat, fish, liver, milk, eggs.
In particular, the foods that contain the most are liver, molluscs and some types of fish. For this reason, those who choose a completely vegan diet are strongly advised to use vitamin B12 supplements, or to take products such as soy milk, burgers and vegetable yogurts (in some of these products it is written on the package if they contain B12 in addition.).

In nature, there are no plants or plants that contain quantities of vitamin B12 that can meet human needs. For this reason, those who feed only on foods of vegetable origin run the risk of health due to a deficiency of this vitamin.
Some algae, brewer’s yeast, some unwashed foods and others of oriental origin such as tempeh (derived from soybeans) and Kombucha (Chinese tea), although vegetable, contain vitamin B12 but in infinitesimal portions, useless for the human needs, since they are not assimilable by our body.
In nature, the synthesis of vitamin B12 occurs only by microorganisms (some archaea and bacteria). Cyanobacteria improperly called blue algae (spirulina, klamath) instead produce inactive analogues (pseudo B12), while certain algae acquire vitamin B12 from the symbiotic relationship with bacteria. In the human intestine, cobalamin-synthesizing bacteria exist. These bacteria are located in areas where the intrinsic factor does not arrive so the absorption of the latter is negligible, but not zero.
Vitamin B12 is involved in the metabolism of amino acids, nucleic acids – like folic acid helps the synthesis of DNA and RNA – and in fatty acids. It plays a fundamental role in the production of red blood cells and in the formation of the bone marrow.
On average, the daily requirement of vitamin B12 corresponds to about 2-2.4 mcg, an amount usually taken by following a normal diet. However, pregnant women must take an almost double quantity, so as to supply the correct quantity to the fetus.
Generally it is difficult to record a situation of vitamin B12 deficiency, but a condition of this type can occur in the cases of people who follow a very strict vegetarian diet, or when the absorption mechanism does not work well in the intestine.
The consequences of vitamin B12 deficiency are disorders of the nervous system and a form of anemia called “pernicious”, resulting from poor production of blood cells. Vitamin B12 deficiency is to be avoided in pregnant women, to avoid harmful consequences for the unborn child.
In case of excess of vitamin B12 this is excreted in the urine. In rare cases, however, situations of overdose of this vitamin can occur, with symptoms ranging from tremor to swelling, from excessive nervousness to allergic reactions up to an accelerated heart beat.
An excess of vitamin B12 in the blood, even in this case a rare situation, can cause kidney problems.