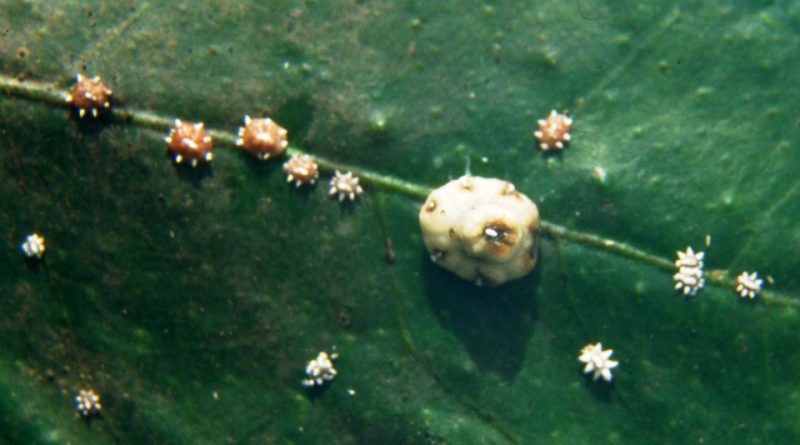 The cochineal helmet of citrus or Chinese ceroplaste (Ceroplastes sinensis Del Guercio, 1900) is an insect belonging to the Coccidae family.

Geographical Distribution and Habitat –
Ceroplastes sinensis is an insect widespread in a vast range that goes from South America, Australia, the countries of the Mediterranean basin, to southern France.
In Italy it is present, as well as in Liguria, where the species was found for the first time between 1890 and 1900, in the central and southern regions, in Sicily and Sardinia.
It is a polyphagous species that hosts citrus fruits (orange, mandarin, lemon, etc.) and various spontaneous and ornamental plants (Holly, Evonimo, Platano, etc.) and herbaceous (Chrysanthemum, Margherita, etc.), as well as fruit bearing such as Pear, Apricot, etc.

Morphology –
The adult female of the Ceroplastes sinensis measures about 6-7 mm in length and has the body protected by 7 waxy plates, one of which, the central one, is pinkish-white in color. The back plate has two umbilical depressions, while all the others have only one central depression. From these, except for anal depression, a lump of white wax comes out.
The male measures approximately 1.5 mm in length, is reddish brown in color, has wings and has a coating consisting of 13 waxy, conical, white rays; it flickers from elliptic white follicles, about 2mm long and decorated with waxy rays.
The nymphs measure approximately 0.5-1 mm and are reddish in color.

Aptitude and biological cycle –
The citrus helmet cochineal makes only one generation per year. It hibernates as an immature adult female or as a third age neanid on branches.
In addition, they can overwinter, like nymphs, even that part of males not flickered in autumn that flicker at the end of winter.
The spawning begins from the second decade of June (Sicily) and then continues throughout July and August. Typically each female lays around 2,000 eggs, which are pinkish in color, accumulated under her own body.
After a period of mobility, the nymphs fix themselves on the upper page of the leaves, along the median rib, then move on to the lower one and transfer to the twigs as autumn approaches. In mid-autumn there are immature females who winter in this condition.
The attack causes deterioration of the plant and, in cases of heavy infestations, it can also cause its death; in any case the presence of fumaggini, which is formed on sugary manure, considerably depreciates the product.

Ecological role –
In the presence of considerable quantities of Ceroplastes sinensis, damage to plants can occur which occurs on the leaves and twigs and is determined by trophic bites and honeydew production; a substantial presence of fumaggini develops on the honeydew. The attack causes deterioration of the plants which can cause the death of the same or, in any case, the depreciation of the fruits.
This coccyx is limited by many natural enemies such as:
– Predators: Chilocorus bipustulatus and Exocomus quadripustulatus (Coleoptera: Coccinellidae); Eublemma scitula (Lepidoptera: Noctuidae);
– Parasitoids: Tetrastichus ceroplastophilus (Hymenoptera Calcidoidei Eulofide); Coccophagus sp. (Hymenoptera Calcidoidei Aphelinidae) Scutellista cyanea (Hymenoptera: Encyrtidae) predator oophagus but also parasitoid ectophagus of young females.
It is important, in the Ceroplastes sinensis containment program, to safeguard the populations of predatory or parasitoid insects, as well as pollinators and entomofauna present on the site.
It is important that the plants are not grown in excessive specialization, that there is an interruption with other species of the various plots, that, where possible, the grassing of the fields is provided and that the use of nitric fertilizers is avoided.
If necessary, during the summer, corresponding to that of maximum opening of the nymphs, it is possible to intervene with white oil with the addition of Marseille soap.
The specific chemical control is carried out only in the case of particularly dangerous infestations with thresholds of 3-5 nymphs per leaf; treatments must be performed against young nymphs, as adults are not very vulnerable because they are protected from waxy formations and from a thickened body (females).
In the past, phosphorganics were used, which are instead to be banned for their devastating collateral effects on entomofauna and fauna.

One thought on “Ceroplastes sinensis”