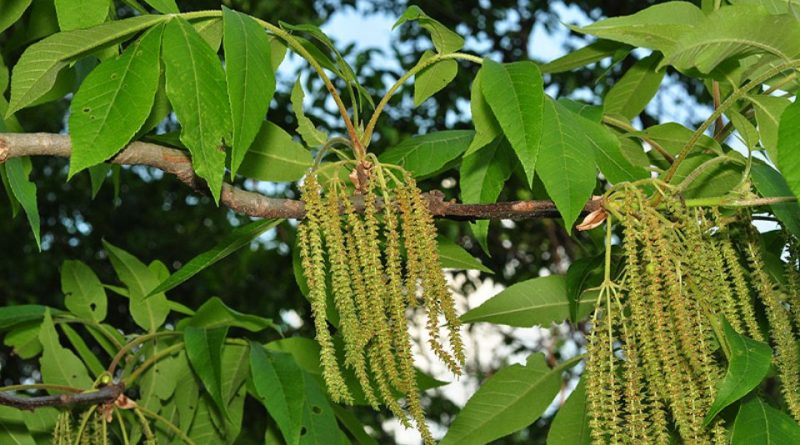 The mockernut hickory (Carya tomentosa Sarg.) Is an arboreal species belonging to the Juglandaceae family.

Systematic –
From a systematic point of view it belongs to the Eukaryota Domain, the Plantae Kingdom, the Magnoliophyta Division, the Magnoliopsida Class, the Fagales Order, the Juglandaceae Family and therefore to the Genus Carya and to the Species C. tomentosa.
The terms are synonymous:
– Carya alba L.
– Juglans tomentosa Michx ..

Etymology –
The term Carya comes from the Greek κᾰρύα carya used for the walnut Juglans regia (the fruits of which were called κάρυον cáryon).
The specific tomentose epithet comes from toméntum peluria: covered with hair.

Geographical Distribution and Habitat –
Carya tomentosa is a fairly common plant in the eastern half of the United States; it grows from Massachusetts and New York in the west to southern Ontario, southern Michigan and northern Illinois; we find it in southeastern Iowa, Missouri and eastern Kansas, southeastern Texas and east north of Florida. This species is not present in New Hampshire and Vermont as previously mapped by Little. It is most abundant southward through Virginia, North Carolina and Florida. It is also abundant in the lower Mississippi valley and grows larger in the lower Ohio River basin and in Missouri and Arkansas.
The climate in which this plant grows is generally humid. In its habitat, the average annual rainfall ranges from 890 mm in the north to 2,030 mm in the south. During the growing season (April to September), annual rainfall varies from 510 to 890 mm. About 200 cm of annual snowfall is common in the northern part of the range, but snow is rare in the southern part.
Annual temperatures vary from 10 to 21 ° C, while average monthly temperatures vary from 21 to 27 ° C in July and from -7 to 16 ° C in January. The extremes of temperature are well above 38 ° C and below -18 ° C. The growing season is around 160 days in the northern part of the range and up to 320 days in the southern part of its natural territory. 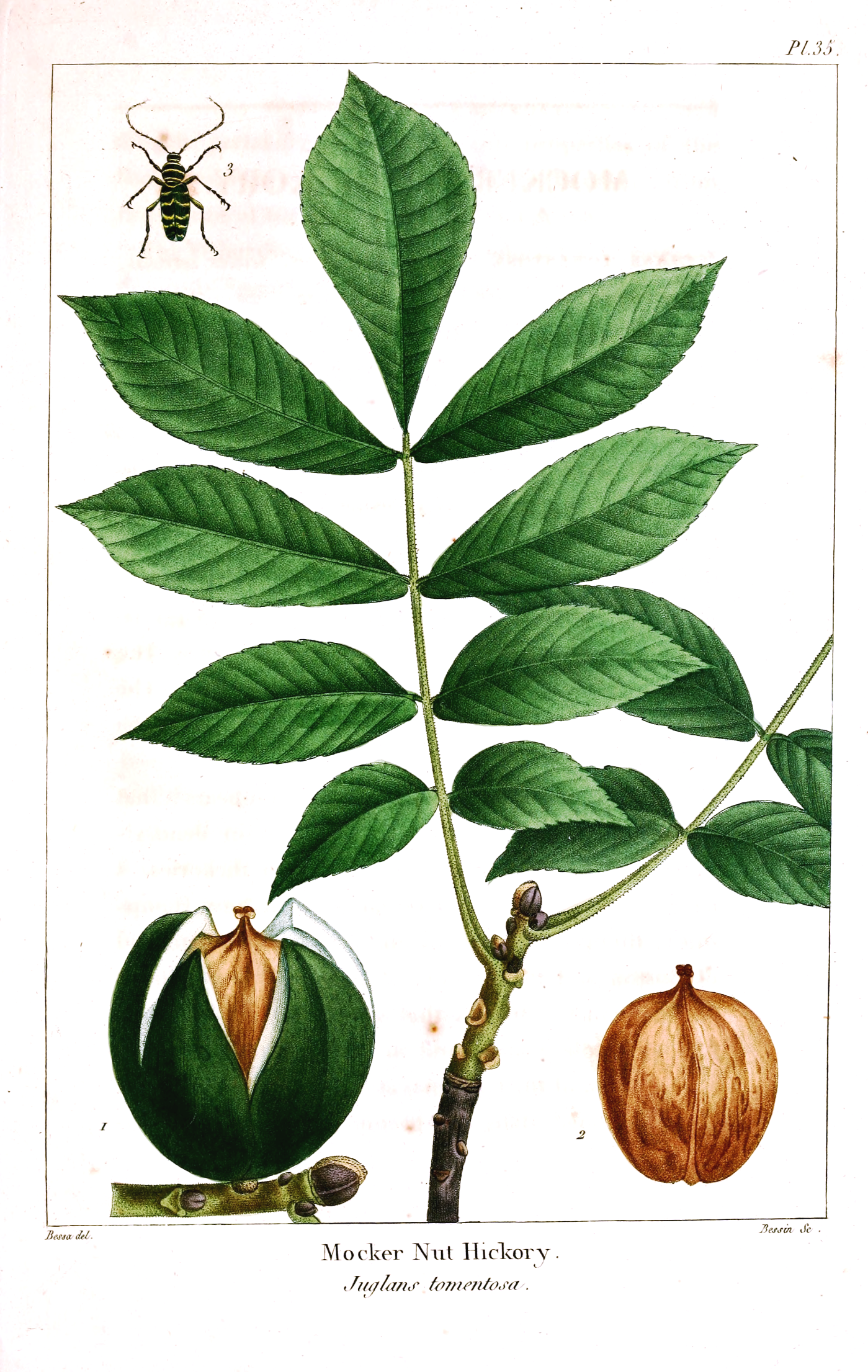 Description –
Carya tomentosa is a medium-large deciduous tree, which grows between 15 and 30 meters in height, with a straight trunk and a rounded crown. The thin dark gray bark develops furrows and flattened edges as it matures.
The leaves are composed, odd-pinnate, dark yellowish green in color and have 5-7 ovate-lanceolate toothed leaves.
The lower parts of each leaflet are fluffy and glandular. The spine is petiole and they are pubescent. The leaflets are aromatic if cut or bruised. The leaves turn yellow in autumn.
White Hickory is a monoecious plant, with male and female flowers that are produced on the same tree. Male flowers are about 10-13 cm long and can be produced on branches, the axils of leaves from the previous season or at the base of the internal scales of the terminal buds that are formed in the year. Female flowers appear on short spikes on the shoots of the current year. The flowers bloom in spring from April to May, depending on latitude and weather. Usually male flowers emerge before female flowers. This tree produces large quantities of pollen which is dispersed by the wind.
Female flowers give way to fruits (rounded nuts), but only after the tree reaches around 25 years old.
The fruits are solitary or coupled and globular; they ripen from September to October and are about 2.5 to 9.0 cm long with a short neck-like base. They have a four-ribbed thick skin of 3-4 mm thick which usually divides from the center to the base. The four-angle shell is very hard reddish-brown and 5 to 6 mm thick which contains a small edible kernel.
The seed is dispersed from September to December. Carya tomentosa requires a minimum of 25 years to reach the fertile commercial age. The optimal seed production takes place from 40 to 125 years and the maximum age indicated for commercial seed production is 200 years.

Cultivation –
Mockernut hickory is a tree that grows quite slowly and takes, as mentioned, 25 years before producing edible nuts, but can continue to produce for 200 years.
This tree prefers moist, rich, medium humidity soils, well drained in full sun or partial shade. Plants are generally intolerant of shade. In order to grow, this tree needs a large space and is difficult to transplant because of its long taproot.

Uses and Traditions –
Carya tomentosa is a long-lasting tree, sometimes reaching the age of 500. A high percentage of its wood is used for products where strength, hardness and flexibility are needed. The wood is resistant and has been used in the past for poles, yokes, wheels, handles, stairs and furniture.
Wood also produces excellent fuel.
It is used in large gardens or parks as a shade tree.
This plant has a good ability to reject from logs after cutting or after fires. As the strains increase in size, the number of shoots producing shoots decreases; age is probably directly related to the size of the stump and germination.
With this tree you can make a good management of a coppice.
Carya tomentosa is a tree preferred by wildlife, especially squirrels, which eat green walnuts. Black bears, foxes, rabbits, beavers and mice feed on nuts and sometimes bark. White-tailed deer leaf through foliage and twigs and also feed on nuts. Walnuts are a minor source of food also for ducks, quails and turkeys.
In addition, this tree also provides cavities in which animals can live, such as spikes, snakes, raccoons, and others. They are also good nesting trees that provide good coverage for birds with their thick foliage. The animals help disperse the seeds so that new trees can grow elsewhere. Especially squirrels and birds are the best seed carriers.
Some mushrooms grow on the roots of Carya tomentosa by sharing nutrients from the soil.

Method of Preparation –
The fruits and wood of this plant are used and although the nuts are edible, they are rarely eaten by humans because of their size and because they are eaten by squirrels and other wild animals.