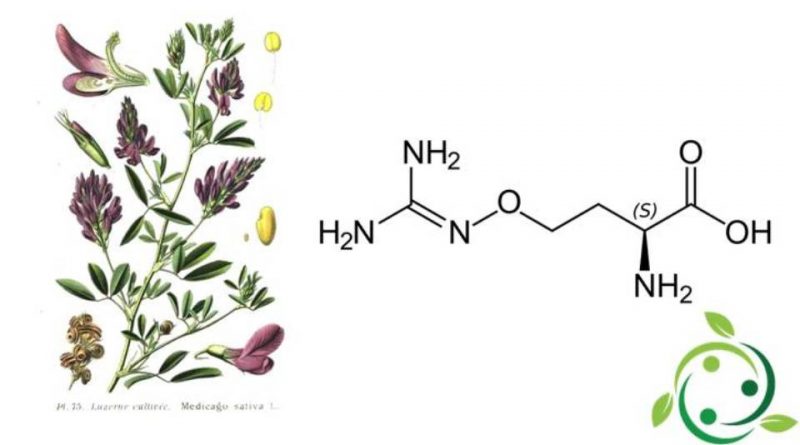 Canavanine whose term in the IUPAC official nomenclature is: (2S) -2-amino-4 – {[(diaminomethylidene) amino] oss} butanoic acid, is an amino acid contained in certain legumes and structurally similar to arginine.
Canavanine (L – (+) – (S)) has a brute or molecular formula: C5H12N4O3.
This non-proteinogenic amino acid is present in some leguminous plants such as in Canavalia (Canavalia ensiformis L.).
Canavanine accumulates mainly in the seeds of the organisms that produce it, where it serves both as a highly deleterious defensive compound against herbivores and as a vital source of nitrogen for the growing embryo.

The mechanism of canavanine toxicity is that the organisms that consume it generally mistakenly incorporate it into their proteins instead of L-arginine, thus producing structurally aberrant proteins that may not function properly.
In addition, the toxicity of canavanine can increase in conditions of protein deficiency.
Some specialized herbivores tolerate L-canavanine either because they metabolize it efficiently or because they avoid its incorporation in the formation of their proteins.
Alfalfa seeds and sprouts contain L-canavanine. L-canavanine in Alfalfa (Medicago sativa L.) has been linked to lupus-like symptoms in primates, including humans, and other autoimmune diseases.
Usually just stopping consumption to reverse the problem.