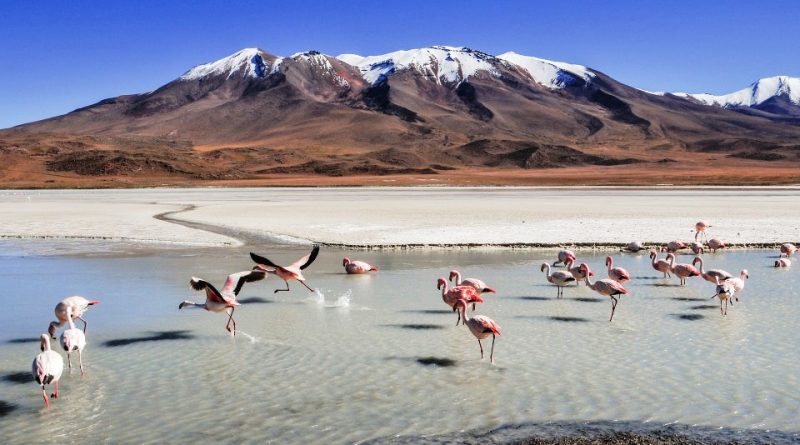 Bolivia is a state in South America located in the center of the subcontinent. It is a state with an area of ​​1,098,581 km².
Bolivia, according to the 2012 census, had 10,027,254 inhabitants.
This country, between the Tropic of Capricorn and the 10th parallel S, is bordered to the north, north-east and east by Brazil, north-west with Peru, south with Argentina, south-east with Paraguay and to the southwest with Chile.
Bolivia’s capitals are two: the legislative one is Sucre and the governmental one La Paz, although the largest and most populous city is Santa Cruz de la Sierra.
Bolivia is a landlocked state, in 2010 it entered into an agreement with neighboring Peru, thanks to which it obtained the use of the port of Ilo for 99 years.
Bolivia in the early 21st century is a medium-income state; since the election of Evo Morales as head of state and government, the economy of the Andean country has clearly grown with average growth rates of 5% (one of the highest in the region) and with a reduction in poverty from 38% to 18%.

Geography –
From a geographical point of view, Bolivia can be divided into two large geographical areas:
– the eastern tropical lands, which comprise two thirds of the country, divided between the Amazon basin and the chaco area;
– the Andes, which cover the other third of the country, in the western part, consisting of both the mountain range and the plateau.
The tropical lowlands are tributaries of the Amazon River and the Río de la Plata. This huge extension of more than 700,000 km² is covered by rain, wet, monsoon and dry tropical forests. In addition, Bolivia has the world’s largest dry tropical forest in the Chaco region.
About 250,000 km² of territory are alluvial savannas, marshes and dry savannas. There are also large Amazonian lakes, which are the largest in the region.
As for the Andean area of ​​the country, this is located in the western part and is characterized by a plateau bordered by two mountain ranges: the Cordillera Occidental next to the Oriental one.
The peaks above 6,000 meters are several: the highest are the Sajama (6,542 m), the Illampu (6,421 m) and the Illimani (6,402 m).
As for hydrography, with the exception of the endorheic basin made up of Desaguadero, which connects Lake Titicaca to Lake Poopó, most of the territory is a tributary to the hydrographic system of the Amazon river and, to a lesser extent, the Rio della Plata.
The most important water catchment area is that of the Mamoré river, which covers, with the Iténez which marks the border with Brazil, about 600 000 km². Meeting in the north of Bolivia with the Beni, it forms the main branch of origin of Madeira, which constitutes one of the main tributaries of the Amazon River (10% of the total flow). The whole course of the Mamoré is navigable, together with part of the Iténez, Beni, Madre de Dios and Ichilo. In the southern area the most important watercourse is the Pilcomayo which pays, after a long course, in the Paraguay river and then in the Rio della Plata. 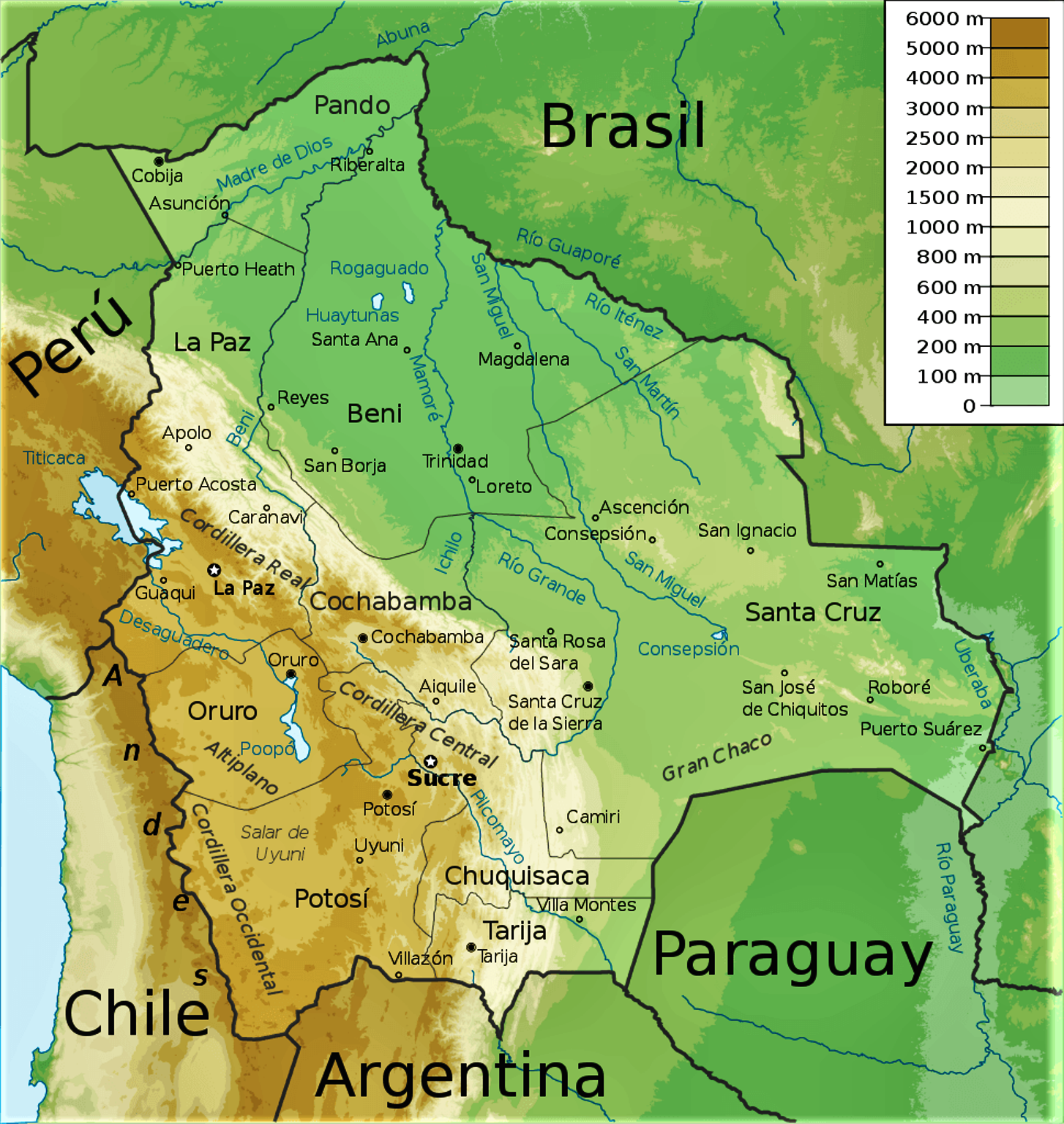 Climate –
Due to the morphology of the territory and the large occupied latitudinal space, Bolivia has one of the greatest climatic diversities on Earth, which allows a very wide spectrum of cultivable species, both typical of continental and temperate climates, such as potatoes or oats , of Mediterranean climates, such as vines and olives, and tropical climates, such as cocoa and banana.
In the Andean plateau, rainfall does not exceed 500 mm per year in the humid belt of the northern sector and the average annual temperature is below 10 ° C. The southern sector is drier and tending towards desert formation.
The tropical lands of the Bolivian east are characterized by two main climates. North of the parallel 18 ° S, the climate is properly Amazonian, with a short dry season and temperatures varying between 22 and 26 ° C on average and rainfall between 1,000 and 3,000 mm / year. The sector south of the parallel 18 ° S has a milder and drier climate, with average temperatures between 20 and 22 ° C and rainfall between 500 and 1,000 mm / year. In this sector there are the greatest temperature ranges of the Bolivian tropic, with maximums above 35 ° C and minimums even below 0 ° C. The rainiest sector, and among those with the greatest rainfall in the Amazon basin, is the Preandina belt, 180–700 m a.s.l., between the departments of Santa Cruz, Cochabamba, Beni and La Paz. Precipitation ranges from 2,500 to 5,000 mm / year, but in some sectors they exceed 6,000 mm per year.
As regards the safeguarding of biodiversity, it is emphasized that even if 22.5% of the territory is partially protected, human activity has had and continues to have a major impact on Bolivia’s natural ecosystems. In historical times, the isolated forests of the Andes, mainly composed of an evergreen species of the genus Polylepis (locally known as queñua) were almost totally destroyed for civilian uses (wood and construction).
In tropical areas the natural environments had been preserved almost intact until the mid-twentieth century. The effects on the ecosystems of the high population density during the development of the hydraulic culture of las Lomas are only conceivable since the macroclimatic modifications of the thirteenth century decimated those populations by obliging them to semi-nomadism. During the boom of the exploitation of rubber, in the forests of northern Bolivia, in the current departments of Beni and Pando, between the end of the nineteenth century and the beginning of the twentieth century, there were locally negative effects on the fauna which, however, was restored once the economic boom of extraction has ceased.
However, Bolivia is still a country with great biodiversity. While still considerable research margins remain, around 25,000 species of plants, 1,400 of birds, 550 of fish, 325 of mammals, 260 of reptiles and almost 200 of amphibians have been classified in Bolivia.
This enormous biological diversity is, however, in some cases, as for other countries in the Amazon basin, strongly threatened. The most threatened natural ecosystems are those of tropical forests, which have undergone a significant reduction both in terms of extension and biological value.
It can be estimated that 700,000 hectares of forests are destroyed annually. This figure has been growing steadily for the past 20 years and sharply increasing in the past 5 years. The main reasons for this threat are concomitant phenomena: expansion of the agricultural frontier, agro-industry, timber enterprises, hunting and subsistence.

Flora –
Among the plants that most characterize the Bolivian flora there is coca, considered by this people to be a true identity symbol. An inseparable element of daily life for the Andean peoples, so much so that it has become a powerful symbol of cultural identity and an integral part of any social exchange.
In the Valles secos interandine area there are numerous species of cactus present, some of which are endemic, such as the hulala.
The toborochi is a plant with an unusual shape typical of Chaco, now also exported here as an ornamental plant.

Fauna –
Typical animal found in these territories, as well as in other Latin American countries, the capybara, the largest rodent in the world.
Among the endemic species of Bolivia we find: the Callicebus aureipalatii, type of monkey discovered during an expedition and whose name, in Latin, means “of the golden palace”.
We also remember the Aceramarca opossum gracile, a mammal in serious danger of extinction while the animal emblem of Bolivia is the Lama, a camelid very common in Latin America.