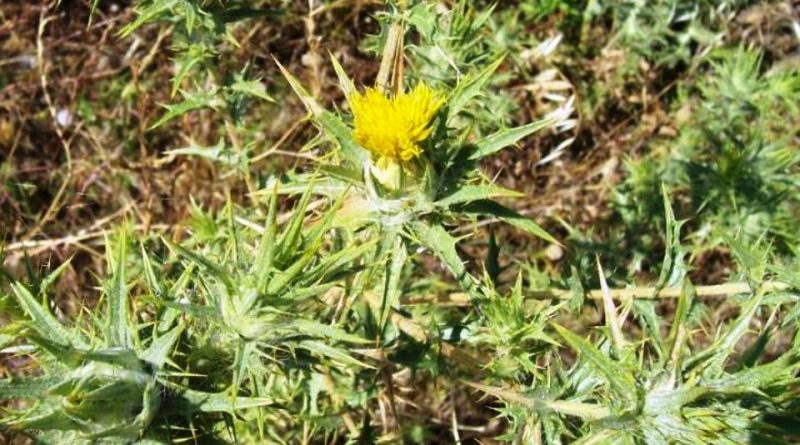 The Downy Safflower (Carthamus lanatus L., 1753) is a perennial herbaceous species belonging to the Asteraceae family.

Geographical Distribution and Habitat –
Downy Safflower is a species with a Euro-Mediterranean distribution.
In Italy it is present in almost all regions of Italy except in Val d’Aosta and Lombardy.
It is a species linked to pastoralism and once much more widespread, which grows at the edge of the rocky moors, in arid meadows, uncultivated areas, vineyards and olive groves, fences, field edges, loose and sandy soils but also in ruderal environments such as landfills and road edges, often with other thorny plants, from sea level to around 1300 m. 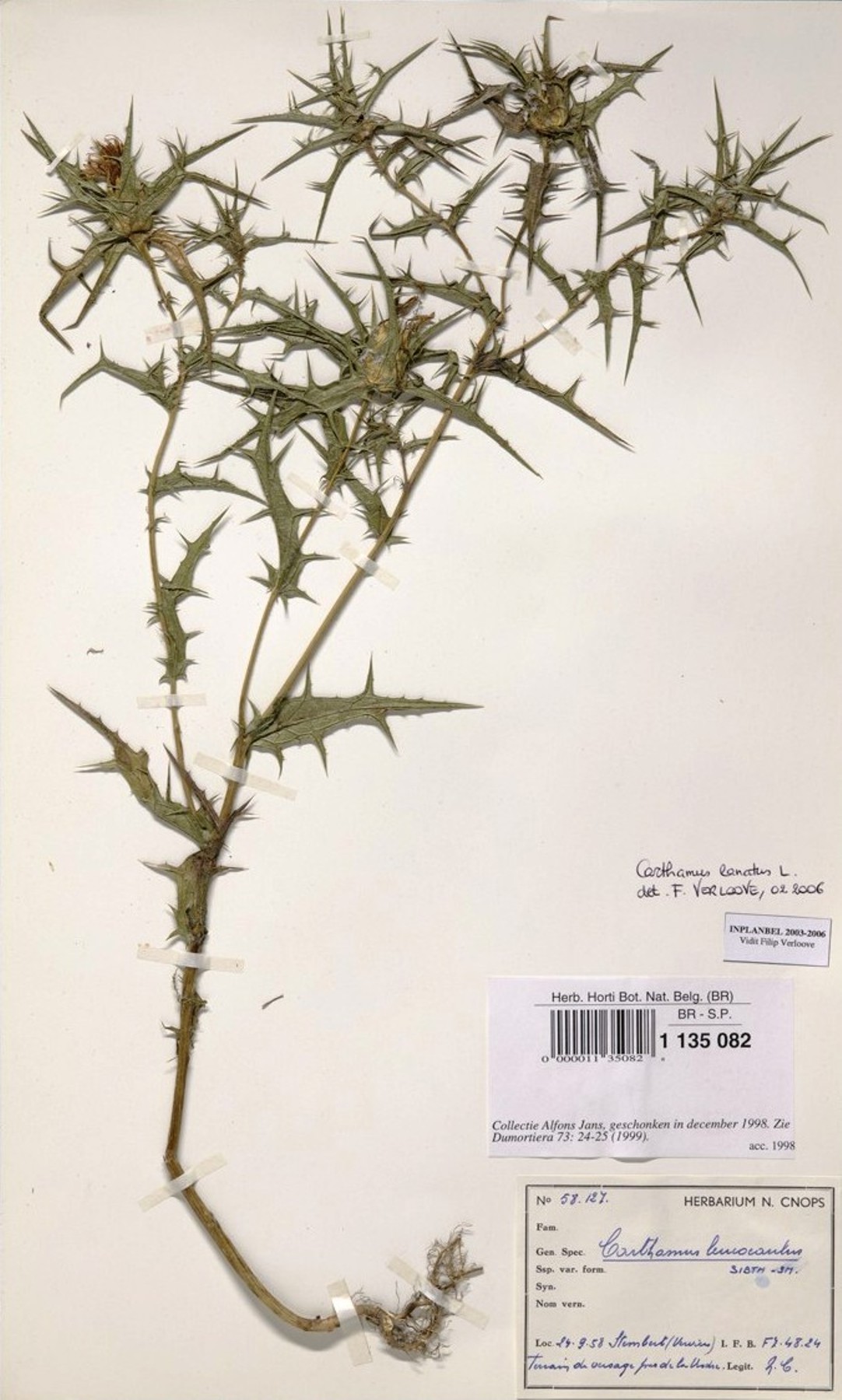 Description –
Carthamus lanatus is a herbaceous plant that grows from 2 to 6 dm (maximum 18 dm).
It is an annual plant that overcomes the adverse season in the form of seed, also has an erect floral axis and often without leaves. The whole plant has a thorny and glandular appearance.
The aerial part of the stem is erect and branchy with a surface covered by a pubescent-spidery toment (at the end it is caducous).
The leaves are divided into basal, cauline and bracteal; the lamina of the main leaves has a 1 – 2 pinnate-party contour with 3 – 4 pairs of segments equipped with sturdy 7 – 10 mm spines; the surface at the base is 3 – 7 veined;
– the basal leaves are more or less lyrated and collected in basal rosettes (they are often absent from the anthesis);
– the lower cauline leaves are petiolate (the petiole may be winged);
– the upper cauline leaves are sessile, patent and with a more or less arched bearing;
– the bractal ones are smaller but generally exceed the flowers and they are also thorny; they are progressively reduced in the scales of the envelope;
the size of the leaves is 6 – 12 mm wide (minimum 3 mm; maximum 35) and 30 – 45 mm long (minimum 20 mm; maximum 90 mm).
The inflorescences are formed by isolated flower heads and at the apex of the branches. The flower heads are formed by an ovoid envelope made up of several thorny and whole bracts (or scales) arranged in an embryonic manner within which a bristly receptacle is the basis for the flowers. Head diameter: 1.5 – 3 cm.
The flowers are tubular, tetra-cyclical (there are 4 verticils: calyx – corolla – androceo – gynaeceum) and pentamers (each verticillo has 5 elements).
Flowering is from June to August.
The fruits are cipsele, turbinate, tetragon, wrinkled at least at the base, brown of about 5-6 mm, the external ones rough, and sometimes without pappus. The pappus is double: formed on the outside by rigid and denticulate scales, 8-13 mm, in various brownish rows, inside by short and conniving scales.

Cultivation –
Downy Safflower is a spontaneous plant whose pollination occurs through insects (entomogamous pollination).
Fertilization occurs basically through pollination of flowers.
The seeds falling on the ground (after being transported for a few meters by the wind thanks to the pappus – anemocora dissemination) are subsequently dispersed mainly by ants-like insects (myrmecoria dissemination).

Uses and Traditions –
Downy Safflower is a plant which, when exported to other areas, outside of Europe, can become a pest. In the United States, where it is a naturalized plant, it is considered to be weed as it is harmful to livestock (it hurts the mouth and eyes). This plant can form vast impenetrable areas and tends to spread rapidly as cattle avoid it in favor of other more palatable species.
Also in Australia this plant is considered harmful.
Carthamus lanatus has been used, especially in the past, for its medicinal properties.
According to popular medicine, this plant has the following medicinal properties:
– anthelmintic (eliminates various types of worms and parasitic helminths);
– diaphoretic (facilitates skin transpiration);
– fever (lowers body temperature).

Method of Preparation –
Both flowers and seeds of this plant are used for food or pharmaceutical purposes.
The seeds produce an oil that can be used for various purposes.