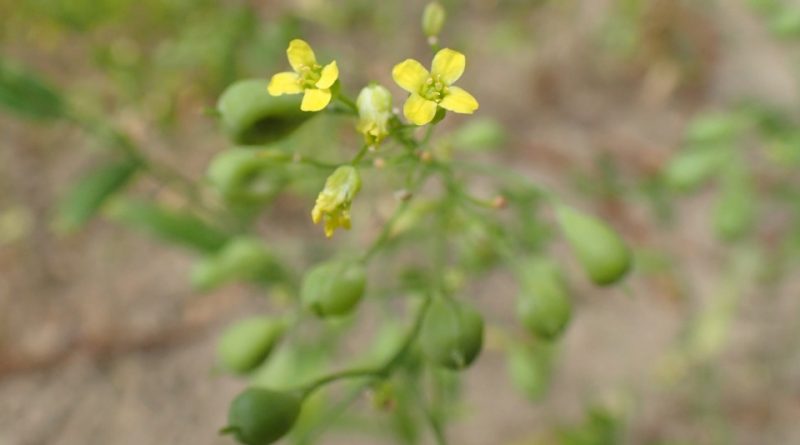 Etymology –
The term Camelina comes from the Greek χαμαι chamai dwarf, lying on the ground and from λίνον línon flax: because weed that reduces flax crops to the ground.
The specific sativa epithet comes from satum (past participle of sero sow, plant) sown, planted: which is sown or planted, cultivated, domestic.

Geographical Distribution and Habitat –
Camelina sativa is a plant native to Europe and Central Asia which is found in the wild or even cultivated in almost all regions of Europe, Asia and North America, but also in South America, Australia and New Zealand.
in Italy present in almost all the central and northern regions and in Sicily, perhaps introduced in very ancient times for food purposes. In the wild it is often found in uncultivated land, in vineyards and in ruderal environments such as at the edges of roads, below the lower mountain belt.
Its habitat is that of the semi-arid cold climatic zone, such as steppes and grasslands. 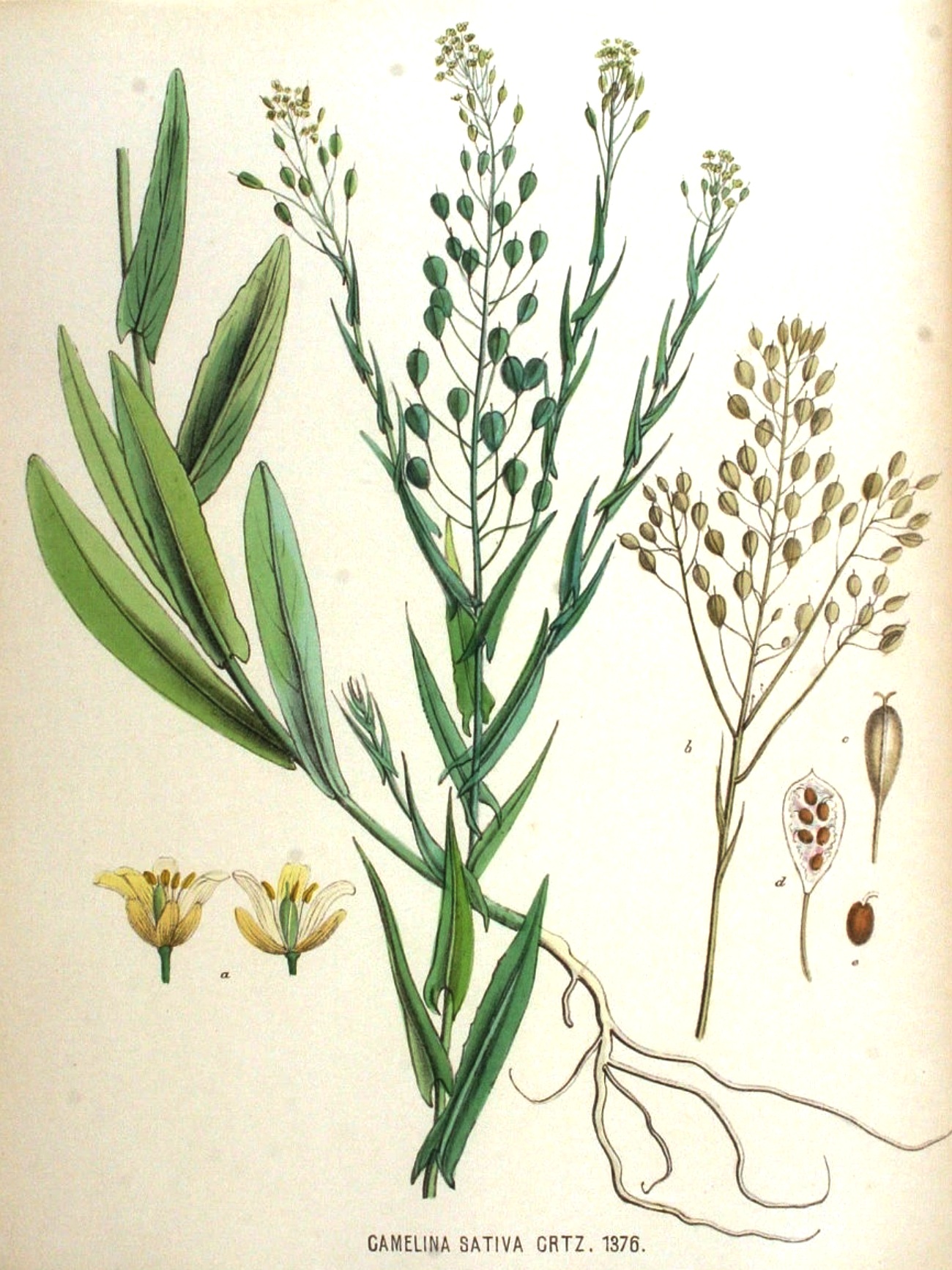 Description –
Camelina sativa is an annual summer or winter plant, which grows to a height of 30-120 cm.
It has branched stems that become woody when ripe.
The leaves are alternate on the stem, lanceolate, 2–8 cm long and 2–10 mm wide; both the leaves and the stems can be partially hairy.
It produces abundant four-petal, pale yellow and cross-shaped flowers.
The antesis, in Italy, is between May and June but can continue in colder countries until late summer.
The fruit is pear-shaped with a short beak.
The seeds are brown, or orange in color and 2–3 mm long.
The weight of 1,000 seeds varies from 0.8-2 g.

Cultivation –
Camelina sativa is grown for oilseeds, mainly in Europe and North America.
It is cultivated in a short cycle (85–100 days) and grows well in the temperate climate in light or medium-textured soils.
Sowing generally takes place in the spring, from March to May, but in mild climates, it can also be sown in the autumn.
The quantity of seed used is 3-4 kg / ha, with an inter-row from 12 to 20 centimeters at a depth of no more than one cm.
With high seeding densities, these plants become competitive with weeds. The seedlings emerge quickly and can withstand moderate frosts in the spring.
The plant is harvested and sown with conventional agricultural equipment, which makes it easy to insert it into a crop rotation for farmers who do not normally grow it.
Among the reports to be made, it should be noted that C. sativa subsp. linicola is considered a pest in flax fields. Attempts to separate its seeds from those of flax, with a sieving machine, over the years have selected seeds of similar size to flax seeds, an example of vavilovian mimicry.

Uses and Traditions –
Gold-of-pleasure is also generally known as gialdina, sommensina, miagro.
It is a plant that, since ancient times, an oil was extracted from the seeds used both for food and as fuel; the plant, which is still cultivated in some parts of Europe today, was also appreciated as fodder for livestock.
Extensive archaeological evidence shows that it has been cultivated in Europe for at least 3000 years. Early finds include the Neolithic levels in Auvernier, Switzerland (dated to the 2nd millennium BC), the Chalcolithic level in Pefkakia in Greece (dated to the 3rd millennium BC), and Sucidava-Celei, Romania (around 2200 BC).
During the Bronze Age and the Iron Age, it was an important agricultural crop in northern Greece beyond the current area of ​​olives.
It was also found in Denmark and during the Stone Age in Hungary.
Apparently, it continued to be cultivated during the Roman Empire, although its Greek and Latin names are not known. As early as 600 BC it was sown as a monoculture around the Rhine valley and was thought to spread mainly coexisting as a pest in linen monocultures.
In more recent times and until the 1940s, Camelina sativa was an important oil crop in Central and Eastern Europe and currently continues to be cultivated in some parts of Europe for the extraction of its oil from seeds.
Camelina sativa oil was used in oil lamps (up to the modern exploitation of natural gas, propane and electricity) and as edible oil (camelina oil). It was probably unintentionally brought to North America with flax seeds and had limited commercial importance until modern times.
Currently, the reproductive potential is unexplored compared to other commercially grown oilseeds worldwide.
For this reason, it is currently the subject of intense studies aimed at resuming its large-scale cultivation, for example for the production of biodiesel.
Among the interesting and potential uses for modern times we mention that of the stem fibers used for brushes, seed oil for cosmetics or burnt in lamps. Herbalists have also identified a therapeutic use.
The crop of this plant is being researched due to its exceptionally high level (up to 45%) of omega-3 fatty acids, which is rare in plant sources. The seeds contain 38 to 43% oil and 27 to 32% protein.
Over 50% of the fatty acids in cold-pressed camelina oil consist of the polyunsaturated fraction. The oil is also very rich in natural antioxidants, such as tocopherols, which make it highly stable, very resistant to oxidation and rancidity. It normally contains 1-3% of erucic acid and several varieties have recently been introduced. Camelina sativa with lower erucic and also “zero-erucic” content (with a erucic acid content of less than 1%). The vitamin E content of cameline oil is about 110 mg / 100 g.
Regarding its use as a fuel, studies have shown that Camelina-based jet fuel reduces net carbon emissions by around 80% and the U.S. Navy chose it as the raw material for its first aviation biofuel test, making successful repeated flights.
In this regard, Continental Airlines, in January 2009, was the first commercial airline to test a 50:50 mixture of biofuel fuel of biological origin and traditional jet fuel in the first demonstration of the use of sustainable biofuels to fuel a commercial airplane in North America.

Method of Preparation –
Edible seeds can be sprinkled on salad or mixed with water to produce a food with an egg-like appearance.
The oil extracted from this plant is suitable for use as cooking oil as it has an almond flavor and aroma.