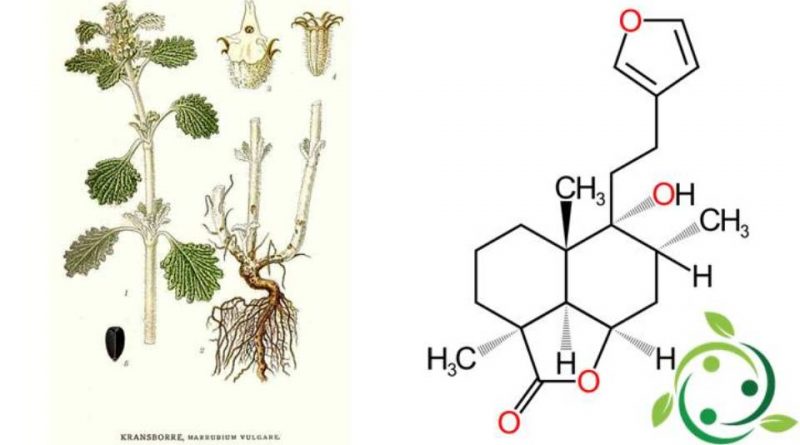 Marrubin is a diterpene lactone with a brute or molecular formula: C20H28O4.
Marrubin is a colorless, bitter, optically active substance, contained in the leaves of horehound and used in medicine as a tonic, stimulant and toxifuge.
This molecule was extracted in 1855 from the Marrubium vulgare L. by Harms and Mein and was isolated in crystalline form, a little later, in 1861 by Ludwig and Kromayer. The raw formula C21H28O4, assigned to it in the first research conducted by Gordin, was later changed to C20H28O4 by Lawson and Eustice and by Robertson, Hollins and Richards.

Many AAs dedicated themselves to the study of the structural formula by marrubina.
The outcome of these studies made it possible to recognize the composition of marrubine as that of a diterpene lactone, which by heating with alcoholic KOH gives the potassium salt of a monobasic acid, called marrubic acid, easily transformable into marrubine by dehydration.
Marrubin (which does not have choleretic properties) stimulates bronchial secretion (expectorant action).