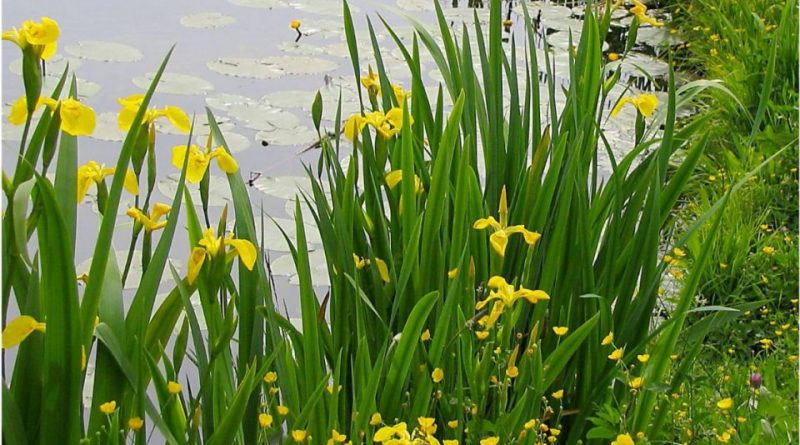 The Yellow flag (Iris pseudacorus L.) is a herbaceous species belonging to the Iridaceae family.

Etymology –
The term Iris is a genus dedicated to Iris Iris (in Greek mythology Ἶρις Iris), messenger of the gods whose name derives from that of the rainbow (ἶρις iris).
The specific epithet pseudacorus comes from the Greek prefix ψευδο- pseudo- pseudo, fallacious, lying and from the genus Acorus: false Acorus.

Geographical Distribution and Habitat –
Iris pseudacorus is a plant that in some regions where it is not native, has escaped cultivation to establish itself as an invasive aquatic plant that can create dense formations.
In Italy it is common, from sea level up to 1000 m., In ditches, swamps, rice fields, in the plain belt. Large specimens of this species are found in the western part of Scotland, where they constitute an important diet and a suitable habitat for the corncrake.
Its habitat is that of wetlands where it tolerates diving, low pH and anoxic soils. It is an aquatic plant but its rhizomes can survive long in the dry. The plant spreads quickly, both by rhizome and by dispersing the seeds in water. 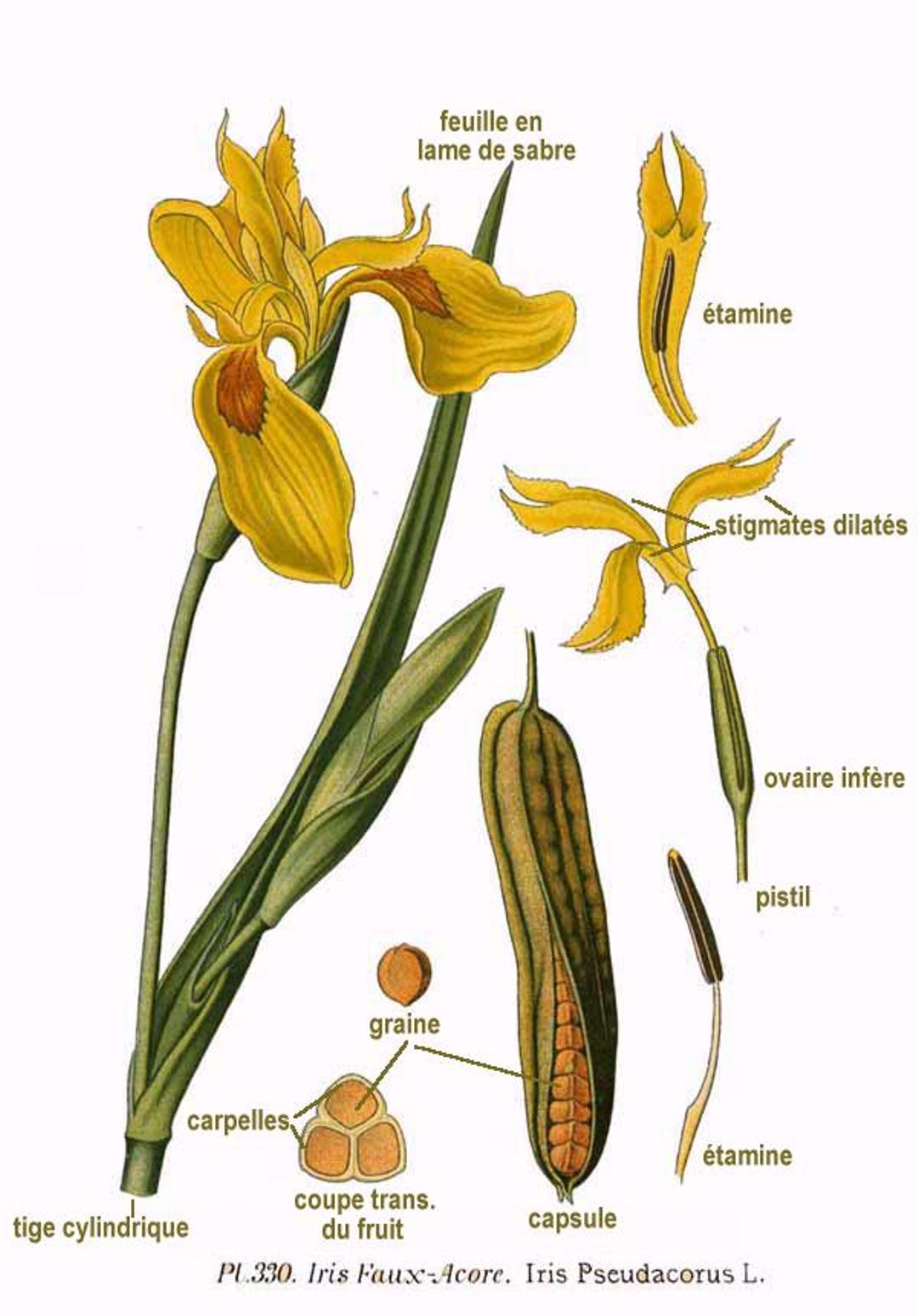 Description –
The Yellow flag is a perennial herbaceous plant, 1-1.5 m high (more rarely 2 m).
The leaves are erect, up to 90 cm long and 3 cm wide.
The flowers are collected in an inflorescence ending in an apical flower; they are bright yellow in color, with the typical Iris shape but with non-bearded external lacinias.
The flowering period is April – May.
The fruit is a loculicidal capsule, of 4-7 cm, cylindrical, trigona, with three loggias, floating like the numerous seeds, of 7-8 mm, flattened on the sides, brownish, capable of germinating even after having remained in the water for a year .

Cultivation –
Iris pseudacorus is grown in temperate regions as an ornamental plant. There are several cultivars selected according to the types of garden.
In regions where it is not endemic it has established itself as an invasive aquatic plant that can create dense formations, harmful to the other plants of the aquatic ecosystem. Plowing rhizomes is also often ineffective.
For this reason, its introduction has been prohibited in some areas, but it is still widely sold in others for ornamental use.
Planting takes place in the period of March-April or in August-September, in sunny positions in deep waters ranging from 15 to 45 cm depending on the variety.
It prefers full sun or partial shade and is very resistant to cold.

Uses and Traditions –
At one time, in herbal medicine, the juice obtained from the rhizome was used in the external treatment of wounds and to treat toothache, even though it has an irritating effect on the mucous membranes.
The rhizome, even dried, is completely fragrance-free and has been used as a tonic, astringent, diuretic, purgative and deworming, completely forgotten uses today.
The following products were obtained from the rhizome of the plant: tannins, yellow dyes from the flower and black dyes from the rhizome, ink.
In the past it was used for tanning hides: mixed with iron salts it gives a black dye

Method of Preparation –
The roasted seeds of Iris pseudacorus were used in times of famine as coffee substitutes.