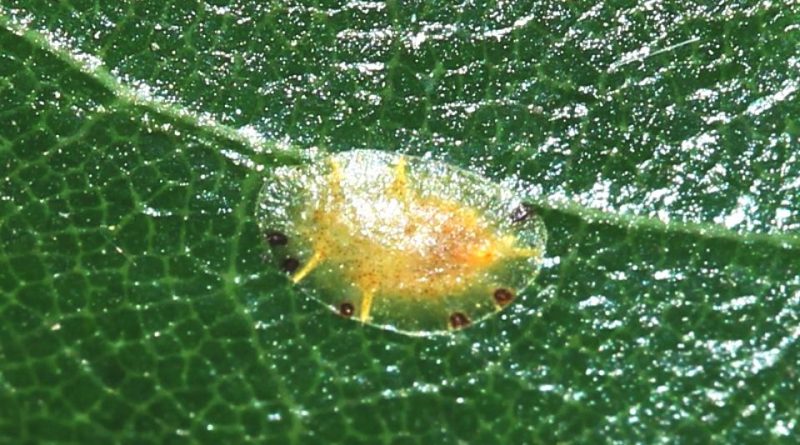 The Soft brown scale insect (Coccus hesperidum Linnaeus, 1758) is an insect belonging to the Coccidae family.

Geographical Distribution and Habitat –
The Soft brown scale insect is a polyphagous cochineal that feeds in particular on citrus fruits and on agricultural or ornamental greenhouse plants.
The insect has a widespread and cosmopolitan distribution.

Morphology –
The adult female of the Coccus hesperidum has a length of about 3.5-4 mm, oval in shape, with a depressed body and a yellow-brown color.
Juvenile forms are lighter in color than adult females.

Aptitude and biological cycle –
The Soft brown scale insect fruits overwinters as a nymph and makes several generations a year.
It is an ovoviviparous cochineal that produces young mainly by parthenogenesis.
Over the course of her life, a female can produce up to 250 eggs, some of which are laid every day.
The eggs are kept inside the insect until they hatch, when small nymphs emerge and are hatched for a few hours before dispersing.
These first stage nymphs move a short distance from the mother before settling down and starting to feed.
They are equipped with sucking mouthparts and feed on the sap of the host plant. They are largely sedentary for the rest of their lives and go through two other nymphal stages before they become adults.
Each generation takes about two months and there can be between three and seven generations in a year, depending on the climatic trend.
Males are occasionally produced and these go through four nymphal stages before becoming winged adults.
For its nutrition this mealybug ingests large quantities of lymph, while secreting an excess sugar liquid, in the form of honeydew. This attracts ants that often take care of these mealybugs, keeping predators away.
The cochineal lives preferably on the twigs and on the underside of the leaves where it forms colonies along the ribs and in the event of massive attacks, serious phylloptosis can occur.
The presence of Coccus hesperidum does not normally kill the host plant, but the loss of sap causes a slowdown in the growth of the host plant.
The main disadvantage for the host plant is instead linked to the proliferation of fumages that grow on honeydew, which reduces the area of ​​the leaf available for photosynthesis and ruins the appearance of the plant, its flowers and fruits.

Ecological role –
Traditionally, Coccus hesperidum was struggled with the use of pesticides, but these soon showed the disadvantage that other insects, especially pollinators, are also killed indiscriminately.
The most suitable approach is the agroecological one.
First the ants must be eliminated from the trees, preventing them from climbing on the trunks. This allows natural predators to thrive and keep under control these mealybugs even if, temporarily, there may be a temporary increase in the production of fumaggine which instead would be collected by ants.
At the same time, it is necessary to increase the ventilation inside the foliage, for the plants in the open field, and an integrated management of the natural parasites of Coccus hesperidum.
In the presence of mealybugs, it is then necessary to eliminate the use of nitrogen fertilizers which, by causing a softening of the tissues of the plants, makes them more palatable and therefore more subject to more massive attacks.
Another interesting possibility is the use of growth regulators such as the hydroprene hormone which interrupts the mutation of insects on a young scale.