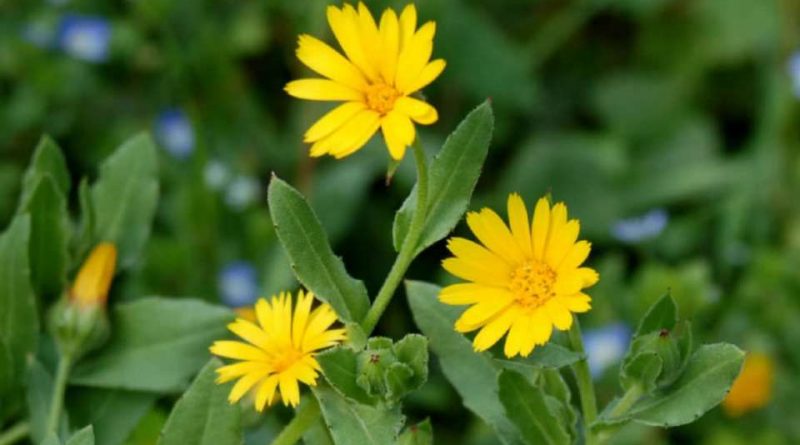 The Field Marigold (Calendula arvensis (Vaill.) L., 1763) is a herbaceous species belonging to the Asteraceae family.

Etymology –
The term Calendula comes from calendae, the first day of the month in the Roman calendar: allusion to flowering that lasts for several months (Greek calends …).
The specific epithet arvensis comes from arvum campo, arative soil: from the arable land, reference to the growth environment.

Geographical Distribution and Habitat –
The Field Marigold is a plant widespread in the countries of the Mediterranean basin and in a vast range that embraces North Africa (Morocco, Algeria, Tunisia, Libya, Egypt and Macaronesia), the Middle East (Israel, Jordan, Lebanon, Syria, Iran, Iraq, Afghanistan), the Caucasus (Armenia, Azerbaijan, Georgia, Turkmenistan) and Europe (Portugal, Spain (including the Balearic Islands), France, Italy, Germany, Switzerland, ex-Yugoslavia, Albania, Greece (including Crete) Cyprus, Romania, Hungary, Moldova and Ukraine).
In Italy it is present spontaneously in all regions except in the Aosta Valley and perhaps in Trentino-Alto Adige.
Its habitat is that of uncultivated land, on the edge of paths and roads, in vineyards, sometimes in ruderal environments, on mainly limestone soils, below the lower mountain belt but can reach up to 1,400 m. sl.m .. 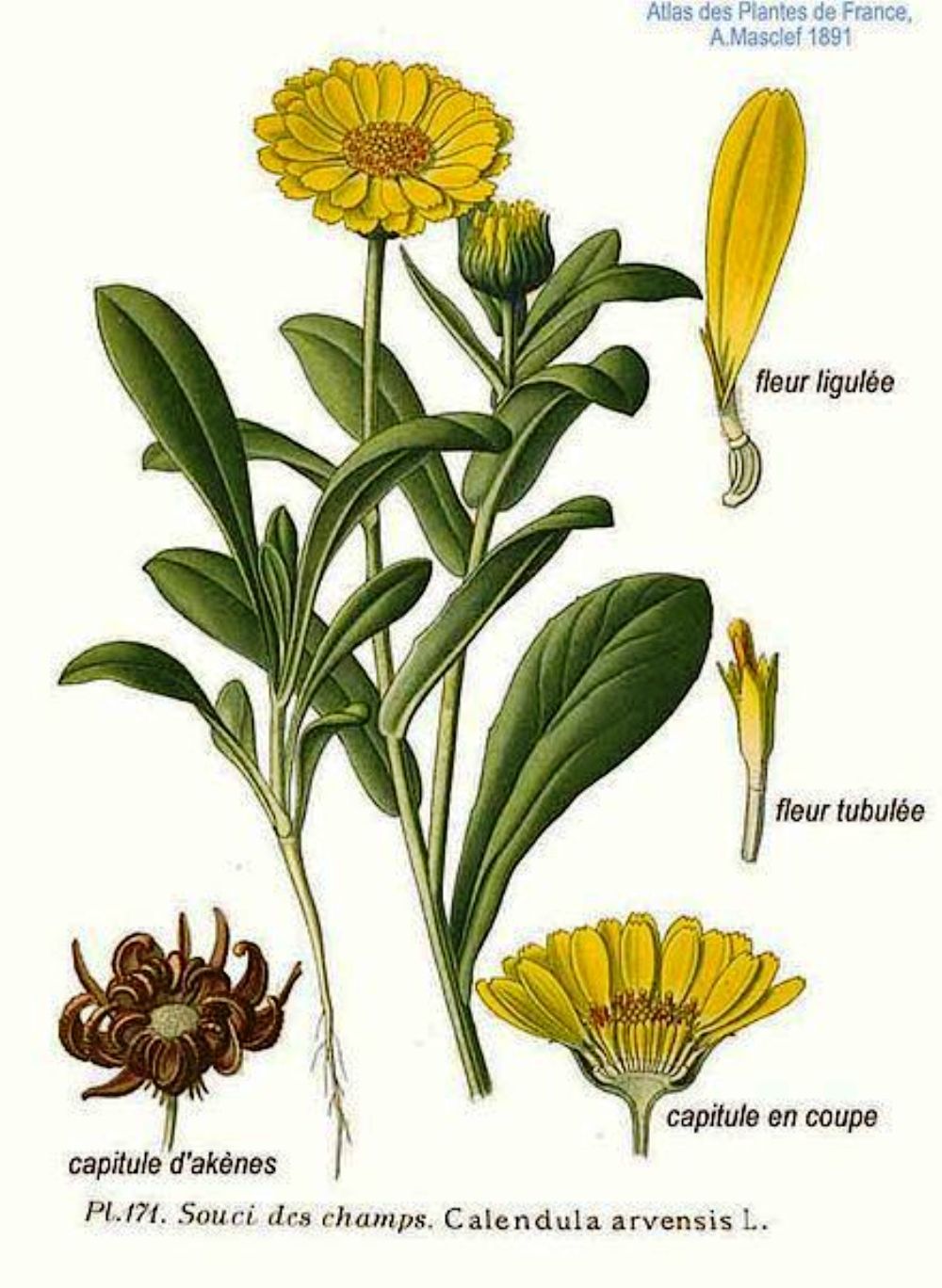 Description –
Calendula arvensis is an annual herbaceous plant, which has erect stems that reach a height of 30-50 cm.
The leaves are alternate, spatulate, covered with a dense hair, with an irregularly notched margin.
The inflorescence is a flower head with a diameter of 1–3 cm, of a bright orange color, with ligulate ray flowers, with tridentate ligula, and tubular disc flowers.
It blooms from September to May and rarely all year round.
The fruits are heteromorphic cypseles, without pappus, the arched exteriors, with a long rostrum, spinescent edge and trialed base, the boat-shaped medians, the annular internals, with the surface normally tuberculated and / or rippled transversely.
The seeds, 2–3 mm long, are sickle-shaped, hooked.

Cultivation –
Calendula arvensis is a gregarious plant that grows spontaneously in uncultivated land, on the edge of paths and roads, in vineyards, on mainly limestone soils.
The plant can be grown from seed in the same way as for Calendula officinalis.

Uses and Traditions –
Calendula arvensis, also known by the common names of wild fiorrancio, field marigold or two-colored calendula, in the past (and to a lesser extent even today) has been widely used as a medicinal plant: it contains flavonoids, saponins, resins, essential oils, as well as that pigments (lutein and xanthines) which give the characteristic orange color to the flowers and which were once used to dye the hair.
There is news of its frequent use until the Middle Ages, it was then forgotten for a long time. Rediscovered by modern medicine for the presence of flavonoids, saponins, resins, essential oils, traces of salicylic acid, beta carotene, lycopene, lutein and xanthines, the latter give the characteristic orange color to the flower.
It is used as an anti-inflammatory, antiseptic, antispasmodic, cicatrizing, callifugo, perspirant, and regulating menstrual flow.
Also used to dye hair, to soften the skin and to infuse to redden red eyes.
The leaves are used in a mixture with other herbs and the flowers are also used to garnish appetizers. The dried petals are used to flavor the wine, which after being exposed to the sun for 10 days, becomes an excellent vinegar.
In Greek mythology the plant is associated with Aphrodis who grieved for the death of the young lover Adonis wept tears, which when touching the ground, turned into marigolds. For this reason, in the nineteenth century, the flower was always associated with sad symbologies caused by love pains or jealousy and deceptions.
William Shakespeare also praises the flower in the sonnet xxv “The favorites of the great princes open their beautiful petals like calendula under the sun’s eye”.
From an ecological point of view, it should be remembered that it is the host plant of the larvae of various species of Lepidoptera, including the Cucullia calendulae.
The pollination of this plant is both entomophilous and anemophilous.

Method of Preparation –
Calendula arvensis, as well as for pharmaceutical uses, can also be used in the kitchen.
The leaves are used in the mix of wild herbs in salads together with other herbs and the flowers are also used to garnish appetizers.
With dried petals the wine is flavored, which should be exposed to the sun for 10 days, to then become an excellent vinegar.