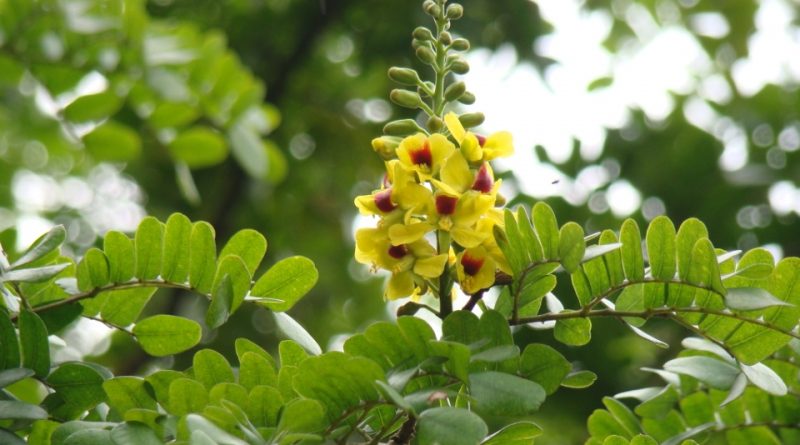 Pernambuco or pau brasil (Caesalpinia echinata Lam., 1785) is an arboreal species belonging to the Fabaceae family.

Systematic –
From a systematic point of view it belongs to the Eukaryota Domain, the Plantae Kingdom, the Magnoliophyta Division, the Magnoliopsida Class, the Fabales Order, the Fabaceae Family and therefore to the Caesalpinia Genus and the C. echinata Species.

Etymology –
The term Caesalpinia of the genus was dedicated by Linnaeus to Andrea Cesalpino (“Andreas Caesalpini”, 1519-1603), botanist, philosopher and doctor of Pope Clement VIII; in his De Plantis Libri he illustrated a taxonomic system based on the reproductive structures of plants and was denounced by theologians because in ‘Genesis’ there is no mention of the sexual organs of plants.
The specific epithet echinata comes from the Greek ἐχῖνος echînos hedgehog, porcupine, sea urchin and, by extension, thorny: equipped with thorns or spines.
The popular Portuguese name pau brasil literally means “tree brasil”. The word brasil could derive from the brace red color (brasa in Portuguese) of the resin of the wood of this tree, but there are many other alternative etymologies of the word brasil, so it is not possible to be conclusive regarding the origin of the name pau brasil. The name Brazil would derive however from that of the plant.

Geographical Distribution and Habitat –
Pernambuco is a native plant of the Mata Atlântica, the virgin forest that completely covered the coastal regions of Brazil and is present in South America, in the area between eastern and northeastern Brazil.
Its habitat is represented by woods on arid soils consisting of limestone, by the coastal forest and woods, generally on sandy or clayey soils that are well drained, preferring the less dense open forest, often on escarpments. 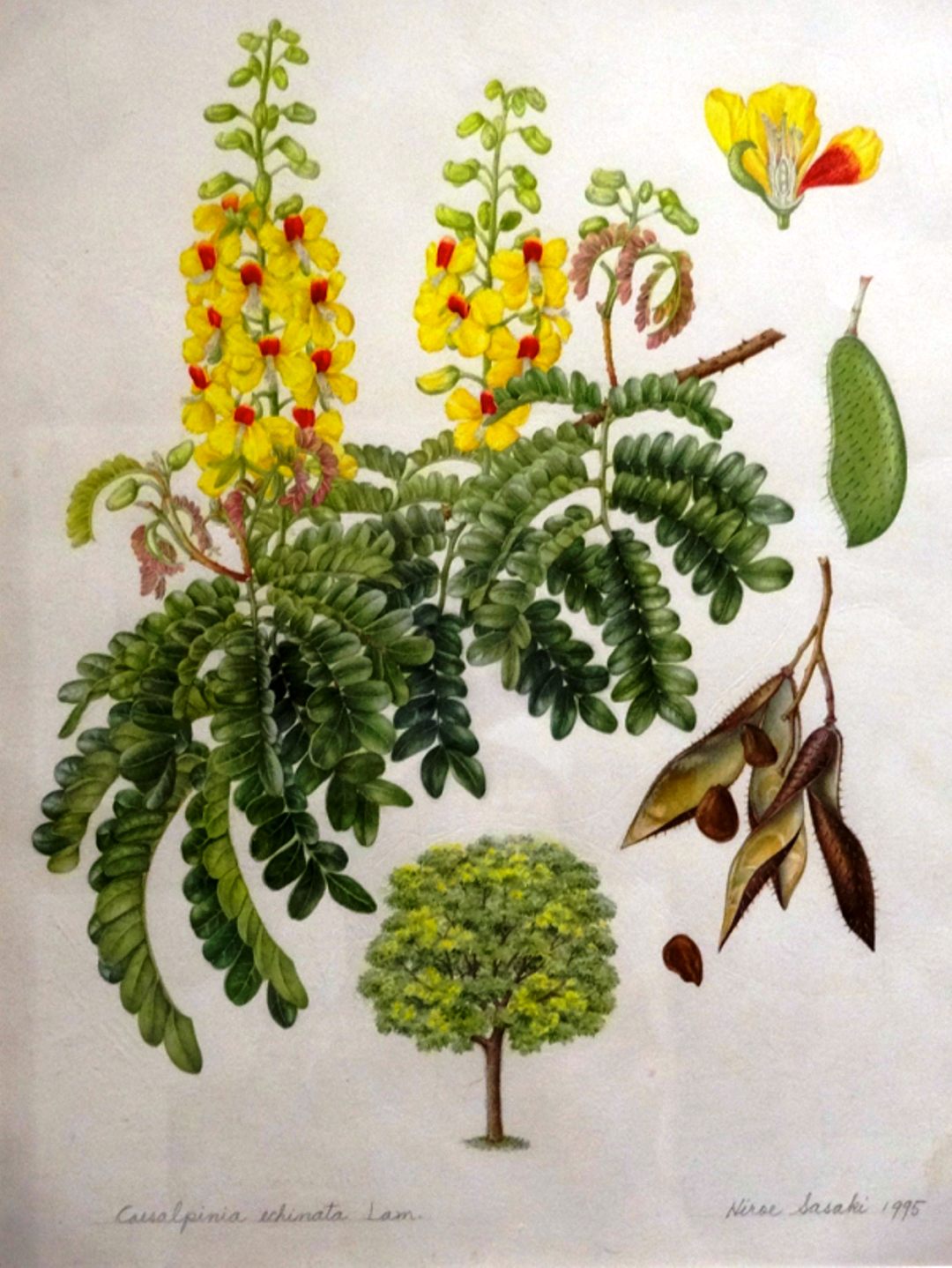 Description –
Pernambuco is a tree that reaches 15 meters in height.
The trunk is erect, dark gray in color, covered with thorns, especially in the younger branches.
The leaves are compound paripennate, with a bright green color.
The flowers are formed on upright clusters, near the apex of the branches; they have four yellow petals and one minor red and are sweetly perfumed; in the center there are ten stamens and a pistil, with an elongated ovary.
The fruits are brown colored berries, covered with long and sharp thorns. Berries contain 1 to 5 disc-shaped seeds.

Cultivation –
Caesalpinia echinata is a plant that prefers well-drained, alkaline soil and a position in full sun.
The now established plants are very drought resistant and quite tolerant to winds.
After sowing you can have trees of two meters in height after two years.
Plants begin to bloom around 3-4 years.
The development of heartwood in cultivated trees is considerably faster than in nature; The diameter in the chest, or DBH, of a 17-year-old cultivated tree can be compared to a 70-year-old tree grown in nature.
Apparently, the quality of wood from crops is not suitable for the production of violin bows and consequently there is no interest in the cultivation of species for the production of wood.
Trees that grow in nature are often covered in orchids and other epiphytes. Plants of this genus are particularly useful for honey mushrooms (Armillaria). This species has a symbiotic relationship with some soil bacteria, these bacteria form nodules on the roots and fix atmospheric nitrogen. Part of this nitrogen is used by the growing plant, but some parts can also be used by other plants that grow nearby.

Uses and Traditions –
In the tupi language pau brasil is called ibira pitanga, or “red wood”. The wood is used for cabinet making and for the construction of musical instruments (in particular bows for bowed instruments), pencils and luxury ballpoint pens.
Widely marketed and used in dyeing shops, pernambuco wood was used to give fabrics a fine shade of red, at a lower cost of raw materials than chermes and other dyes of animal origin.
The first economic activity of the Portuguese colonists in the newly discovered Terra de Santa Cruz, the ancient name of Brazil (16th century), was precisely the cutting of pernambuco to obtain precious wood and resin.
The red resin, commercially known as brasilein, was used as a dye by the European textile industry and gave fabrics a superior quality color. This fact, combined with the industrial exploitation of red wood, generated a huge market demand and a consequent devastating cut of the pernambuco in the Brazilian forests.
In just under a century, there were no longer enough trees to satisfy the demand, even though specimens continued to be occasionally cut down.
With the end of the cut of the pernambuco the danger of extinction did not disappear. The economic activities that followed, such as the cultivation of sugar cane and coffee, and the growing population pressure were the cause of deforestation of the Mata Atlântica. Thus, the natural habitat of the species shrank dramatically.
But under the rule of Emperor Dom Pedro II, large areas of the Mata Atlântica, especially in the state of Rio de Janeiro, were recovered and a partial ecological awareness slowed the deforestation. Meanwhile, pernambuco was a tree already considered extinct.
In the 20th century, Brazilian society became aware of the fact that pernambuco, a symbol of the country, was in danger of extinction and initiatives were launched with relative success to reproduce the plant from seeds and use it in forest recovery projects.
Today, pernambuco has become an ornamental tree. It is still uncertain whether its natural habitat will be devastated again, but the survival of the species seems ensured in gardens and parks.
The species is cataloged in the IUCN Red List of plants threatened with State: A1acd endangered.

Method of Preparation –
Other uses include a powdered bark-based coal that is infused and used to treat diarrhea in children. The wood is also odontalgic and tonic.