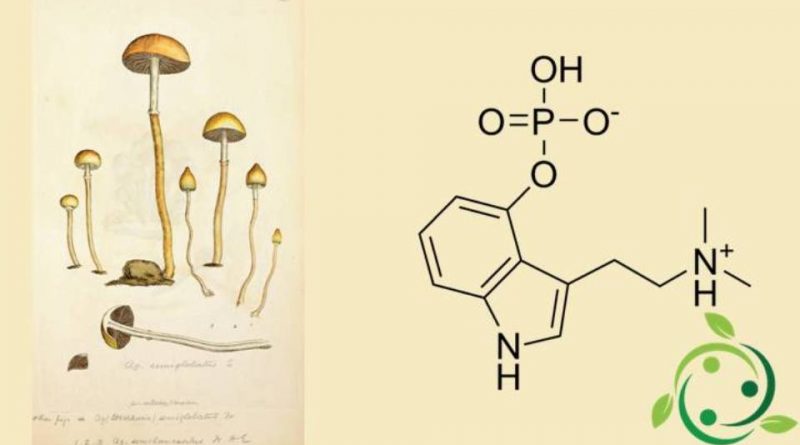 Psilocybin, whose term in the official IUPAC nomenclature is: 3- (2-dimethylaminoethyl) -1H-indol-4-yl] dihydrogen phosphate, also known by the abbreviated name 4-PO-DMT or with the alternative name 4-phosphoryloxy-N, N-dimethyltryptamine is a psychedelic tryptamine with brute or molecular formula: C12H17N2O4P.
Psilocybin is a substance found in some hallucinogenic mushrooms of the genus Psilocybe and Stropharia.
When psilocybin is ingested it is quickly dephosphorylated to psilocin which exerts effects on the central nervous system, inducing psychedelic experiences, entheogenic and slightly euphoric effects.
This substance became known only in the sixties of the twentieth century, when it gained considerable popularity as an amazing drug, which is why it was banned in almost all states of the world.
In Italy, currently, it is included in table 1 of narcotic substances, for which possession and sale is illegal.
However, the use of psilocybin is not recent. In fact, in remote times it was already used by the peoples of Latin American civilizations in shamanic rites, finding themselves in the formulation of ritual drinks.

However, the importance of this substance has come out in recent times. Only in recent years some studies are showing its important therapeutic properties.
In fact, when used under medical supervision, it can be useful, especially for certain psychiatric diseases, such as anxiety states or depressive syndromes, in patients who have shown themselves to be non-receptive to traditional drugs.
Psilocybin, therefore, a psychedelic substance present in some types of hallucinogenic mushrooms, has been used for some time (in laboratory preparations) as an antidepressant treatment in preliminary tests on patients who do not respond to traditional pharmacological treatments.
A recent study published in the journal Neuropharmacology tries to explain why this psychoactive seems to give good results (although still to be verified).
Psilocybin would act opposite to selective serotonin reuptake inhibitors (SSRIs), which are the most common antidepressant drugs: that is, it would increase emotional connection in patients rather than sedate them. The hypothesis is that this substance can work precisely because it increases and revitalizes the brain’s response to emotions – even negative ones – improving its acceptability: this could be precisely the key to the effectiveness reported by the patients who tested it.