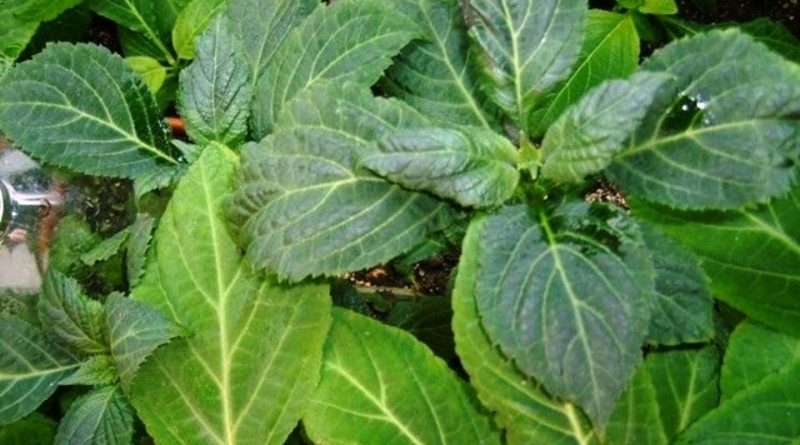 Systematic –
From a systematic point of view it belongs to the Eukaryota Domain, Plantae Kingdom, Magnoliophyta Division, Magnoliopsida Class, Lamiales Order, Lamiaceae Family and therefore to the Genus Salvia and the Species S. divine rum.

Etymology –
The term Salvia was already used by Pliny for Salvia officinalis, to be saved, healed (connected with the Sanskrit sárvas intact): for officinal properties.
The specific divine epithet rum is the plural genitive of divinum, the divine, religious sacrifice, sacred rite: pertaining to sacred events, in relation to this psychoactive plant of Mexico (Sierra Madre area) used by the Mazatec Indians for religious divination rites and care.

Geographical Distribution and Habitat –
Salvia divinorum is a hallucinogenic psychoactive plant widespread in nature almost only in Mexico (area of ​​Sierra Madre Mazateca) which appears to have arrived in Europe through the clones donated in 1962 by a Mazatec curandera to R. Gordon Wasson and Albert Hofmann.
Its native habitat is the rainforest located in the isolated Sierra Mazateca of Oaxaca, Mexico, where it grows in shady and humid places at altitudes from 300 to 1,830 meters. Its most common habitat is black soil along the banks of the river where small trees and bushes provide an environment of low light and high humidity. 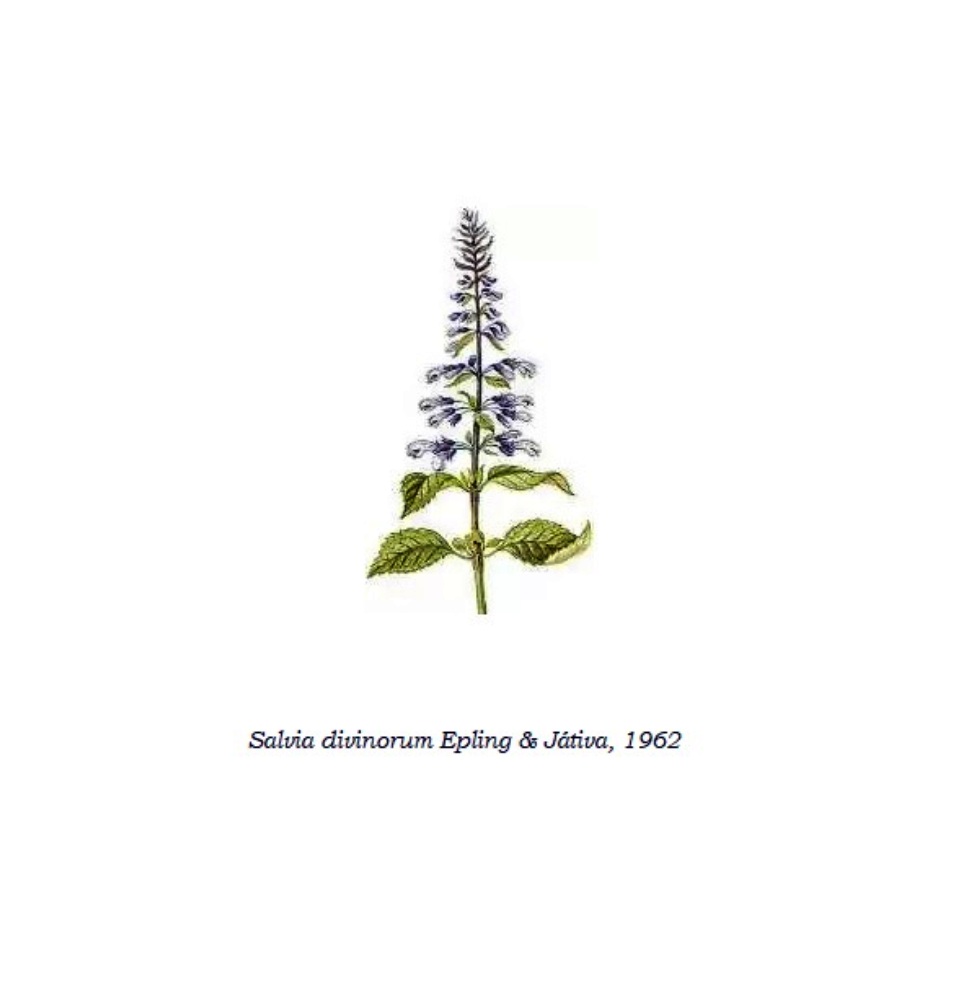 Description –
The plant grows to over one meter in height.
It has hollow square stems that tend to break or drag on the ground, with the plant taking root fairly quickly at the nodes and internodes.
The leaves are large green ovate (often also toothed), with a yellow undertone and reach 10-30 cm in length. The leaves have no hair on any surface and the petiole is small or absent.
The flowers, which bloom only rarely, grow spiral on an inflorescence of 30 centimeters, with about six spiral flowers. The flowers measure 3 centimeters and are white, curved and covered with hair and kept in a small purple calyx covered with hair and glands.
When it blooms in its native habitat, it does so from September to May.

Cultivation –
The reproduction of Salvia divinorum occurs almost exclusively by cutting; the seeds are produced very rarely by the plant and rarely germinate and in any case seeds have never been observed on wild plants.
For an unknown reason, pollen fertility is also reduced. There is no active inhibition of the pollen tube within the style, but some event or process, after the pollen tube reaches the ovary, generates an anomaly.
The most likely explanations are some form of hybridism that does not allow the process to be carried out successfully.
Thus all the populations of the Sierra Mazateca appear to be clonal. This is related to the process in which the square stems of the plant break easily and tend to drag themselves on the ground, easily taking root on the knots and internodes.
This factor is the basis for which botanists have not yet determined whether Salvia divinorum is a cultivar or a hybrid.

Uses and Traditions –
This plant was discovered in 1939 by J.B. Johnson who described the use of a plant called “Hierba María” by Mazatec shamans but it was only in the 1980s that Ortega and Valdes isolated Salvinorin A, the active ingredient responsible for hallucinogenic properties.
The use of the divine Sage rum has been documented, since time immemorial, in the ritual uses by the Mazatec Indians of the Oaxaca region, both in religious divination rites and for treatments.
The particular properties of this plant are linked to the presence of a neoclerodano diterpenoid which is salvinorin A.
This molecule is present in the leaves of the plant and is currently being studied; however, we do not yet have a precise picture of the effects of this molecule, as it cannot be compared to other psychoactive substances. The psychotropic activity of salvinorin A acts selectively on a particular receptor called k-opioid (KOR).
Salvinorin A was recognized as the most powerful natural psychoactive substance in 2002, the year in which Salvia divinorum became illegal in Australia.
Salvia divinorum is considered an entheogen (therefore with a marked psychedelic or hallucinogenic effect) and is one of the few dissociative hallucinogens found in nature.
For Mazatec shamans, Salvia divinorum historically impersonates a female divinity, later identified with the arrival of the Conquistadores in the Virgin Mary, hence the name Maria Pastora (female entity leading a cult that has become syncretic). In ancient times it was used as an oracle; we turned to the divinity for advice, to find out where to find lost or stolen objects.
The effects are mostly short-lived and depending on the method of intake they can vary from 5 to 30 minutes if smoked, one or two hours if chewed (sublingual intake through fresh leaves or extracts) and more hours if ingested but with a peak of more limited intensity (the effects of ingestion of leaves are not always perceived because salvinorin A is difficult to absorb by the gastrointestinal tract).
Sensitivity to the substance varies enormously from person to person: dosages without effects in some subjects can generate very intense experiences in others; for this reason, although it is not recommended to take them, it is appropriate to gradually reach higher dosages, to avoid experiences of unexpected strength and consequent repercussions on mood and psyche.
Particular often found by users (as well as by Mazatec progenitors) is the substantial difference between the experiences conducted in the presence of light and in the absence of the same, the former are mostly vague, not very detailed if not completely absent, the latter are much deeper and more defined to the point of giving the idea of ​​being physically in other places and situations. This particular sensitivity to external light is different in the case of the use of concentrated extracts and enhanced leaves, in fact capable of modifying the psyche much more deeply.
Add to this the fact that the effect also varies considerably based on the set (the mood of the person at the time of hiring) and the setting (the environment in which you are located). In any case, hiring is not recommended in crowded parties and in situations where certain actions must be taken (the temporary loss of perception of external reality can be dangerous for oneself and for others).
Like many psychedelics, it could compromise the psychic balance in those who have not yet completed their psychological maturation, being the cause of depression, insomnia, slatentization of previous psychoses and paranoid disorders.
Concrete risks to physical safety are linked to the loss of perception of one’s body, falls or collisions can occur. For this reason, it is recommended to use it in comfortable environments with the presence of a lucid and prepared person to follow the experience of those who are preparing to hire them (until the end of the effect), this person is called a sitter.
For this reason, in Italy, the Ministry of Health, in the Official Gazette No. 54 of 7 March 2005, added the plant and its active ingredient (salvinorina A) in the list of prohibited substances, following the assessments of the Istituto Superiore of Health.

Method of Preparation –
Due to the particular characteristics and properties of Salvia divinorum, any use and use is not recommended. Furthermore, it should be noted that the contents reported, the uses, the assumptions, also with reference to bibliographic or historical data, also with other peoples, could generate dangerous situations or damage to anyone who used them.

One thought on “Salvia divinorum”