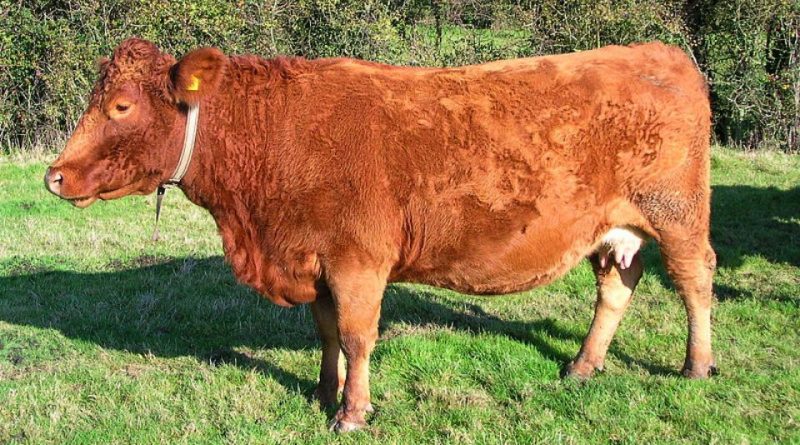 South Devon (Bos taurus Linnaeus, 1758) is a bovine breed native to the south-west of England, for the production of meat.

Geographical and Area Distribution –
South Devon is one of the few British breeds that were originally selected for work and for the production of meat and milk. The first exports to Australia were of cows for dairy production and were transported on sailing ships. Other large exports took place between the late nineteenth and early twentieth centuries, but over time, the breed lost its identity due to continuous crossbreeding.
Imports from Great Britain took place in 1969 and the first purebred animals were imported from New Zealand in 1971. The breed is now present in most states of Australia.
The first heads of South Devons were brought to the United States in 1969, and the North American South Devon Association was founded in 1974 to develop, register and promote the South Devon breed in that country.

Origins and History –
The South Devon breed is believed to have evolved from the large red cattle from Normandy that were imported to England at the time of the Norman invasion. This breed was formed in south-west England, in South Hams, which is a local district in Devon. It later spread across Devon and Cornwall.
Historical evidence indicates that isolation caused the differentiation of the Devon and North-South reared animals into physically distinct types, although occasional migrations between the two breeds occurred until the mid-nineteenth century.
The South Devon breed had been founded as a stand-alone breed in the 1800s. With a light red coat, they were cattle powerfully built to provide rich milk and good meat, finely granulated and marbled.
Careful selection of livestock has significantly improved the breed. The South Devon Herd Book Society was founded in 1891 when it was recognized by the government as an official body, and the South Devon Herds became one of the fourteen breeds of cattle whose genealogical books date back to the second half of the nineteenth century.
Until the early twentieth century, the breed was considered dual-purpose, for the production of milk and beef. Although most of the herds were milked during and immediately after World War II, the trend has been increasingly towards a breed for meat production.

Morphology –
The South Devon differs from the Devon breed by having a lighter red coat than it and horns directed laterally and downwards.
Females have an early maturation and can give birth at two years. A single cow can give birth every year for a maximum of 15 years, with an average gestation of 286 days. Most births are single calves, but twins occur in about 10% of the parts.
The bulls have a rapid growth, an early maturity and can generate between 15 and 18 months. Bulls can work until the age of 12. A fully mature bull can weigh between 1,200 and 1,600 kg, although the largest recorded South Devon has been weighed at 2,000 kg.
The weight of the cows is on average 700 kg.
South Devon is the largest of the native English breeds.

Productive attitude –
South Devon is a breed now with a strong aptitude for meat production.
They are very rustic and frugal animals that have been imported with excellent results in tropical regions around the world.
South Devon is a breed that is exceptionally adaptable to different climatic conditions and is currently well established in the five continents. Wherever South Devon cattle were introduced, they were well received and showed strong performance in terms of production and profitability.