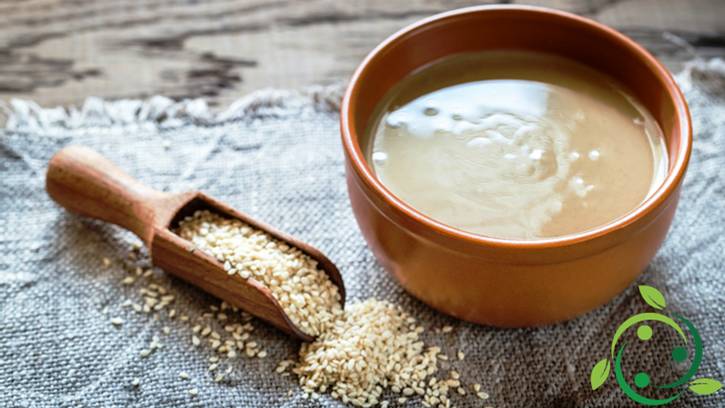 La Tahina (in Arabic: طحينة, ṭaḥīna, Hebrew: טחינה) is a sauce made with shredded white sesame seeds, with the addition of sesame oil.

Origins and History –
Tahina is a food with the consistency of a sauce, derived from white sesame seeds, very common in Greece, Turkey, North Africa and the Near East. It is also called sesame butter or sesame cream.
Tahina is therefore a sesame seed sauce, typical of Middle Eastern cuisine, which has spread thanks to its nutritional properties, as a delicious ingredient in natural cooking.
This sauce is easy to find and try while traveling in the Middle East, North Africa, but also in Turkey or Greece.
The name, which some write tahin or tahini, is of Arabic etymology and the origin is very ancient, because sesame in the East has been cultivated for thousands of years and seems to be the oldest known condiment.
In Italy and in some western countries tahina is widespread in natural cooking for its nutritional qualities, enclosed in sesame seeds: many proteins and especially Omega 3 and Omega 6 fatty benefits, as well as mineral salts, in particular calcium, phosphorus, magnesium . The sauce is ready but it is very simple to prepare it at home. Just toast the sesame seeds in a pan quickly (be careful not to burn them), let them cool and crush them in the mortar or blend them in the mixer with olive oil, seeds or better sesame, until they are reduced to a paste.

Description –
Tahina is a real sauce with a fairly thick consistency (so much so that it is also called butter or sesame cream); the scent recalls that of peanuts, with less sweet and intense notes, and the flavor toasted walnuts.
It also has a color which, depending on the preparation and variety of sesame seeds, oscillates around a beige color.

Active principles –
From a nutritional point of view, tahine is rich in vitamin E, B, mineral salts such as calcium, magnesium, silicon, phosphorus, zinc and iron. This makes it indicated in cases of exhaustion or during convalescence. Sesame seeds also contain two substances, sesamine and sesamoline, which have been shown to have an active role in lowering the cholesterol level by preventing cardiovascular diseases. Sesamine protects the liver from damage resulting from oxidation. It should however be used in moderation because, like all foods derived from the whole seed of a plant, it is very caloric: 100 g of ṭaḥīna bring about 600 calories, but the amount of oil added to the sesame flour, which can raise the calculation of the final calories.

Properties and Uses –
The dettoaḥina, as mentioned, has the consistency of a paté and is used as a condiment in numerous recipes: falafel, meatballs made from fava bean or chickpea, usually accompanying sliced ​​tomatoes and cucumbers, or to prepare hummus, a typical chickpea cream of the Arab countries to which ṭaḥina is mixed. It also goes well with some meats, especially if the taste is tempered by garlic and lemon juice.
Its flavor is similar to that of walnuts with an aroma reminiscent of that of peanuts, but it is less sweet and with a toasted note.
Halva is also found as a dessert, prepared with the addition of almonds and pistachios, and consumed together with honey on bread.
This pate is often prepared at home and the result is qualitatively superior if done at the moment. In fact, additives are often added industrially to stabilize the compound, which normally would easily separate into two phases.

Preparations –
To prepare tahina it is necessary to toast the white sesame seeds lightly, so that they maintain a delicate flavor without a bitter aftertaste, ground in flour and mixed with oil until a cream is obtained.
Obviously, the homemade tahina, having no stabilizers and preservatives, is of superior quality but can also be found ready in jars in the ethnic shops and supermarkets best stocked, even organic: the best contain only sesame seeds, without preservatives or whiteners . Once opened, it should be kept in the refrigerator.
Among the recipes based on tahina we mention:
– Hummus of chickpeas;
– 3-grain hamburger;
– Vegetable cannoncini with chickpea hummus;
– Spelled tagliatelle with Tuscan cabbage pesto and leeks;
– Couscous with vegetables and sesame sauce.