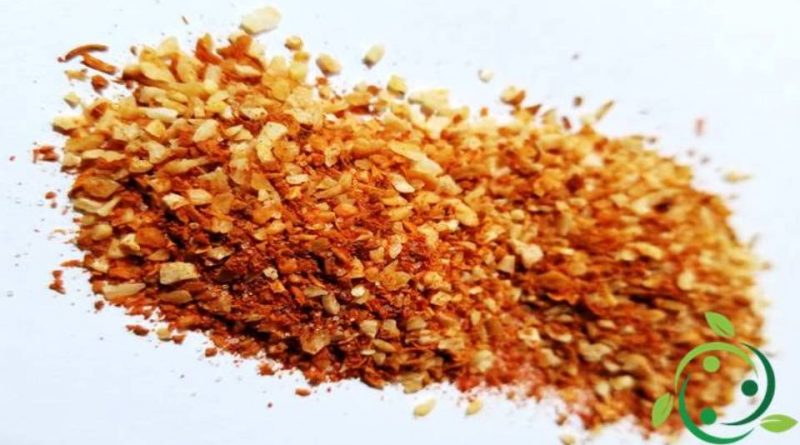 Taklia is a mixture of spices of Middle Eastern origin and particularly used in the cooking of the Arab countries.

Origins and History –
Taklia is a mixture of spices whose composition is based on crushed and chopped garlic and fried wild coriander.
This mixture can however be enriched with the addition of cayenne pepper, salt.
Taklia is a simple and multipurpose blend popular in all Arab countries and especially in Lebanon and Syria and widely used in Egypt; in the latter country it is especially adopted with melokhia (Corchorus olitorius L.).
The use of this spice is also traditional during Ramadan.

Description –
Taklia is part of those blends, widely used in Arab or Middle Eastern countries, obtained by shredding and mixing, in varying percentages, also according to particular traditions, garlic, coriander, cayenne pepper, salt.
A more or less fine powder is thus obtained, where the individual components can still be identified, with a variable coloring around the orange color.

Active principles –
The nutritional values ​​of Taklia are linked to the percentages that are used of the individual components which, as is evident, depends very much on the starting raw materials, for which there is no standard data sheet of the nutritional values ​​and substances present in this spice.
This is due not so much to the variability of the components of Taklia but also for the variety of ingredients and also for the difference in characteristics, often of the spices that compose it, as they also come from somewhat different cultivation systems. For the nutritional values ​​of garlic, coriander and cayenne pepper, see the specific data sheets.

Properties and Uses –
Taklia is a mixture of spices which is usually added at the end of cooking as an aromatic.
Generally it is blended with olive oil and used as a condiment or added directly to soups, stews, vegetables or meats.

Preparations –
Taklia sauce is a tasty Middle Eastern mixture of garlic and coriander seeds, with a delicate and very sweet taste.
The procedure for the preparation of Taklia simply consists of the separate shredding of the individual components and their subsequent mixing.
However, it is recommended to prepare it from time to time to have a more lively aroma and in any case to keep it in dark glass jars away from sources of heat, humidity and light.