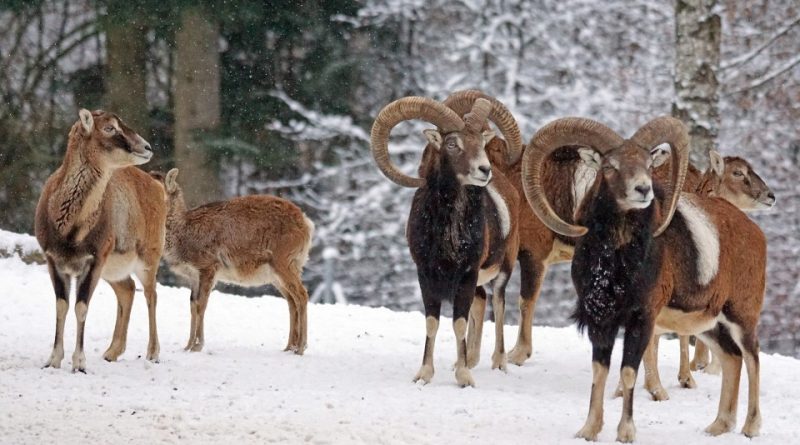 The European mouflon (Ovis musimon Pallas, 1762) is an artiodactyl mammal belonging to the Bovidae family.

Systematic –
From a systematic point of view it belongs to the Eukaryota Domain, Animalia Kingdom, Phylum Chordata, Mammalia Class, Artiodactyla Order, Bovidae Family, Caprinae Subfamily and therefore to the Genus Ovis and to the Species O. musimon.

Geographical Distribution and Habitat –
The European mouflon is a species present in Europe and America, particularly in Chile, Texas and Hawaii.
The mouflon is thought to have been introduced in Roman times by man starting from semi-domesticated forms of sheep, which later became wild. From here, the mouflon was later introduced also in continental Europe from the eighteenth century, in particular there are consistent populations in Central Europe and is present in Sardinia, Corsica and Cyprus, of which, however, it would not be native as there are no finds fossils of these animals.
In Italy, the mouflon, as well as with a good indigenous population in the Gennargentu and Montiferru, is widespread with about forty isolated populations (for a total of about 5000 specimens) in some smaller islands such as: Elba, Asinara, Capraia, Giglio, Marettimo, Zannone); it is also present in various territories of the peninsula, such as inside the Adamello-Brenta provincial natural park in Trentino, where it was introduced during the seventies, a small population lives in the Belluno Dolomites National Park, in the natural park of the Maritime Alps in Piedmont, in some pre-Alpine areas of Bergamo and Lecco (for example on Mount Moregallo and the Varese Pre-Alps). Populations are also present in the Apuan Alps, in the central-northern Apennines and on the Gargano.
Due to its food needs, the mouflon often frequents very diversified pasture habitats; in any case, the mouflon prefers open environments in hilly areas, often with the presence of rocky areas where you can take refuge in case of danger; however, it has adapted to a great variety of habitats, from coniferous forests to deciduous forests, reaching altitudes of 1500 m as well. 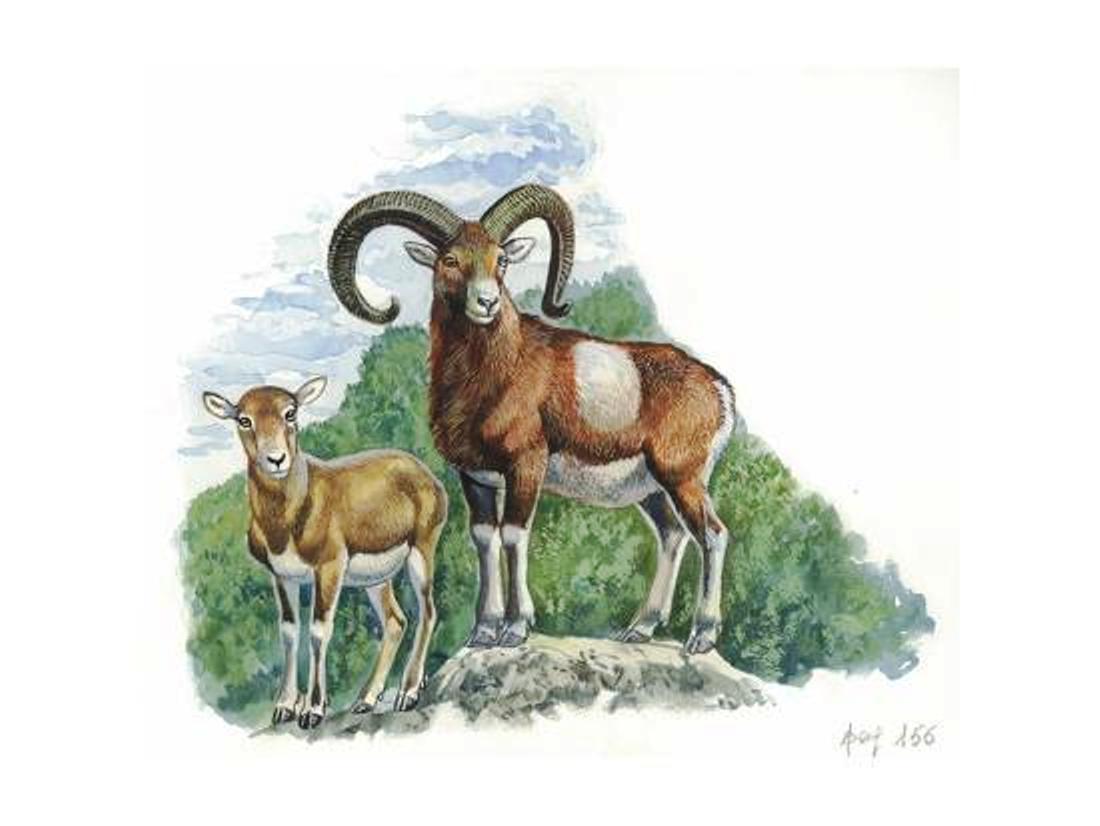 Description –
The Ovis musimon is a mammal of about 130 cm in length, with a height at the withers of about 75 cm, with a weight that varies between the maximum 25 kg of the female and the 40 kg of adult males.
It is recognized for having a bristly hair, tawny in summer and dark brown in winter, with grayish and blackish tones on the shoulders and neck.
The muzzle, the inner part of the ears, a periocular circle, the belly, the back and the distal part of the legs are white.
In addition to the difference in weight in males, there is often a white “saddle” on the back, absent in females, which are brown in color.
Another feature of males is the presence on the skull of two large fixed horns on a bone base, which have continuous growth with a tendency to spiral in the lateral direction: the horns of the mouflon have a high spectacular effect, which makes old males in particular a trophy much coveted by hunters. More rarely reduced horns may be present in females.

Biology –
For the mouflon, the mating season usually takes place in October, even if in colder environments the period can fall even later.
During this season, the males approach the flocks of females, attracted by the smell of their flair, and compete with each other to attract attention and therefore be able to mate. Conflicts between males are normally resolved with frontal collisions of the horns or with shoulder-to-shoulder fighting, generally without the challengers causing serious injuries, thanks to the strong ritualization of the process.
In these fights the two males position themselves frontally, puffing and shaking their heads, until, almost in unison, they take a short run and jump against each other with a violent impact, the noise of which can also be heard at a great distance: the big horns and the strong cranial and neck bones protect the animal from bone injuries.
Shoulder-to-shoulder combat is less violent as the animals push each other with their horns crossed. It can happen that the horns of the two challengers get stuck with each other and that therefore the two contenders, unable to lead a normal life, die of starvation or because of predators in the event that they are unable to free each other .
After mating, arrived between late February and late April, pregnant females, after a gestation of 150/160 days, leave the group and give birth, isolated, 1 or 2 babies, who are able to move and walk immediately after birth and who must be breastfed about every 15 minutes. When summer comes, the females with their offspring (and young males, up to 2 years of age) gather to form flocks of 30-40 individuals.
The weaning of young people takes place around 6 months while sexual maturity is reached around 12-14 months.
The average life expectancy of male mouflons is around 12 years and 15 years for females.
Remember that the mouflon and the sheep can easily mate.

Ecological role –
The taxonomic status of the European mouflon, like that of the whole Caprini subfamily, is still very much discussed: studies carried out on the DNA of the various species ascribed to this subfamily have shown similarities between species considered phylogenetically distant and vice versa. The mouflon has shown strong genetic and morphological similarities with Ovis orientalis, to the point that many authors would currently consider a more correct classification of these animals as subspecies of O. orientalis.
From the behavioral point of view, the mouflon is a diurnal animal with gregarious habits: the females with the young live throughout the year in large flocks, while the young males form separate groups and less numerically consistent, usually composed of animals of the same age. Older males, on the other hand, are used to living alone.
In the same way as wild goats, the mouflon does not normally assume a territorial behavior, although it has preorbital, interdigital and inguinal odoriferous glands capable of marking the boundaries of the territory: in the case of conflicts for the territory or the mating, however, the male shakes nervously head from side to side as a sign of threat to opponents.
As far as food is concerned, Ovis musimon even if, as mentioned, it is a grazing animal, it feeds a bit on all foods of plant origin. It is also able to graze the hard and leathery plants rejected by most of the Ungulates, thus managing to survive in particularly arid habitats.
The mouflon populations can be limited by natural enemies which are the wolf and the fox that occasionally hunts the young.
The mouflon was particularly sensitive to the wolf’s return to Italy. Coming from wolf-free areas (Mediterranean islands) he has not developed effective techniques to escape predation, especially in snowy areas. So in some areas, where the presence of the wolf has consolidated, the mouflon has become extinct, as in the Casentino forests or greatly reduced in number, such as in the Tuscan-Emilian Apennines.
A particular link is that which, most likely, existed between this animal and man. Many scholars speculate that these animals are actually ancestral sheep, introduced by man in island environments and re-established over the millennia, rather than the progenitors of the current sheep, as had always been believed until a few decades ago.
From the point of view of its conservation, the mouflon is no longer at risk of extinction, is present throughout Europe and is everywhere subject to hunting. In the peninsula it is a huntable species, but only in selection like almost all ungulates, except wild boar.
In recent years there has been a change in the management of the hoofed animal at a hunting and non-hunting level, given that the presence of the wild allochthonous in the peninsula has begun to be considered, harmful to the other native wild animals, primarily the chamois of the Alps, leading to coexistence problems. This has changed the action of the hunting harvesting plans from conservative to regulatory, in order to avoid the expansion of the individual nuclei already present and adapted to the territory. In certain situations, the total eradication of the mouflon has been decided.
The Ovis musimon is instead a protected species in Sardinia, where more than 6000 animals currently live.
In recent decades, thanks to the activity of the former forestry agency of Sardinia, numerous reintroductions have been made to the areas where it had disappeared. Here the biggest threats are poaching, sheep farming in the wild and stray dogs.