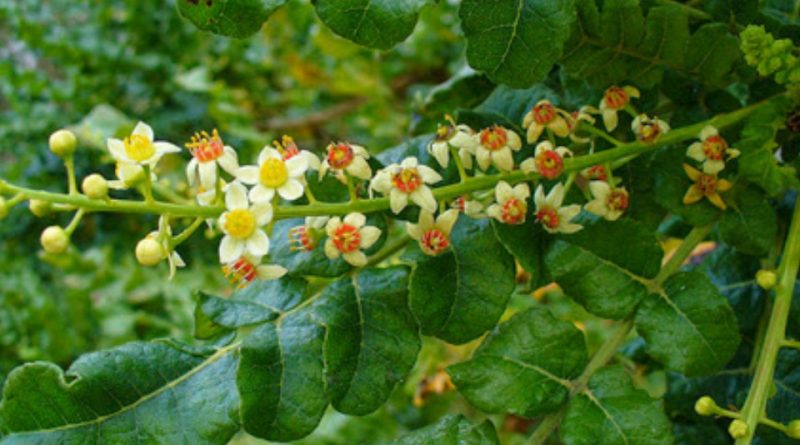 The Indian incense (Boswellia serrata Triana and Planch.) Is an arboreal species belonging to the Burseraceae family.

Systematic –
From a systematic point of view it belongs to the Eukaryota Domain, the Plantae Kingdom, the Magnoliophyta Division, the Magnoliopsida Class, the Sapindales Order, the Burseraceae Family and therefore to the Genus Boswellia and the Species B. serrata.

Etymology –
The term Boswellia of the genus was honored to the Scottish briologist John Boswell (1710-1780), a member of the Royal College of Physicians in Edinburgh.
The specific epithet serrata means serrated, from greenhouse saw: usually referred to the margin of the leaves.

Geographical Distribution and Habitat –
Boswellia serrata is a tree native to an area between India, Africa and Arabia. In India it is widely distributed throughout the territory, mostly concentrated in the states of Madhya Pradesh and Rajastan, where it forms strips of almost pure forest.
Its habitat is that of tropical dry deciduous forests, very dry teak forests or mixed dry deciduous forests, at altitudes up to 1,150 meters where it is often found on slopes and ridges, as well as on flat land, reaching larger sizes on fertile soils. 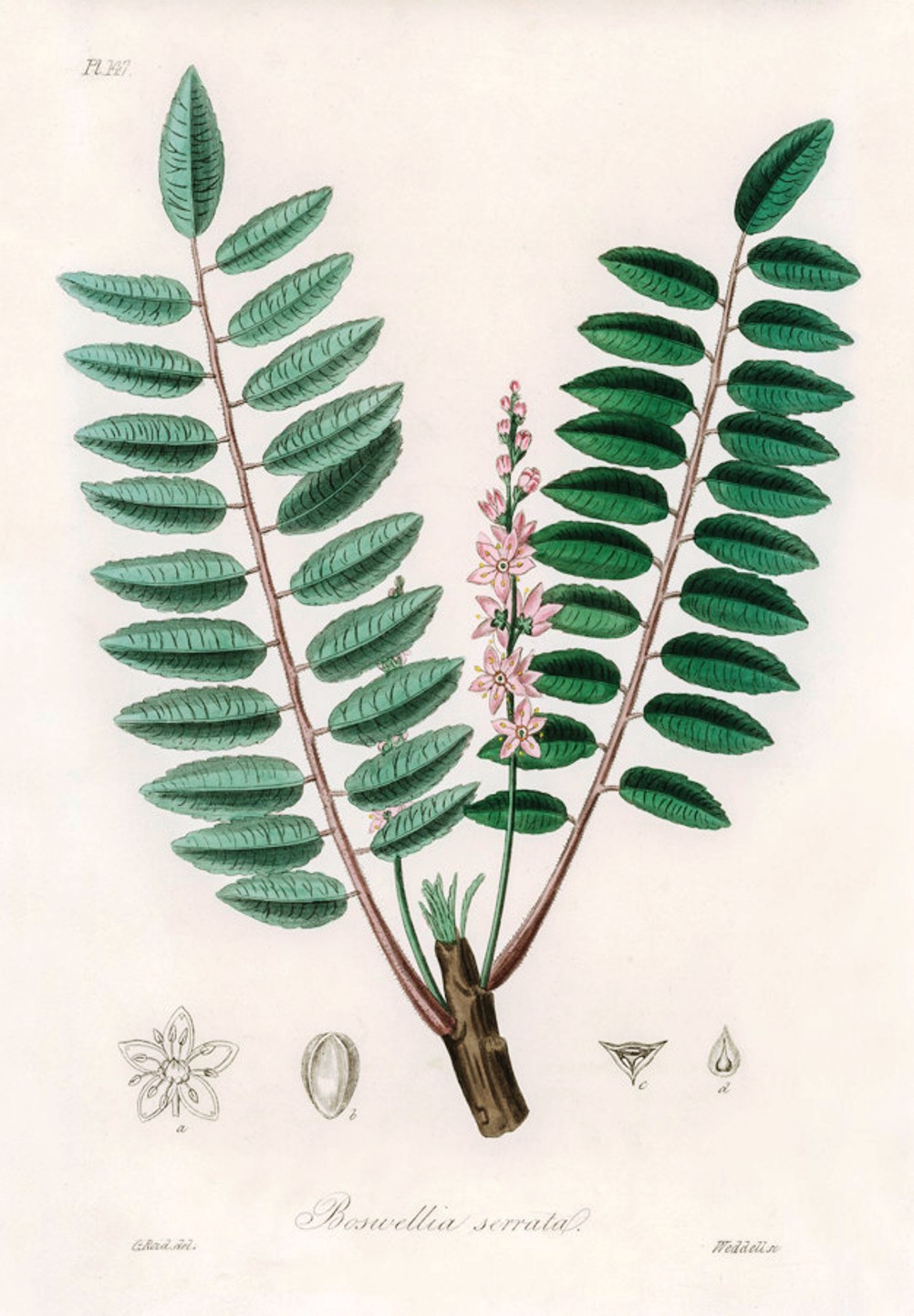 Description –
Boswellia serrata is a medium-sized deciduous tree with a light and sparse crown and slightly hanging branches.
It usually grows from 9 to 15 meters in height, with a generally short trunk, 3-5 meters long, but is sometimes longer if grown in areas of dense forests.
The leaves are composed, imparipinnate, with 6-8 pairs of sessile leaflets arranged in two lateral rows, with a crenate-wavy margin.
The flowers are small (about 8 mm in diameter), carried in racemose inflorescences, with 5-toothed green calyx, corolla of 5 white free petals, 10 stamens and 1 pistil.
The fruit is an obovoid capsule (8–12 mm x 6–7 mm), with an acute apex, consisting of 3-5 valves each containing a seed.

Cultivation –
Indian incense is a slow-growing plant that lives spontaneously but can be grown in particular conditions for both industrial and ornamental purposes.
Propagation can take place from seed which however has a short germination and it is better to sow it as soon as it is ripe.
It grows best in areas where annual daytime temperatures are between 33 and 42 ° C, but can tolerate temperatures between 7 and 47 ° C.
Mature plants can die at temperatures of -2 ° C or lower, but new growth can be severely damaged at -1 ° C.
It prefers an average annual rainfall of between 1,000 and 1,500 mm, but tolerates values ​​between 500 and 2,000 mm, even if the plants now franked are very resistant to drought.
It requires a sunny position and grows well on neutral soils above gneiss, shale, quartzite, limestone and sandstone and has the ability to thrive in poorer and shallower soils.
It prefers pH values ​​in the range 5.5 – 6.5, tolerating 5 – 7.4.
The tree produces root suckers and is very resistant to fire damage.
A mature tree produces about 1 – 1.5 kg of rubber on average per year.

Uses and Traditions –
Boswellia serrata is one of the plants that produces Indian incense and from which a golden yellow transparent gum is obtained which hardens slowly.
The plant has a long history as a medicinal use in India, especially as a use in Ayurveda. There are documents dating back over 2000 years. The tree is harvested in the wild, especially for its gum and bark, which are marketed locally and internationally. It is also used in replanting for poor soils and is sometimes cultivated as an ornamental plant.
It is a particularly useful plant for the repopulation of dry sandstone hills that have been deprived of vegetation, where the soil is markedly ferruginous and where complete protection from biotic factors is not always possible. In such circumstances, its ability to resist the adverse effects of forest fires, its immunity to the exploitation of fodder, its power to resist the effects of insolation and drought and its ability to reproduce from seeds, suckers or other forms vegetative is exceptional.
Indian frankincense resin contains substances that can reduce inflammatory states.
Furthermore, an edible gum is obtained from the plant.
Modern research has shown the presence of a rubber, a resin and an essential oil.
Boswellia serrata contains various forms of boswellic acid including β-boswellic acid, acetyl-β-boswellic acid, 11-keto-β-boswellic acid and acetyl-11-keto-β-boswellic acid.
Phytosterol has been reported to contain b-systosterol, while an alcoholic root extract has shown anticancer activity against human epidermal carcinoma of the nasopharyngeal tract.
Alcoholic extracts of both the root and the fruit showed CNS depressant activity.
Both the fruit and stem extracts showed hypoglycaemic activity.
The non-phenolic faction of the resin showed marked sedative and analgesic effects.
The bark and gum obtained from this plant are alteratives, expectorants, aromatic, demulcent, diuretics, emmenagogues and refrigerants.
The resin is used in the treatment of chronic lung diseases, diarrhea, dysentery, lung diseases, menorrhea, dysmenorrhea, gonorrhea, syphilitic affection, piles and liver disorders.
A resin-based paste, combined with coconut oil or lemon juice, is applied to ulcers, indolent swellings, carbuncles, blisters and ringworm.
The oil extracted from the gum is prescribed with a demulcent drink in the treatment of gonorrhea.
A fiber obtained from the bark is used to produce ropes.
The wood is of low quality, sometimes it is used for objects such as cheap furniture, tea boxes, bowls, dishes, etc. and as a source of pulp for paper production.
Furthermore, wood has recently become famous as a raw material for cellulose and newsprint. Experiments show that it is possible to prepare write-resistant paper when 25-40% is mixed with long-fiber bamboo pulp.
Wood is also used as a fuel and to produce coal. The coal produced from it is particularly suitable for melting with iron.
Incense is used mainly in folk medicine for the preparation of ointments against sores and skin rashes.

Method of Preparation –
In addition to obtaining rubbers and resins, Boswellia serrata extracts are used in soaps, cosmetics, food and drinks.